Floodplains can be broadly defined as a collection of landscape and ecological elements exposed to inundation or flooding along a river system (Figure 24). The floodplain landscapes of the Maranoa-Balonne-Condamine subregion are predominantly lowland-dryland systems incorporating a range of wetland types such as riparian forests, marshes, billabongs, tree swamps, anabranches and overflows (Rogers, 2011). Floodplains are underlain by alluvial aquifers, which are formed from deposited sediments such as gravel, sand, silt and/or clay within river channels or on floodplains. Water is stored and transmitted to varying degrees through inter-granular voids meaning that alluvial aquifers are generally unconfined, shallow and have localised flow systems (DSITI, 2015). Groundwater expressed at the surface supports GDEs occupying drainage lines, riverine water bodies, and lacustrine and palustrine wetlands. Ecosystems associated with the subsurface expression of groundwater include fringing riverine communities and woodlands occupying less frequently flooded floodplain sites.

The zone of potential hydrological change intersects with temporary lowland streams (‘Temporary lowland stream’ and ‘Temporary lowland non-GAB GDE stream’ landscape classes) and can be described as showing limited alluvial development (i.e. width of alluvium of between 100 to 400 m). These alluvial land forms support predominantly river red gum (Eucalyptus camaldulensis) and E. teriticornis fringing drainage lines and more extensive stands of poplar box (E. populnea) further from the channel itself. There are also small stands of brigalow (Acacia harpophylla) and Dichanthium sericeum and/or Astrebla spp. grassland on these alluvial plains. Given the temporary nature of the surface water regime across this landscape group, it is likely that these vegetation communities require reduced flooding frequency, duration and depth in comparison to more permanent lowland riverine systems such as those fringing the Condamine River (Holloway et al., 2013). 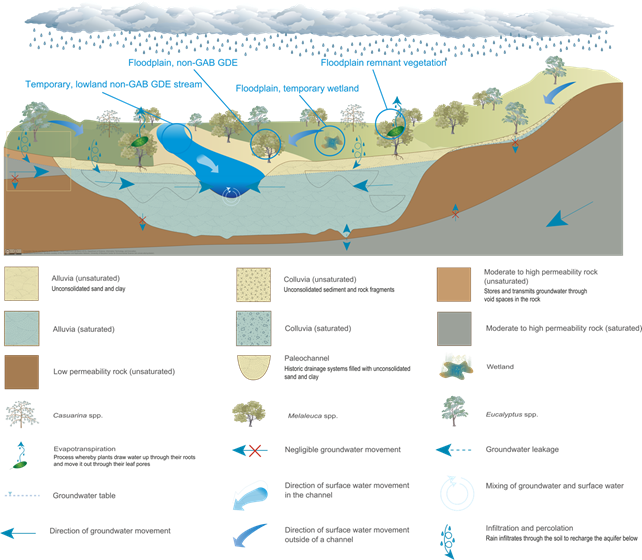 The model includes four of the nine landscape classes in this landscape group that are located within the zone of potential hydrological change. This model is typical of a ‘losing’ riverine system whereby the predominant flow path in the hyporheic zone is downwards.

Drawdown in the regional watertable can affect groundwater-dependent vegetation and surface water – groundwater interactions in watercourses. However, good hydraulic connection between the alluvium and the river, which is typical of floodplain and lowland riverine environments, minimises potential groundwater level changes near watercourses. The representation of watercourses by the OGIA regional model:

effectively assumes that all surface watercourses act as discharge boundaries and hence cannot leak is considered to be a conservative assumption from an impact point of view. This assumption is consistent with work undertaken by Hillier (2010) which suggested that alluvial strata within the GAB typically act as a drain for the underlying sediments (GHD, 2012, p. 57).

Previous research has revealed links between groundwater depth and tree condition, but critical thresholds that lead to rapid and potentially irreversible change have been difficult to quantify. Maximum rooting depth in a global study was 5.2±0.8 m for sclerophyllous shrubland and forest, 7.0±1.2 m for trees and 9.5±2.4 m for desert vegetation (Canadell et al., 1996), indicating that semi-arid floodplain trees are likely to have relatively deep root systems. Kath et al. (2014) used data from two dominant floodplain species, river red gum (E. camaldulensis) and poplar box (E. populnea) at 118 sites in the Condamine river basin to present evidence for a critical drawdown threshold in the range from 12.1 to 22.6 m for river red gum and 12.6 to 26.6 m for poplar box beyond which canopy condition declined abruptly. Another study in a water-limited riparian environment found that transpiration decreased in response to a 9-m decline in groundwater levels, but that changes to foliage density were more influenced by variability between seasons and site conditions (Pfautsch et al., 2015). Tree water uptake of groundwater when growing over deeper watertables is generally less than where the watertable is shallower (e.g. Zencich et al., 2002; O’Grady et al., 2006a, 2006b). The rate of drawdown can also be critical to vegetation survival. Plant roots can remain in contact with a declining watertable if the rate of decline does not exceed potential root growth rate; 3 to 15 mm/day for arid shrub and grass species (Naumberg et al., 2005).

A knowledge gap in the ecohydrology of groundwater-dependent vegetation is how sensitive vegetation is to changes in the rate of groundwater drawdown across different watertable depths and whether this response is linear. Connectivity between the alluvium and the stream channel that arises from longitudinal, lateral and vertical exchange of water is important in floodplain landscapes. This connectivity can be described by surface water hydrological response variables that span the low-flow (no-flow periods, in-channel freshes) and high-flow (bankfull and overbank flows) components of the surface water flow regime. Surface water flow regimes are defined by the timing, frequency, duration, magnitude, discharge volumes and the rates of the rise and fall of the flow events (Bunn and Arthington, 2002; Poff, 2010; Boulton et al., 2014). The following section gives a brief summary of the literature used to guide the qualitative analysis of changes to the surface water regime used in this assessment.

Low flows or flow pulses, sometimes referred to as instream freshes, play a critical role in maintaining longitudinal connectivity, linking instream habitats and allowing for the movement of fish and invertebrates. Longitudinal fragmentation prevents the transport of nutrients, biota and organic material downstream, and creates pool environments along the river channel, the quality of which may vary considerably depending on geomorphic condition, health of the extant riparian vegetation, length of the dry period and input of organic matter (Bond et al., 2008). Short-term flow pulses may also contribute to the maintenance of water quality in interconnected pools through provision of freshwater inputs and the transport of nutrients (Dunlop et al., 2013). Flow pulses may also maintain vertical connection with groundwater by recharging local groundwater and shallow aquifers, thus helping to sustain vegetation along the river’s edge, although this is likely to be only a minor part of the flow regime. Extended periods of no flow or an increase in the frequency of no-flow periods are likely to increase the levels of stress in the system, through deteriorating water quality (e.g. increases in turbidity, reduced dissolved oxygen and increased temperatures, crowding of biota, and reduced hydrological connectivity) (Bond and Cottingham, 2008).

Moderate increases in streamflow (above baseflow) are termed freshes or pulse flows, can last for several days, increase within-stream flow variability and play an important role in the regulation of water quality through the input of freshwater and flushing of deeper pools (Robson et al., 2009). Watts et al. (2009) characterise these flows as pulse flows, and identify small or large pulses and overbank flows. Small pulses exceed baseflow and inundate some or all of the stream bed, for time periods ranging from hours to days. Large pulses are confined to the channel but do not exceed bankfull and typically occur over periods of days to weeks. Flow pulses play an important role in re-setting stream environments through active bedload transport, maintaining channel dimensions and scouring streambeds and banks (Watts et al., 2009). Larger in-channel freshes may represent important spawning triggers (King et al., 2009; NSW DPI, 2014) or inundate benches, anabranches and snags increasing habitat availability (Anon, 2016).

Connectivity between the river channel and the floodplain is essential for ecosystem health (Watts et al., 2009). Overbank flows inundate the floodplains and refresh water in isolated palustrine wetlands, provide opportunities for the migration of riparian and floodplain biota (Boulton et al., 2014) and modify channel geomorphology. Overbank flooding leads to deposition of nutrients and sediments on floodplains (Watts et al., 2009) and provides important wetland habitat for fish (NSW DPI, 2014) and frogs (Watts et al., 2009). The depth, duration, frequency and timing of inundation influences plant growth and survival and plays an important role in determining the spatial structure and health of vegetation communities on the floodplain. Overbank flooding maintains the health of floodplain vegetation through provision of freshwater, leaching of soil salinity and regeneration of floodplain species (Holland et al., 2009; Roberts and Marston, 2011; Doble et al., 2012; Colloff, 2014; Casanova, 2015). However, there is considerable uncertainty associated with the degree of connection between floodplains and alluvial aquifers at local and regional scales (Anon, 2013).

The selection of hydrological response variables was based on current literature on the response of vegetation condition to changes in the hydrological regime and is summarised in Table 9. This includes field observations (e.g. O’Grady et al., 2006a), experiments (e.g. Holland et al., 2009) and empirical modelling studies (e.g. Kath et al., 2014). Hydrological response variables identified for the ‘Floodplain or lowland riverine (including non-GAB GDEs)’ landscape group are maximum drawdown in the regional watertable, annual amplitude of drawdown, rate of annual drawdown and change to groundwater quality.

Maximum drawdown in the regional watertable (or source aquifer) estimated by the regional groundwater model is the only hydrological response variable that is available for this subregion (refer to companion product 2.6.2 for the Maranoa-Balonne-Condamine subregion (Janardhanan et al., 2016)). While estimates of absolute changes in depth to groundwater were not available, the sensitivity of landscape classes to hydrological changes was inferred using ‘threshold type’ responses. This approach assumes that vegetation condition is stable until a critical depth to groundwater level occurs, after which vegetation condition is affected (Kath et al., 2014; Horton et al., 2001; Sommer and Froend, 2014). Critical depth to groundwater thresholds observed for floodplain trees (e.g. E. camaldulensis and E. populnea) relevant to the subregion are 12 to 27 m (Kath et al., 2014; Reardon-Smith 2011), which is similar to E. camaldulensis in other river systems (Horner et al., 2009).