Impacts to water-dependent landscapes and assets are mostly caused by changes to groundwater in the regional watertable, which predominantly affect the ‘alluvium and watercourses in aquifer outcrop areas within and downstream of tenements’ system component identified in the conceptual model of causal pathways. The regional watertable represents the upper groundwater level within the near-surface aquifer, and may exist in different geological units or layers. Near the two additional coal resource developments it occurs in the alluvium, as well as the Main Range Volcanics and the Walloon Coal Measures. Springs and groundwater bores may be affected by hydrological changes in deeper geological layers, which may have repercussions for surface ecosystems surrounding springs.

The regional watertable in the Maranoa-Balonne-Condamine assessment extent occurs in the alluvial and basalt aquifers and parts of the deeper Great Artesian Basin (GAB) aquifers that outcrop in the north, north-west, north-east and east along the Great Dividing Range (Figure 7). The Assessment team used data from the OGIA model to determine the uppermost geological layers in each of the 1.5 km x 1.5 km OGIA model grid cells (~160,000 cells). Numerical groundwater modelling is described in companion product 2.6.2 for the Maranoa-Balonne-Condamine subregion (Janardhanan et al., 2016). 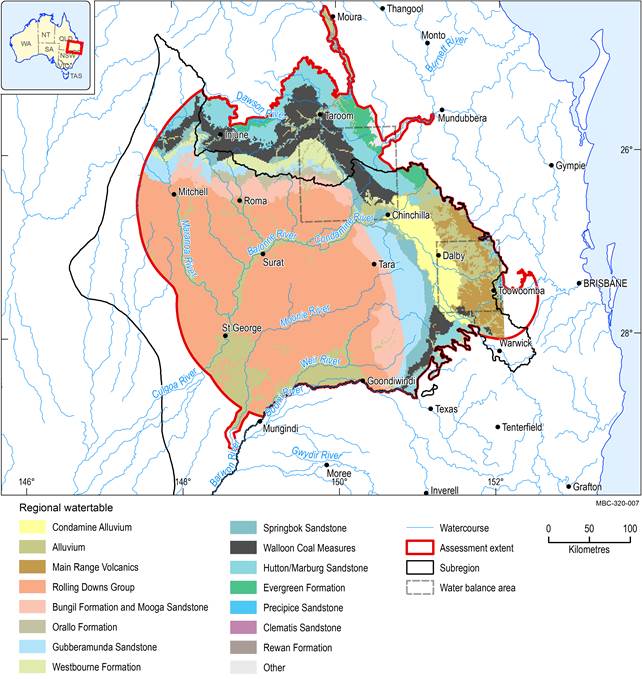 The spatial distribution of geological units in the modelled regional watertable and simplified surface geology in the vicinity of New Acland Coal Mine and The Range are shown in Figure 8 and Figure 9, respectively. The OGIA model is a simple, idealised representation of a complex three-dimensional geologic system that is converted into a three-dimensional mathematical representation of the physical system and flow processes. The model simplifies the regional hydrostratigraphy by grouping geologic formations with similar aquifer properties into model layers representing the major aquifers, aquitards and productive coal measures. 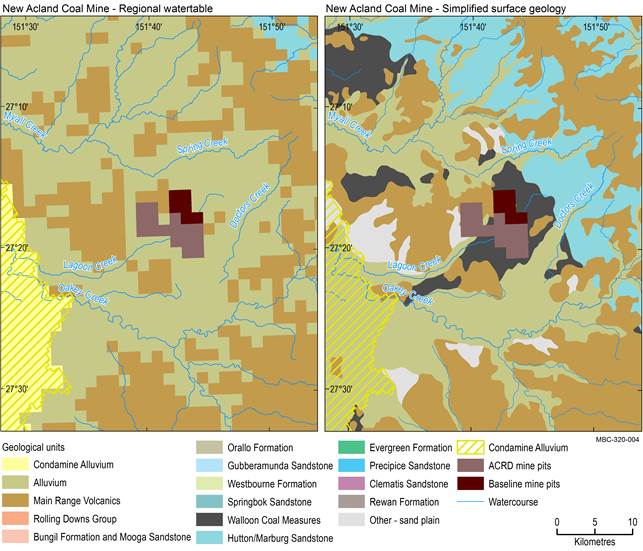 CSG = coal seam gas. The surface geology of layers is simplified to be consistent with the geological units represented in the regional groundwater model. 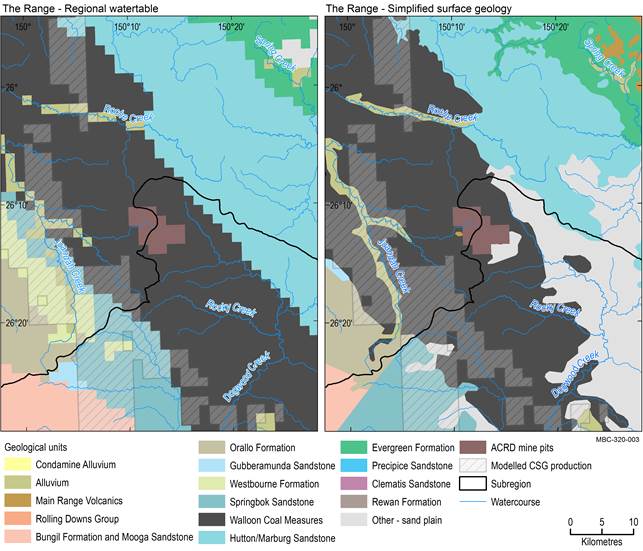 CSG = coal seam gas. The surface geology of layers is simplified to be consistent with the geological units represented in the regional groundwater model.

This Assessment adapted the Office of Groundwater Impact Assessment’s (OGIA) 2012 model and the coal seam gas (CSG) development profile from OGIA’s 2014 annual report (OGIA, 2014). OGIA’s most recent model from 2016 was not available for this Assessment. The models are built for regional groundwater impact assessment in aquifers overlying and underlying the CSG target formations. OGIA also provided data relating to coal mines and their development footprints, which have been used to represent open-cut coal mines in the groundwater model at a regional scale using the 1.5 x 1.5 km grid cells. The area within modelled pits is not reported in this product.

OGIA is an independent entity established to assess and manage cumulative groundwater impacts from resource activities in areas of concentrated CSG development, known as cumulative management areas (CMAs). OGIA has undertaken cumulative assessments to capture the CSG footprints for the Surat and southern Bowen basins in 2012 (QWC, 2012) and 2016 (OGIA, 2016). These are reported through underground water impact reports (UWIRs) and are available from the Queensland Department of Natural Resources and Mines (2016). The UWIRs include predicted impacts on water supply bores and springs.

Most of the Maranoa-Balonne-Condamine subregion falls within the boundary of the geological Surat Basin, which forms part of the wider Great Artesian Basin (GAB). The variably confined layers of complex sandstone aquifers in the GAB are separated and confined by fine-grained mudstone and siltstone aquitards (Ransley and Smerdon, 2012). The intake beds for the GAB outcrop areas cover much of the subregion in the north and the east where the alluvial cover is absent. Important aquifer outcrop areas included in the regional watertable in the north and east of the subregion are:

Coal mining and CSG development in the Maranoa-Balonne-Condamine subregion targets the Walloon Coal Measures of the geological Surat and Clarence-Moreton basins.

All of the OGIA regional groundwater model layers were modelled as confined to improve numerical stability and reduce model run times. In the regional watertable, the OGIA model represented unconfined storage values using the specific yield (Sy) divided by the model layer thickness. By accounting for unconfined model layer thickness in this way, the storage coefficients used in the regional watertable minimise the potential overestimation of drawdown in the watertable.

The range of model predictions for the impact and risk analysis were summarised by the 5th, 50th and 95th percentile estimates of drawdown in the regional watertable and deeper geological layers accessed by bores and springs. Previously, model predictions have been reported for the 95th percentile estimates of drawdown in each model layer (QWC, 2012; companion product 2.6.2 (Janardhanan et al., 2016)).

Maximum baseline drawdown, in excess of 700 m equivalent pressure changes, associated with baseline CSG production, is predicted near the towns of Chinchilla and Roma in model layer 10 – Walloon Coal Measures (see companion product 2.6.2 (Janardhanan et al., 2016)). This geological layer is the target of CSG production and is up to 1000 m below the surface in this area. 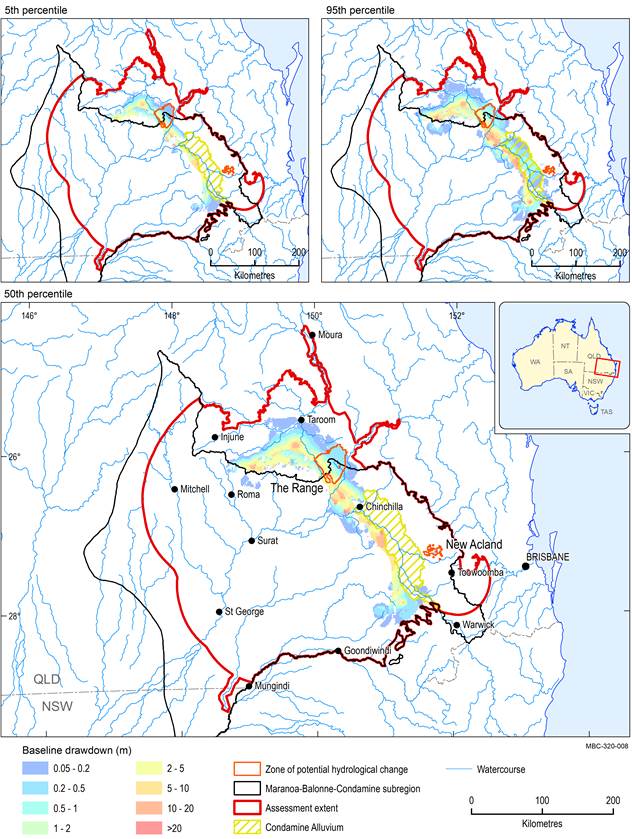 Baseline drawdown is the maximum difference in drawdown (dmax) under the baseline relative to no coal resource development. Estimates of baseline drawdown in the Condamine Alluvium are only available for the 95th percentile as reported in QWC (2012). In a confined aquifer, drawdown relates to a change in water pressure and does not necessarily translate to changes in depth to watertable. The zone of potential hydrological change in the regional watertable is shown for reference.