Changes in surface water quality from coal resource development can occur following disruptions to surface drainage from the removal of vegetation and disturbance of soil in construction of roads, site facilities, excavation of open-cut pits and landscaping of the site during production and rehabilitation. Bare surfaces increase the risk of erosion with potential to increase total suspended solids in waterways. The discharge of mine water into the stream network as part of operational water management is potentially hazardous, if the quality of the discharged water lowers the quality of the receiving water below its current beneficial-use level.

Depressurisation and dewatering of aquifers and changes to subsurface physical pathways between aquifers can lead to a change in baseflow to streams and potentially affect the water quality of the stream. Table 7 lists potential causes of changes in surface water quality from coal resource development in the Maranoa-Balonne-Condamine subregion and identifies the potential for off-site impacts, having regard to the relevance of the causal pathway in the subregion and the likely scale of the effect.

It is likely that the extent of hydrological changes associated with baseline CSG production is limited to watercourses within and downstream of CSG tenements (Figure 21). As the two mines in the additional coal resource development are located in headwater streams, potential effects of open-cut coal mining under the baseline and under the CRDP on the surface water system can likely be managed by site-based risk management and regulation. Surface water quality in the subregion is managed by the Healthy Water Management Plans under Queensland’s Environmental Protection Act 1994 legislation, which will be accredited under the Commonwealth’s Basin Plan 2012 (MDBA, 2012). 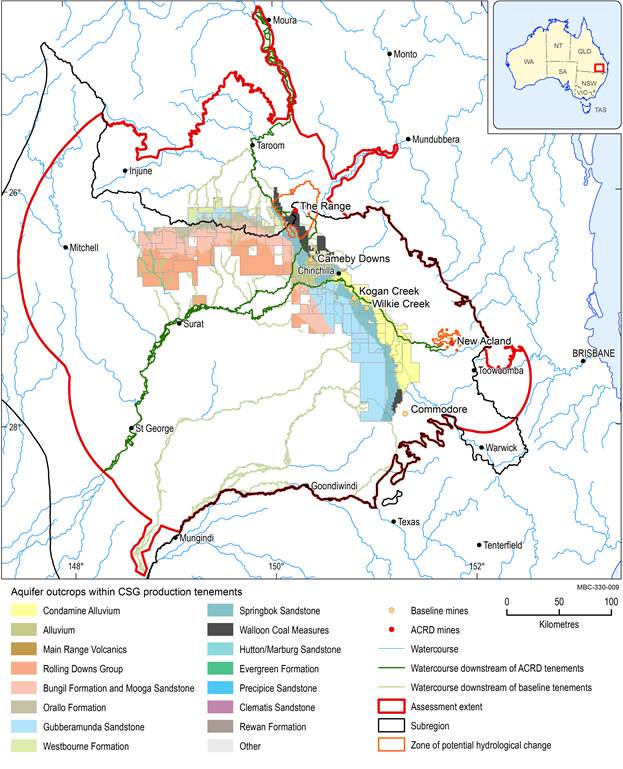