The Maranoa-Balonne-Condamine subregion has an area of 144,890 km2 and is mainly within the Queensland part of the Murray–Darling Basin, with a small area in NSW. It includes the headwaters of the Condamine River and the Maranoa River, as well as the floodplains of the Upper Darling Plains. The main cities and towns are Chinchilla, Dalby, Goondiwindi, Roma, St George, Toowoomba and Warwick (Figure 3).

Most of the land is used for agriculture. Groundwater use varies across the subregion, but is commonly extracted for stock and domestic purposes, as well as for town water supply, agriculture and coal seam gas (CSG) production.

Wetlands in the subregion include seasonal, semi-permanent and permanent wetlands and lagoons. Some of these wetlands are nationally significant. The Culgoa River Floodplains and the Narran Lakes system are downstream of the subregion, with the northern part of the Narran Lakes system identified as an internationally recognised and protected wetland. The subregion is home to a number of water-dependent ecological communities, animals and plants which are listed as threatened under Queensland and Commonwealth legislation.

The Maranoa-Balonne-Condamine subregion is underlain by extensive sedimentary rock sequences associated with several geological basins, including large parts of the Surat Basin, the north-west part of the Clarence-Moreton Basin and the southern Bowen Basin. These sedimentary basins are endowed with nationally significant fossil fuel resources, such as coal and hydrocarbons, and include most of Australia's recognised CSG reserves. There has been a long history of coal mining and conventional petroleum extraction within the Maranoa-Balonne-Condamine subregion, with CSG production from the Surat Basin's Walloon Coal Measures becoming an important driver of coal resource development in the subregion since the late 1990s.

In the context of BAs, coal resource development in the Maranoa-Balonne-Condamine subregion can potentially affect surface water and groundwater systems, and the water-dependent ecosystems and assets that rely on these water resources. Of particular focus in this Assessment is understanding the potential for cumulative hydrological impacts arising from the interaction of open-cut coal mining operations and CSG production in the subregion. This analysis especially applies to those coal mines likely to begin commercial operations after 2012, termed additional coal resource development in the BAs (see Section 3.1.2 for further details about the baseline and CRDP).

This assessment used the Office of Groundwater Impact Assessment’s (OGIA) 2012 model that was adapted to include open-cut coal mines in both the baseline and the CRDP, compared to previous versions that only included CSG developments. OGIA’s most recent model was not available for this Assessment (OGIA, 2016). OGIA is an independent entity established to assess and manage cumulative groundwater impacts from resource activities in areas of concentrated CSG development, known as cumulative management areas (CMAs). The Surat Cumulative Management Area (CMA) includes almost the entire Maranoa-Balonne-Condamine assessment extent. 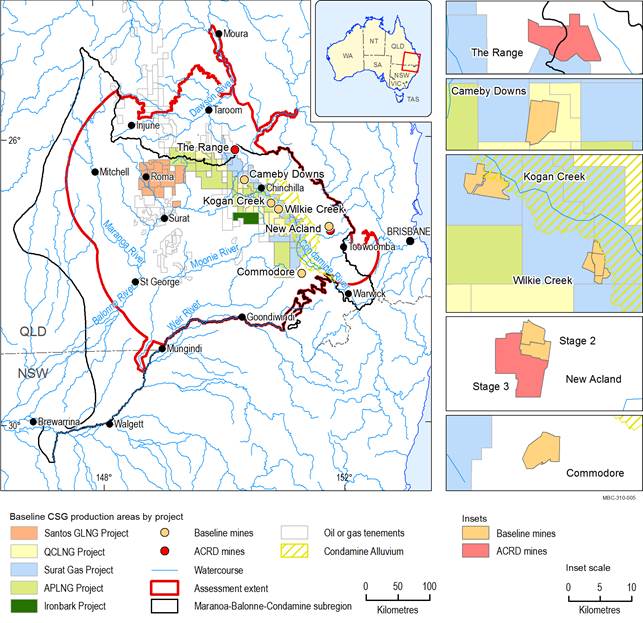