This bioregional assessment helps us understand how coal seam gas and coal mining development could affect water resources and water-dependent assets in the Cooper subregion. It identifies where potential impacts might occur, as well as the areas that are unlikely to be affected. Work done by the South Australian government has contributed to this bioregional assessment.

This bioregional assessment found that there is no potential for coal mining in the Cooper subregion. One advanced coal seam gas proposal was identified: the proposed Southern Cooper Basin Gas Project, which targets coal seam gas in the Patchawarra Formation (a geological unit). Should it go to production, the project may increase surface water flows into Strzelecki Creek. Springwater levels of the Lake Blanche Springs are unlikely to be affected.

The Cooper subregion spans south-west Queensland and north-east South Australia. It is part of the Lake Eyre Basin bioregion and adjoins the Galilee subregion in the north-east. Localities in this sparsely populated subregion include Innamincka, Cameron Corner and Moomba. All of the rivers and lakes in this subregion are seasonal. Major streams include the Cooper Creek and the Thomson, Barcoo and Bulloo rivers. Significant nature conservation areas in this subregion encompass a number of protected areas and wetlands, including the internationally recognised Coongie Lakes and Lake Pinaroo.

Several related projects investigated the surface and groundwater resources in coal basins within the Lake Eyre Basin, including: 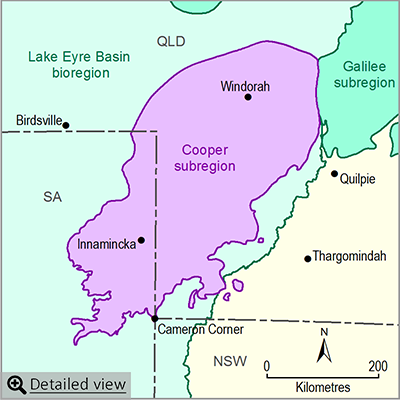