The model is built directly upon the three-dimensional geological model (Bioregional Assessment Programme, Dataset 1) described in Herron et al. (2018) and shown in Figure 6. It uses the nine geological horizons above the base of the Permian horizons (P900) and topographic data (Geoscience Australia, Dataset 2, Dataset 3) to define nine regional groundwater model layers of varying thickness. At this stage it is a coarse geometric model with no coal seams, alluvium or hydraulic properties, as illustrated with a representative cross-section in Figure 8.

The location of the cross-section (A-A’) is shown in Figure 6.

To better represent near-surface groundwater processes, two additional layers are added at the top of the model:

Because the horizons in the geological model outcrop in places, some areas have fewer than 11 layers. These discontinuities are unwieldy to implement in the groundwater model because many small finite elements are necessary to precisely represent an outcrop in the model. To simplify the mesh and improve computational efficiency, the missing layers have been extended into these areas and given a minimum layer thickness of 10 m, which ensures there are 11 continuous layers throughout the entire model (ranging in thickness from 3 m to 1650 m, with mean 36 m). This minor modification is a common approach in groundwater modelling (Barnett et al., 2012). It will not have a noticeable effect on predictions because the hydraulic properties (conductivity and porosity) assigned to the extensions may be defined based on the lithology of the area in which they occur (see below), not just upon layer number.

Figure 9 depicts a vertical cross-section of the final finite-element mesh (construction details are given below) showing the layer immediately below P500 up to topmost layer (the 3 m thick layer at the model’s top). In the cross-section shown in Figure 9 the layers above P000 have outcropped in the geological model, but the horizons P000, M700 and M600 have been shifted downwards to ensure these layers do exist in the groundwater model with a minimum layer thickness of 10 m (see Figure 7 for an explanation of these horizons). Other aspects of Figure 9 are discussed below. The model geometry does not represent any geological structures, including the major fault structures that are known in the geological Sydney Basin. 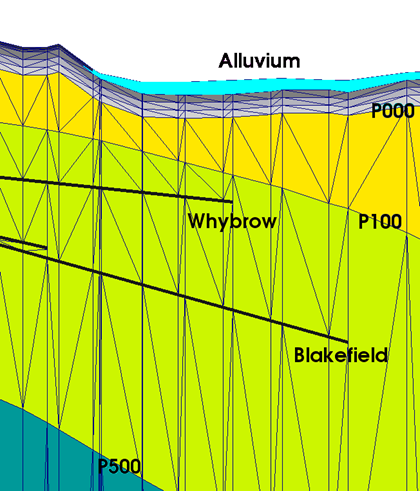 The geological layers are differentiated by colour and labelled: P500, P100 and P000. The finite-element mesh is shown as thin blue lines. There is a vertical exaggeration of 10.

Coal seams are not represented explicitly in the geological model, so additional layers are created in the vicinity of mines within the groundwater model to ensure their accurate representation in the groundwater model. Every working seam for every mine working listed in Section 2.1.6 of companion product 2.1-2.2 for the Hunter subregion (Herron et al., 2018) is represented as a disc, as illustrated conceptually in Figure 10. Each disc is planar and has a radius that just exceeds the spatial extent of its associated mine workings. It is placed at the depth, dip angle and direction within the model corresponding to the working seam, as shown in Figure 10. If a disc’s geometry causes it to outcrop, the outcropping areas are ‘bent down’ so that they remain within the three-dimensional model.

Because each disc is planar, they do not accurately represent the undulating nature of real coal seams, and because they only exist in the vicinity of each mine workings they do not represent the continuous nature of coal seams that may exist for tens of kilometres. The discs do not affect water flow any more than the horizons affect water flow: water flows along the plane of the disc just as it flows along the horizons. Nevertheless, including these discs in the geometry of the model has the advantages of (i) increasing the number of layers in the vicinity of mines, which means a more accurate representation of both the lithology and water head in the vertical direction, and (ii) allowing water to be withdrawn from the model at approximately the correct depth. Note that water is not withdrawn from the entire disc, just from the mine-workings polygon (Section 2.1.6 of companion product 2.1-2.2 for the Hunter subregion (Herron et al., 2018)) superimposed upon the disc, as described in Section 2.6.2.5.2. 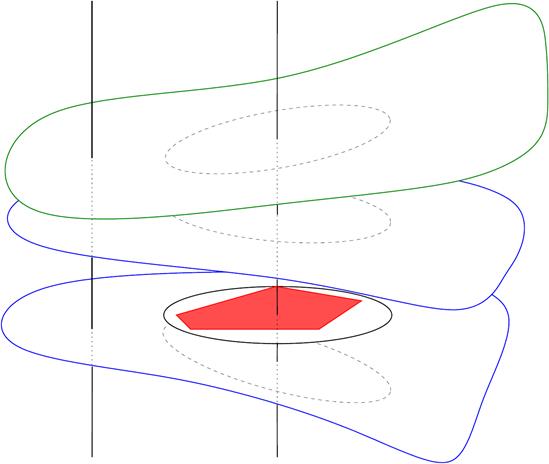 Figure 10 Conceptual representation of disc insertion into the groundwater model

The green area represents a portion of the topography and the blue represents two subsurface horizons from the regional geology model. A disc (in black) is inserted between the two horizons to represent a coal seam around a mine workings (in red). Dashed lines represent the superposition of the seam disc upon the horizons and the topography. Insertion of the disc means there is one model layer more on the right-hand vertical line compared to the left-hand vertical line.

The groundwater model is built such that the hydraulic properties at any location may be dependent upon the layer number and lithological classification at that location. This makes the modification of horizons to avoid explicit outcropping less important, as hydraulic conductivity needs not be uniform across an entire layer. The explicit parameterisation of hydraulic conductivities is presented in Section 2.6.2.6.

As previously stated, a layer is included at the top of the model to represent the alluvium. The spatial extent of the alluvium is defined by the mapped alluvium (Bioregional Assessment Programme, Dataset 5) and the regolith thickness (CSIRO, Dataset 6) (see Section 2.1.3.1.2 in companion product 2.1-2.2 for the Hunter subregion (Herron et al., 2018)). The model treats the alluvium as another lithology, yielding seven different lithologies in total. Locations classified as ‘alluvium’ occur in the top two layers of the model only – that is, the topmost uniform 3 m thick layer and the layer defined by the regolith thickness. The alluvium thickness is non-uniform and equal to the regolith thickness. Alluvium is evident in Figure 9 in the top two layers.

The numerical solver, MOOSE, uses the finite-element technique. The finite-element size in plan view is chosen to be 500 m in the vicinity of the mines, and up to 15 km elsewhere. Triangular elements are used. The plan mesh is shown in Figure 11. The finer mesh clearly identifies the areas of mining within the Hunter subregion. Also visible is a higher density of elements along the river network. More finite-element nodes were included along the rivers to provide higher resolution output of the change in baseflow for input into the Australian Water Resource Assessment river (AWRA-R) model (see companion product 2.6.1 for the Hunter subregion (Zhang et al., 2018)). The resulting mesh has 29,248 triangular elements in plan view, covering an area of approximately 34,000 km2. 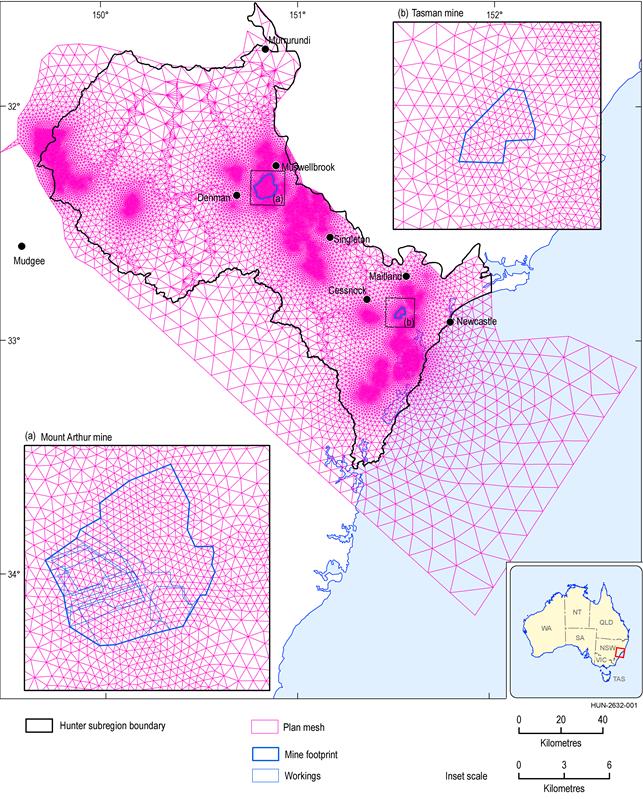 Where possible, the plan mesh conforms to the mine polygons (see Section 2.1.6 of companion product 2.1-2.2 for the Hunter subregion (Herron et al., 2018)). However, this is not always possible due to overlapping polygons in multi-seam workings and complicated mines, and where polygons overlap with river polylines. Figure 11 illustrates conforming and non-conforming mine polygons: In inset (a) of Figure 11, which shows the mine polygons (in blue) for Mount Arthur mine, there are too many polygons for the mesh to faithfully conform to each one; In inset (b) of Figure 11 the mesh around the Tasman mine (in blue) conforms perfectly with the mine footprint. Figure 11 also shows the fairly coarse scale used in the model. Mesh elements must be labelled as either ‘inside’ or ‘outside’ each mine polygon, so that the non-conformance of some mine polygons means that the mined area may be misrepresented in the model by up to 250 m (or half the size of an element). This does not mean that a greater or lesser amount of groundwater is extracted by the mine (as those rates are fixed for each mine: see Section 2.6.2.5) but that the position of the mine relative to points of interest, such as rivers, may be inaccurate by up to 250 m. Given the wide range of parameter values modelled as part of the probabilistic approach to modelling, this small error in positional accuracy is unlikely to significantly affect the range of predicted drawdowns and changes in surface water – groundwater fluxes.

In the vertical direction each layer is defined by a single element. The plan mesh is swept vertically through the 11 model layers to create 321,728 wedge elements. These are further subdivided by the seam discs in the vicinity of the mines to yield a total of 340,811 wedge elements.

A sample cross-section of the finite-element mesh is shown in Figure 9. The alluvium can be seen within the top two layers with non-constant thickness; the other layers also vary in thickness, but with a minimum thickness of 10 m. Figure 9 also shows an explicit example of disc insertion. The layer between horizons P500 and P100 is split by three seam discs. The discs corresponding to the Whybrow and Blakefield coal seams have been labelled. The insertion of the discs means that in this cross-section the groundwater model has either 11 layers (where there are no discs), 12 layers (where there is just 1 disc), 13 layers (2 discs) or 14 layers (at places where 3 discs exist).