The geology is characterised by near horizontal sandstone, shale and coal beds, which have undergone mild deformation. It is represented as nine horizons in the regional-scale geological model built as part of the BA for the Hunter subregion (Figure 6), described in Section 2.1.2 of companion product 2.1-2.2 for the Hunter subregion (Herron et al., 2018). Figure 7 shows how the geological model layers map to the stratigraphic sections in the Hunter subregion coalfields (see also Table 4 in Herron et al. (2018)). The groundwater model is built directly upon this broad-scale layer-cake conceptualisation of the Hunter geology, but includes worked coal seams only in the vicinity of mines. Small local-scale geological and geophysical features are not represented in the geological model. It is acknowledged that faults may be important in the hydraulic connectivity of fractured rock and alluvial aquifers in some locations and would need to be considered in more local-scale analyses. 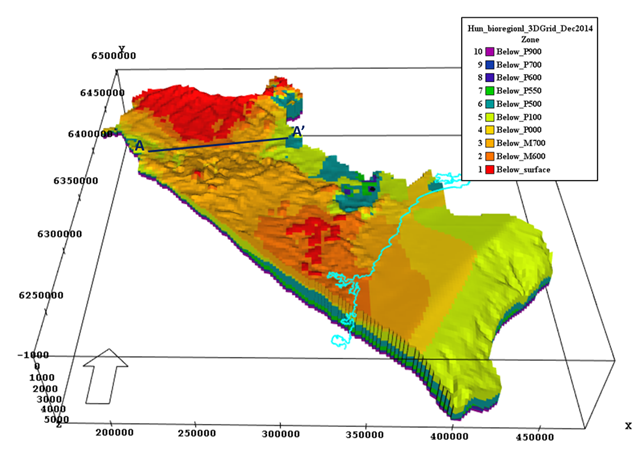 Colours/labels represent layers in the geological model and correspond to changes in stratigraphy shown in Figure 7. A-A’ identifies the location of the cross-section shown in Figure 8. 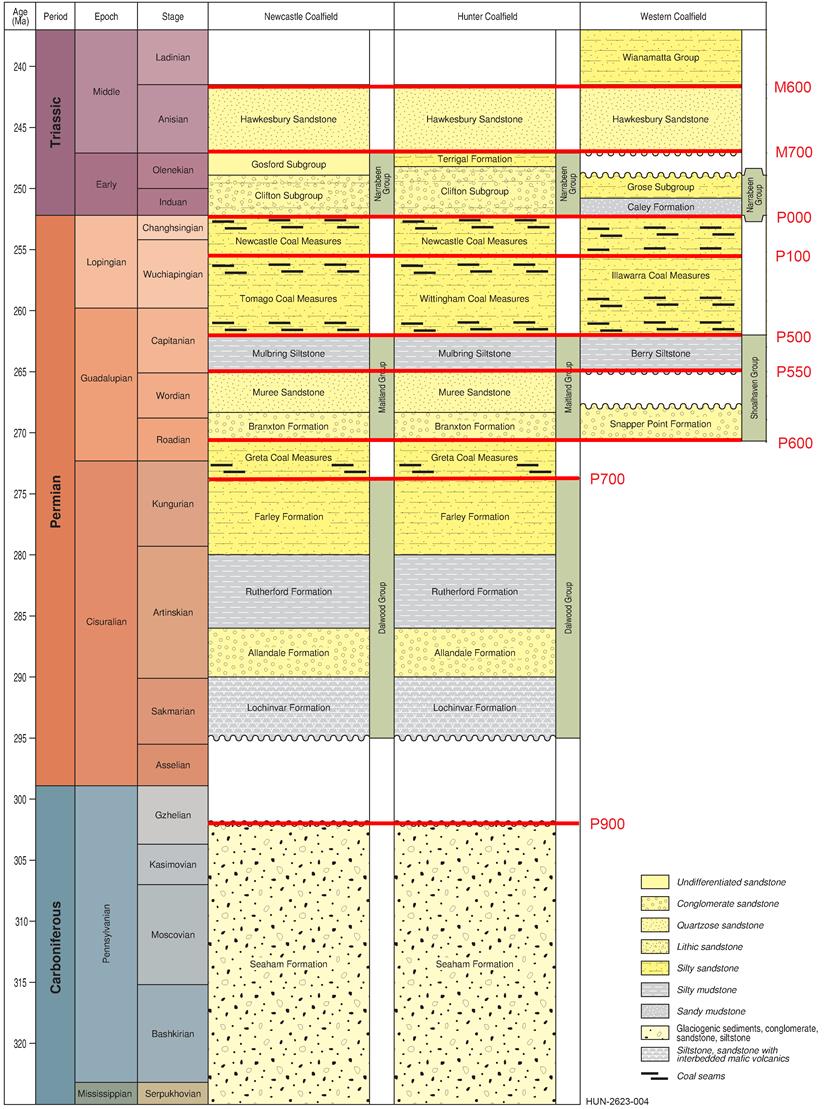 Figure 7 Generalised stratigraphic column of the Permian and Triassic units in the main coalfields of the Hunter subregion, showing the corresponding layers in the Hunter geological model

Hydrogeologically, it is typical for the sandstone layers to act like aquifers, whereas shale and siltstone layers have hydraulic properties typical of aquitards. Non-alluvial near-surface rock units are typically more weathered and have higher hydraulic conductivities than deeper rock units and are commonly only partially saturated. However, an analysis of hydraulic conductivity measurements from 577 points throughout the Hunter subregion shows little correlation with lithology and stratigraphy (Figure 26 and Figure 27 in companion product 2.1-2.2 for the Hunter subregion (Herron et al., 2018)). A weak correlation with depth is evident. Quaternary-age alluvial deposits occur along the main river valleys and coastal sand beds around the Hunter River estuary and along the coastal plain. They are important sources of fresh groundwater for the subregion and have higher hydraulic conductivities than the underlying rocks.

The subregion boundary to the north-eastern side is defined by the Hunter-Mooki Thrust Fault, which separates the geological Sydney and Werrie basins. Since this is the edge of the basin, it is assumed to be a zero-flow boundary, as discussed further in Section 2.6.2.4. Groundwater flow can occur across the other boundaries, which are defined by surface water catchment boundaries and in the ocean approximately 100 km offshore (see Section 2.6.2.4). Regional-scale groundwater flow generally follows the direction of the topography from north-west to south-east.

Rainfall recharge is the major input to the groundwater systems, but losses from streams can also recharge aquifers. In Section 2.1.5 (see companion product 2.1-2.2 for the Hunter subregion (Herron et al., 2018)), estimates of baseflow were found to be highly variable but may be of the order of 10% of recharge to the groundwater system. Discharges of groundwater to draining streams (i.e. baseflow) are important for sustaining flow in many streams, but estimates of their contribution to total flow are highly variable. Because of this uncertainty, model parameters that control baseflow are varied in the uncertainty analysis (see Section 2.6.2.7).

Coal mining is undertaken using open-cut, longwall and bord-and-pillar mining methods in the three major coalfields of the Hunter subregion. These methods of coal extraction involve mine dewatering, resulting in aquifer depressurisation. The methods of extraction modify subsurface physical flow paths, particularly above longwall mines where hydraulic enhancement is an inevitable consequence of collapsing the longwall panels. The effects of these changes are drawdown of watertables and changes in the magnitude and timing of discharges to streams that intersect groundwater.

Details of the datasets and data analyses that have informed the conceptualisation and development of the groundwater model are provided in Section 2.1.3 of companion product 2.1-2.2 for the Hunter subregion (Herron et al., 2018). They include the mapped extent of the Hunter alluvium (Section 2.1.3.1.1), the generation of a spatially varying rainfall recharge surface for the subregion (Section 2.1.3.2.1), and results from the analysis of hydraulic conductivity measurements by lithology (Section 2.1.3.2.2). Details of the mine footprints and flow rates (i.e. the assumed pumping rates to dewater mines) used to represent the hydrological changes due to mining are provided in Section 2.1.6.3.