The groundwater model’s boundary conditions are specified in this section.

The model is a three-dimensional model with vertical sides. Its base is defined by the P900 horizon in the geological model of the Hunter subregion (see Section 2.1.2 of companion product 2.1-2.2 for the Hunter subregion (Herron et al., 2018)) (Bioregional Assessment Programme, Dataset 1). Its top is defined by the land topography (Geoscience Australia, Dataset 2) and the bathymetry of the ocean floor (Geoscience Australia, Dataset 3), which have been combined into the Hunter subregion topographic surface for groundwater modelling (Bioregional Assessment Programme, Dataset 4).

The model’s outer boundary was chosen to coincide with the outer boundary of the subregion on its north-eastern side. Here the subregion boundary is defined by the northern extent of the geological Sydney Basin and a small part of the much smaller Werrie Basin around Murrurundi. Lying along the Hunter-Mooki Thrust Fault, and being the boundary of the Sydney Basin, this portion of the model’s lateral boundary is assumed to be a no-flow boundary – that is, not hydrologically connected to the Hunter subregion (shown in Figure 12 by the pink line).

The groundwater modelling domain was extended approximately 100 km from the coastline into the ocean to approximately align with the edge of the Sydney Basin, and approximately 40 km west and south-west of the surface water catchment boundaries which separate the Hunter subregion from the Northern Inland Catchments and Sydney Basin bioregions (see Figure 4 in companion product 1.1 for the Hunter subregion (McVicar et al., 2015)). These extensions were chosen to minimise boundary effects at the ocean–land interface and along the west and south-west boundaries where there are no geological constraints on the groundwater systems, which would restrict the movement of water across this boundary. The areas of extension are evident in Figure 12. 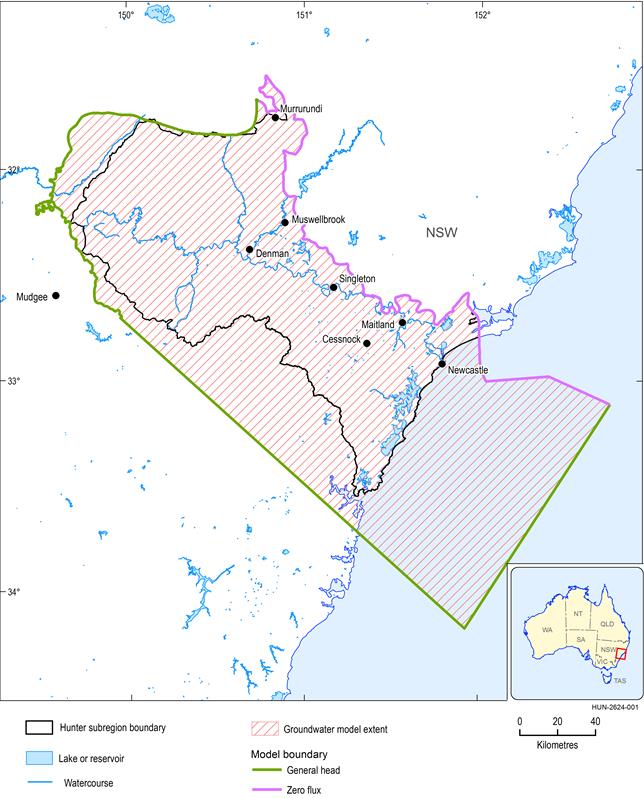 The boundary conditions placed on the model’s outer boundaries are:

A general-head boundary condition means that fluxes across the boundary are dynamic. The flux (measured in ML/year/m2) at a point (x,y,z) at time (t) is a function of conductance C and the hydraulic gradient, corresponding to the difference in groundwater level h(x,y,z,t) and a reference groundwater level h0(x,y,z):