In the Hunter subregion, the groundwater model has been developed in the Multiphysics Object-Oriented Simulation Environment (MOOSE) (Section 2.6.2.3). To be fit for the purposes of a bioregional assessment (BA), the groundwater model needs to satisfy the criteria listed in Table 3. The remainder of this section discusses each of these criteria having regard to the numerical modelling approach undertaken in the Hunter subregion. 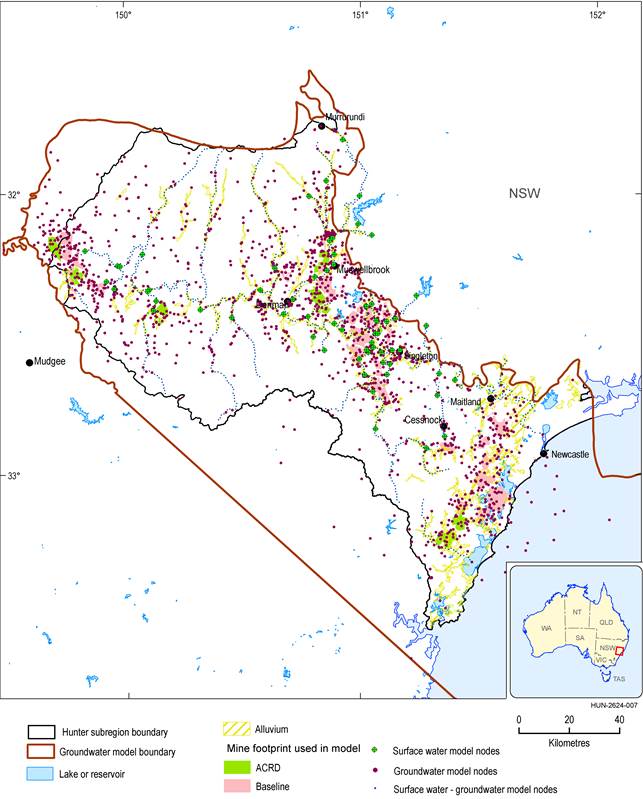 The maximum extent of the coal resource developments in CRDP is equal to the union of extents for baseline and ACRD.

Pumping water that flows from the coal seam, interburden and weathered rock into the working area during mining produces a cone of drawdown and a drop in the watertable around the worked area. Where drawdowns expand into alluvial aquifers that intersect the river channel, the flux of water from the alluvial aquifer to the river will tend to decrease. To represent this surface water – groundwater interaction, the groundwater model must either represent alluvial aquifers and the river network in its model structure or interface with an alluvial groundwater model that does. A surface water model constructed to represent the same river network can receive these changes in baseflow at specified points along its network to represent the combined effect of changes to surface runoff and groundwater input on streamflow. Since groundwater and surface water systems operate at different temporal scales, the models used to represent these processes run on different time steps. Streamflow is very responsive to individual rainfall events and is usually modelled at a daily time step or finer. Groundwater levels in shallow, unconsolidated alluvium are also responsive to changes in rainfall and river stage, but also to exchanges with deeper, intermediate and regional-scale groundwater aquifers in more consolidated material (i.e. lower transmissivities), which respond relatively slowly to changes in rainfall recharge. To predict these intermediate and regional-scale groundwater systems, a monthly or more infrequent time step can suffice.

While fully coupled surface water – groundwater model codes are available (e.g. HydroGeoSphere, Brunner and Simmons, 2012), their use is not feasible within BAs due to their high data requirements for parameterisation and operational constraints. The latter relates mainly to the general numerical instability of such models and long runtimes which would severely limit a probabilistic uncertainty analysis that requires the models to be evaluated hundreds of times with vastly different parameter sets.

For the Hunter subregion, the modelling suite includes the Australian Water Resource Assessment landscape (AWRA-L) water balance model (Viney et al., 2015) to calculate the surface runoff to streams; the MOOSE groundwater model to predict watertables and change in baseflows (detailed in this product); and the AWRA-R (river) model (Dutta et al., 2015) via which surface runoff and change in baseflow are propagated downstream. The individual models have different spatial and temporal resolution which requires a set of customised processing steps to upscale or downscale model data to allow the models to be linked.

Figure 4 illustrates the model sequencing, parameters exchanged between models and the outputs generated at model nodes to inform the receptor impact modelling. The MOOSE, AWRA-L and AWRA-R baseline runs predict the hydrological changes of coal mines that were commercially producing coal as at December 2012. The corresponding CRDP runs predict the combined hydrological changes of the baseline coal resource development (baseline) and those expected to begin commercial production after 2012 (see Section 2.3.4 of companion product 2.3 for the Hunter subregion (Dawes et al., 2018)).

The difference in predicted drawdown between baseline and CRDP runs, expressed in terms of dmax and tmax, yields the predicted hydrological changes due to the additional coal resource development in the Hunter subregion. In the receptor impact analysis, the ecological consequences of the predicted changes in HRVs in the fractured rock aquifers and alluvial aquifers are assessed. 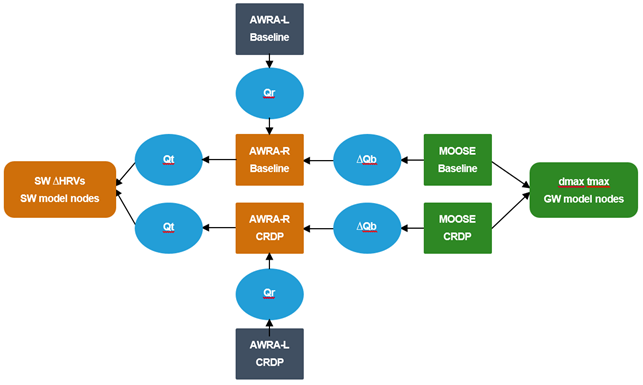 Further technical detail of the conceptualisation, parameterisation and implementation are provided in Section 2.6.2.3 for the MOOSE groundwater model and in companion product 2.6.1 for the Hunter subregion (Zhang et al., 2018) for the AWRA-L and AWRA-R models. 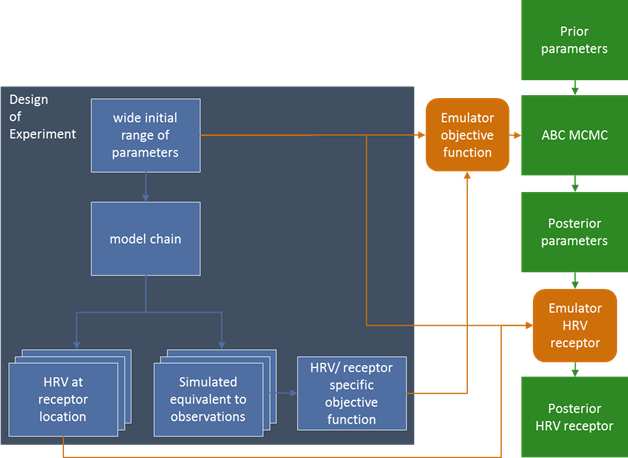 The first step is to identify the parameters of the model chain to include in the uncertainty analysis and to define a wide range that represents the plausible range of the parameters. A large number of model chain evaluations are carried out, sampling extensively from this parameter range. For each evaluation the corresponding predicted changes in hydrological response variables at the model nodes are stored, together with the predicted equivalents to the observations. The latter are summarised into objective functions, tailored to each hydrological response variable.

This information forms the basis for the subsequent uncertainty analysis. In the uncertainty analysis, the prior parameter distributions – the most likely range of the parameter values based on data and expert knowledge – are constrained with the available relevant data using the Approximate Bayesian Computation methodology. This results in a posterior parameter distribution, tailored to a specific hydrological response variable, which subsequently can be sampled to generate a probability distribution at each model node.

To incorporate the model chain into the uncertainty analysis it needs to be scripted so the parameter values can be changed in an automated fashion, be evaluated from a command line on high performance computers and, most importantly, be numerically stable so that the model converges for a wide range of parameter values.

The three models in the model chain for the Hunter subregion have text files as input files and can be executed from the command line. The robustness of each model is tested through a stress test in which a selection of extreme parameter combinations is evaluated. While this does not guarantee that all model evaluations will converge, it provides confidence that the majority of parameter combinations will.

The main aim of a BA is to provide a regional-scale assessment of the potential hydrological changes and impacts that accumulate over time and space from multiple coal resource developments. Results from this assessment identify areas within the Hunter subregion that are potentially at risk from additional coal resource development. While some model parameters are locally constrained by observation data, the range of most parameters are informed by regional data.

The stochastic, prediction focussed approach permits the use of local scale information, such as contained in environmental assessments for the individual mines or from other local studies, to constrain the regional parameterisation, without the need to run the computationally intensive regional scale groundwater model again. In section 2.6.2.8.1.4, this concept is illustrated for the Wyong area.

A secondary objective of the numerical models is to inform the water balance reporting in companion product 2.5 for the Hunter subregion (Herron et al., 2018). The groundwater model and AWRA models produce estimates of the water balances under baseline and CRDP.

An overarching requirement of the BAs is for all model outputs to be transparent and reproducible.

Input data, model files (including the pre- and post-processing scripts and executables), and results are available at www.bioregionalassessments.gov.au.

As the evaluation of the model chain is a highly automated and scripted process, it is possible to reproduce the results reported in this product using the scripts and executables, provided the computational resources are available.