All major rivers (31 named reaches) within the Hunter subregion (Geoscience Australia, Dataset 8) are represented in the model. Some additional small reaches were added to ensure that change in baseflows could be generated along rivers represented in the AWRA-R (river) node-link network. The polylines used to define the locations of rivers in the groundwater model are shown in Figure 16. 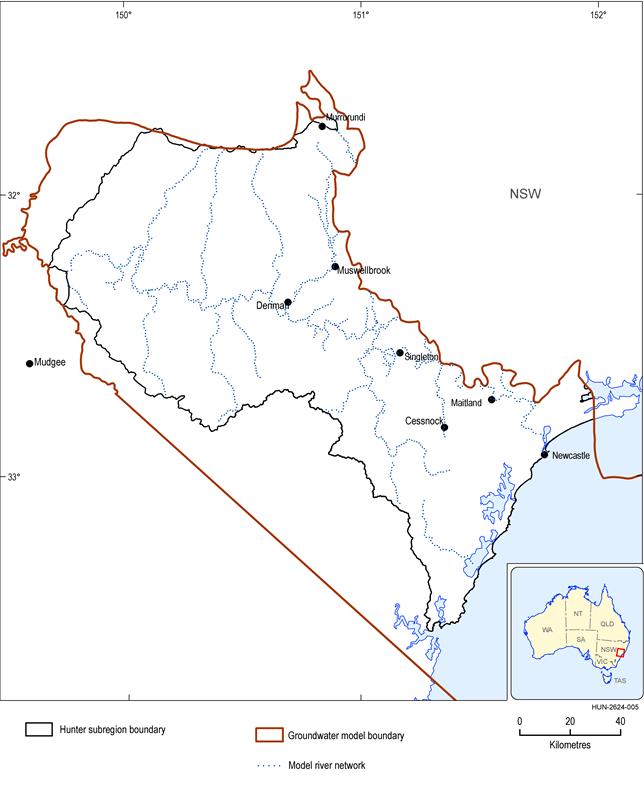 These points are placed at a depth of 5 m below the model’s topography. This is for two reasons. Firstly, rivers tend to incise channels below the land surface at a scale that may be too fine to be represented in the 3-second digital elevation model (Geoscience Australia, Dataset 2) used to define the surface topography. At some points on the river network, surveyed information has been recorded that could be used instead, but this is not available for most of the river network. Secondly, the model further discretises this digital elevation model with resolution as coarse as 15 km, so many points at their true elevation according to the digital elevation model would lie outside the model domain (above the model topography). For these two reasons it is appropriate to shift the points’ vertical position downwards. This shift is varied in the uncertainty analysis.

At each point, representing a 1 km section of river, along the river network, the model can lose water to represent fluxes to the river (i.e. baseflow) or gain water, representing leakage from the river, according to:

The base value of C is motivated by assuming the riverbed has a width of order 10 m and thickness of order 1 m and conductivity of 0.1 m/day. The river stage height defaults to h0 = 3 m, for all points. However, because the depth of the points is varied in the uncertainty analysis, this effectively also varies h0.

The surface water model contains 63 nodes at which the groundwater model can provide change in baseflow estimates. Nodes mostly correspond to streamflow gauging stations, but some nodes have been included specifically for assessing hydrological changes in response to coal resource development under the baseline and coal resource development pathway (CRDP). The baseflows (positive) and leakages (negative) are summed for all the points in the link upstream of a node in order to predict the total baseflow at the node. The numerical implementation of the groundwater model runs using nominal monthly time steps, so can only provide a monthly time series of gauge baseflows. The surface water model runs using daily time steps, and the groundwater results are interpolated linearly to provide this.