With a total catchment area of 34,415 km2, the Neales-Peake catchment is an ephemeral, unregulated river system, consisting of the Neales and Peake Rivers and associated tributaries. The headwaters of the catchment develop on the stony tablelands forming the western rim of the Lake Eyre Basin, at an elevation of 300 to 370 m, with the main drainage channel running 430 km before terminating at Kati Thanda – Lake Eyre North at approximately sea level (Costelloe et al., 2005a).

Rainfall and potential evapotranspiration in the Neales-Peake catchment are consistent with those observed in the wider Arckaringa subregion, with a mean annual precipitation depth of 150 mm and mean annual point potential evapotranspiration of 2,510 mm. Although the majority of rainfall occurs in the summer months, significant winter rains are not uncommon (Costelloe et al., 2005a). The variability of rainfall over the catchment is both spatially and temporally among the highest in Australia (Allan, 1985). Key rainfall events in the Neales–Peake range from convective thunderstorms with limited spatial extent, but often with high intensities, to large transient depressions of tropical origin (Allan, 1985; Croke et al., 1999) that result in catchment-wide flooding.

Characterised by complex, multiple anastomosing channels, shallow channel definition, wide floodplains and waterholes, the intermittent watercourses of the Neales-Peake system typically flow in response to the more localised thunderstorm-derived rainfall. Such events can be important in maintaining aquatic refugia, but result in limited connectivity between waterholes. The volume of the waterholes is often quite small, with most waterholes ranging between 5 and 90 ML, though they can be as large as 280 ML (Costelloe et al., 2008). The small size of most waterholes means that small runoff events in the main channel system are capable of filling waterholes to their maximum cease-to-flow level. The larger rainfall events result in runoff through much of the channel system, recharging the alluvial and floodplain groundwater stores and allowing widespread migration of aquatic fauna.

In-channel flow events in the Neales-Peake catchment are observed by pastoralists once or twice a year, with larger floodplain inundating events occurring more infrequently (Costelloe et al., 2005b). In-channel waterholes are developed on the Neales River and Peake Creek and range from shallow (<1 m), predominantly salty, ephemeral waterholes containing water for some months following a flow event, to rare deeper waterholes (2 to 4.5 m) that are near permanent and form important refugia for the biota in this ephemeral, unpredictable system. The observed salinity of these waterholes varies significantly, both spatially and temporally, within the reach (Costelloe et al., 2008).

Understanding the ecohydrology of ephemeral to intermittent arid zone river systems is greatly hindered by the paucity of hydrological data describing both individual flow events and the long term flow regime in the river (Costelloe et al., 2005a). The need for hydrological and biological data on dryland rivers is increasing as the demand for the water resources of these rivers increases (Walker et al., 1995; Sheldon et al., 2000). In responding to this need, several dedicated data-gathering projects have been undertaken in the Neales-Peake catchment in recent times (Costelloe et al., 2008; Costelloe, 2011a). This has resulted in a 10 year inventory cataloguing data relevant to the persistence of waterholes in the catchment, including water quality (Costelloe, 2011a), though there is still a pronounced knowledge gap in terms of volumetric data. In spite of the short time scale, missing and unreliable stage data and lack of flow data, the data collected on the Neales-Peake catchment represent the most comprehensive dataset of all western Lake Eyre Basin river systems.

Over the period 2000 to 2010, 30 flow events were recorded in the Neales-Peake catchment, of which approximately half (16) were local flows, resulting in limited or no longitudinal connectivity and little floodplain inundation. These flows were typically caused by localised thunderstorms that did not produce enough rainfall to overcome the high transmission losses owing to poorly channelised reaches between waterholes and have demonstrable significance for local biota (Bunn and McMahon, 2004). On eight occasions, flow events were large enough to be classed as ’subcatchment flows’, meaning that flows had considerable downstream extent and longitudinal connectivity, although they were unlikely to utilise all available floodplain or deliver inflow to Kati Thanda – Lake Eyre North (Costelloe, 2011a). The remaining six flows (February 2000, June 2001, February 2003, probably October 2005 and December 2008, and December 2009) were whole catchment floods, large enough to use most of the floodplain, connect all major rivers and tributaries, and likely flow into Kati Thanda – Lake Eyre North. Additionally, some flood data are available for the period 2010 to 2012 and indicate that a major flood, estimated as a 1:10 year event (Costelloe, 2011a), occurred in February 2011 in response to rainfall from a rain depression associated with Cyclone Yasi. At the time of writing, no subcatchment sized flows or greater have been observed in the Neales-Peake catchment since around February 2012, meaning that all but the largest waterholes are dry (JF Costelloe, pers. comm., 2013).

There are 20 waterholes in the Neales-Peake catchment that have been identified as significant ecological refugia, and have been surveyed in previous work (Costelloe et al., 2004; 2005a; 2011a). This collection provides possibly the most complete catchment scale inventory of riverine refugia in any arid zone catchment of Australia (Costelloe et al., 2011a). The waterholes are indicated in Figure 30 and physical characteristics summarised in Table 9.

The maximum depth of a waterhole when flow ceases (cease-to-flow depth; cease-to-flow depth (CTFD) has been found to be an important measure of how long water will persist in the waterhole (Costelloe et al., 2007), with persistence being of great significance to local biota. From Table 9, it can be seen that the CTFD of the key waterholes in the Neales-Peake catchment tends to vary over time. This is likely a normal part of the long term flood cycle, where high flows associated with large floods will scour some of the bed sediments of the waterholes, increasing CTFD, and smaller flow events will deposit suspended sediments leading to increasing sedimentation of the waterholes and a decrease in CTFD. The precise mechanics of these processes in this region are not fully understood at this time; however, ongoing monitoring and modelling projects will continue to deliver a greater insight into the long term flood cycle.

The persistence of a waterhole between flow events has been identified as the major differentiating feature of ecological refugia. Reliable measurements of CTFD in conjunction with vegetation surveys have enabled robust estimation of potential evapotranspiration (PET), crucial to calculating persistence. Work by Russell (2009) has demonstrated that losses from some waterholes in the catchment (South Stewart, Cramps Camp) are in excess of calculated evapotranspiration (ET). This suggests that some water is lost to the unconfined aquifer, reducing the persistence of the waterhole between flow events. The same research showed that Algebuckina Waterhole largely loses water at the ET rate, further enhancing its importance as the most significant refugia in the region (McNeil et al., 2011a). The high rates of ET, means that even non-leaky waterholes, like Algebuckina Waterhole, will lose more than 2 m of water per year. Given the CTFDs in Table 9, this means that all waterholes are likely to be dry after two years of no flow. The variability in loss rates across the region further emphasises the need for improved and ongoing monitoring and research in the area. 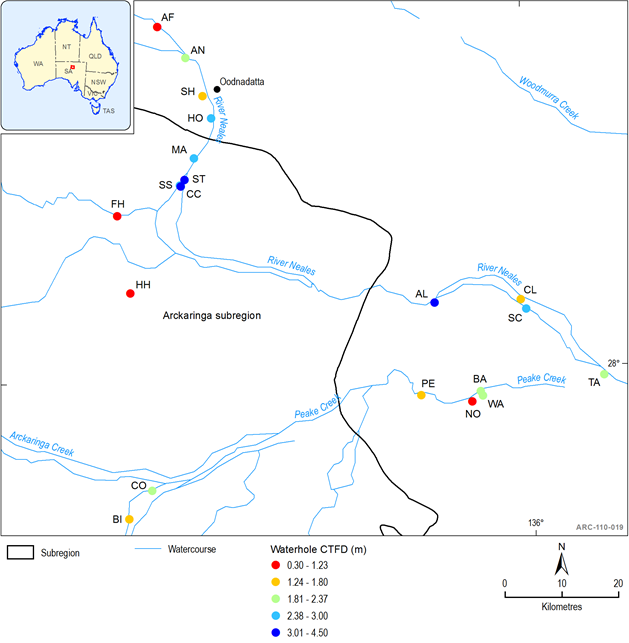 Refer to Table 9 for Waterhole Names

Note: Surveys following the floods of February 2011 have indicated that the CTFD of Algebuckina Waterhole may increase up to 4.8m (Costelloe, 2011b).

In addition to waterholes, the Neales-Peake catchment contains numerous Great Artesian Basin springs that are hydraulically connected to the river system (see Figure 31). The hydraulic connection can be due to springs occurring on the floodplain of the river (i.e. North Freeling group) or experiencing periodic connection from tributary flow (e.g. Hawker spring group). This connectivity is further discussed in Section 1.1.6.1 . 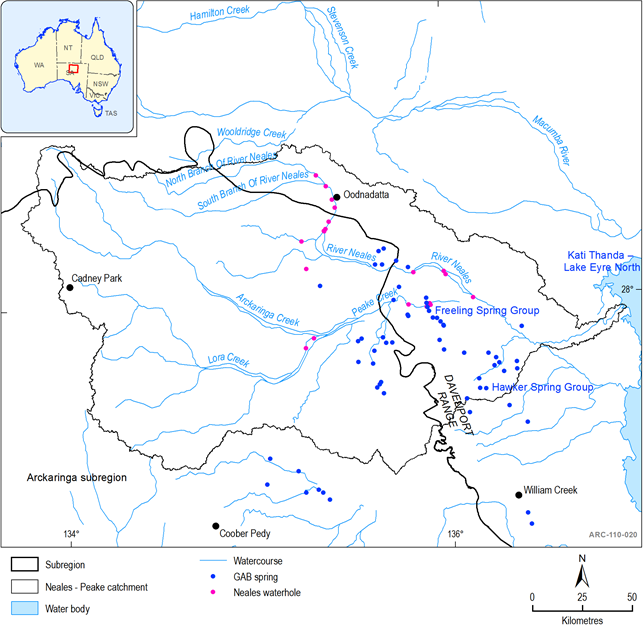 Figure 31 Springs and waterholes of the Neales-Peake catchment

As previously mentioned, very little is known of the hydrology of the Warriner Creek and Margaret Creek subcatchments. They experience similar rainfall and PET totals to the Arckaringa subregion and it is likely that they share similar flow regimes to the Neales-Peake catchment, particularly in terms of frequency of flow events (JF Costelloe, pers. comm., 2013). The highly variable nature of rainfall and flow events over the Arckaringa subregion and Lake Eyre bioregion generally is exemplified by the observations of Hunter (1984, as referenced in Kotwicki, 1986) who describes flood events of such magnitude in the Warriner-Margaret Creeks subcatchments that Kati Thanda – Lake Eyre South filled and spilled over to Kati Thanda – Lake Eyre North. This is the only time such an event has been recorded and is likely the result of a very specific weather pattern whereby a very large rain depression was situated over the south-western part of the Kati Thanda – Lake Eyre Basin, with no rainfall observed in the north-east. No surface water fed waterholes have been identified in these subcatchments. Examination of topographic maps of the area indicates that both creeks contain Great Artesian Basin springs within their floodplains, which, given the lack of waterholes, are likely very important refugia for biota in the area.