Underlying the Arckaringa Basin are sedimentary rocks of the Warburton and Officer basins and crystalline basement sequences, including the Adelaide Geosyncline, Stuart Shelf, Gawler Craton and Musgrave Block.

A number of other localised fractured rock and karstic aquifers occur within crystalline, largely Precambrian, but also some early Cambrian, basement rocks in the vicinity of the Arckaringa Basin and can be discussed as a number of geological provinces. These provinces include the Adelaide Geosyncline and the Stuart Shelf, which underlie the eastern and south-eastern portions of the Arckaringa Basin. These rocks are lateral equivalents and are referred to as Adelaidean (Preiss, 1987). They represent largely marine deposition within a pelagic and continental shelf environment respectively and include limestone, sandstone, shale, quartzite, dolomite, tillite, conglomerate and volcanics. These units outcrop within the Peake and Denison Inlier, in the vicinity of the Mount Woods Inlier and to the south and south-east of Cooper Pedy. The southern region of the Arckaringa Basin is underlain by rocks associated with the Gawler Craton. The Gawler Craton is a region of cratonised complex igneous, sedimentary and metamorphic rocks that displays a number sedimentation, intrusion and orogeny phases that cover a time period from the Archean to the Mesoproterozoic (Drexel et al. 1993). Finally, the north-western margin of the Arckaringa Basin is in the vicinity of the Musgrave Block, which is an east-west trending belt of Proterozoic granulite and gneiss (Drexel et al. 1993).

Sedimentary rocks of the Warburton Basin are primarily Cambrian to Ordovician, although Devonian strata (Mintabie beds) occur near the northern margin of the subregion (Gravestock et al., 1995). Gravestock et al. (1995) presented evidence for five separate depositional sequences in the Warburton Basin, although the depositional record has not been completely preserved. Simplistically, these sequences include a basal suite of shallow marine sedimentary rocks, followed by a marine prograding sequence through to deep marine organic-rich lime mud and shale. A marine regression sequence then follows into a shallow marine sequence. Additionally, there are also minor volcanolithic units (Gravestock, 1995; Radke, 2009). A paucity of exploration has meant that only a few formations have been named to date (Radke, 2009).

DMITRE (2013) state that the thickness of the Warburton Basin is in excess of 1800 m. Sedimentary rock of the Warburton basin are described by Stewart (2010) as unconformably overlying mafic volcanic rocks of the early Cambrian.

Gravestock et al. (1995) suggested the Officer Basin primarily has five depositional sequences, three of which are Cambrian (collectively known as the Marla Group), a fourth is Ordovician-Silurian (known as the Munda Group) and a later stage Devonian sedimentary sequence are separated from the others by an unconformity. The first sequence is largely composed of the inter-fingering Relief Sandstone and Oulburra Formation, the latter unit representing transgressive marine sedimentation. The second sequence primarily comprises alluvial, fluvial, playa lake red-bed, alluvial fan and some marine sedimentary rocks of the Observatory Hill Formation, Arcoeillinna Formation, Apamurra Formation and lateral equivalents. The third stage of deposition is composed of fluviodeltaic and volcanolithic sequences of the Trainor Hill Sandstone, Table Hill Volcanics and lateral equivalents. Finally, Ordovician-Silurian sequences include the Mount Chandler Sandstone, Indulkana Shale and Blue Hills Sandstone and are predominantly interpreted to represent deposition within a shoreline or shallow marine environment.

In addition to the stratigraphic description of the Officer Basin provided by Gravestock et al. (1995), Precambrian sequences of the Callanna, Lake Maurice and Ungoolya Groups that have age equivalents within the Adelaide Geosyncline are included in discussions concerning the Officer Basin. In a particular reference to groundwater, the Murnaroo Sandstone is discussed by AGT (2012) and Alexander and Dodds (1997). 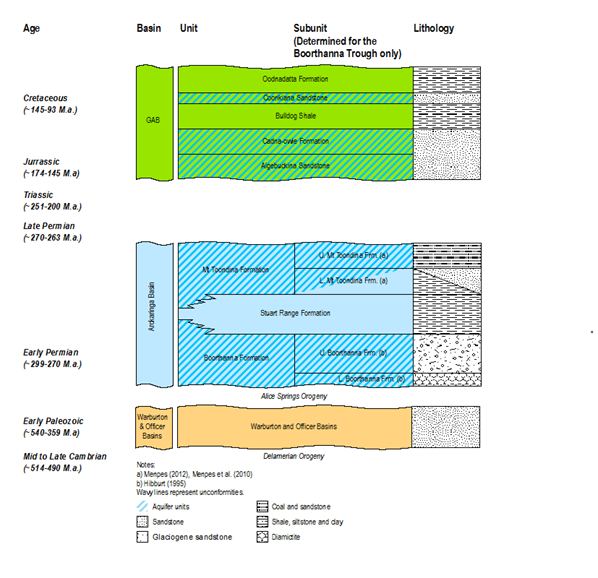 The Boorthanna Formation consists of two units: the upper unit consists of interbedded marine clastic rock, with grain sizes ranging from silt to boulders, whereas the lower unit consists of glaciogene sandy to bouldery claystone diamictite, intercalated with shale and carbonate layers. Occurrences of the lower unit are restricted to deeper parts of the basin, including the Wallira, West, Penrhyn and Phillipson troughs and the southern Boorthanna Trough. In contrast the upper unit is more widespread, particularly within the eastern half of the Arckaringa Basin. Boorthanna Formation rocks are described by Kellett et al. (1999) as weakly indurated, with localised calcareous, ferruginous and pyrite cementation. Alluvial and colluvial sediments consisting of coarse sand and gravel were interpreted as Permian paleovalleys cutting into Proterozoic basement in the vicinity of the Mount Woods Inlier (Belperio, 2005).

The contact between the Stuart Range Formation and the underlying Boorthanna Formation is described as typically conformable and occasionally disconformable. Variations to this are notable in the Boorthanna Trough where the contact between the two formations is unconformable, while near the south–western boundary of the basin, the two formations are inter-fingered (Hibburt, 1995). However, Menpes (2012) and Menpes et al. (2012) have identified a sequence boundary that cuts down into the Boorthanna Formation in the Boorthanna Trough, but appears to have been an exposure surface with marine sediments overlying marine sediments and minimal loss of section in the Phillipson Trough. The maximum thickness of the Stuart Range Formation estimated from geophysics and logging data analysis presented in this report is approximately 430 m and is reported to occur near the northern edge of the Arckaringa Basin. The average thickness is calculated to be approximately 13 m.

Directly overlying most of the Arckaringa Basin is the Eromanga Basin, which is synonymous with the sedimentological extent of the Great Artesian Basin (GAB) hydrogeological basin throughout the Arckaringa subregion. The GAB has been referred to as both a geological basin and hydrogeological basin; geologically, the GAB describes a terrestrial to marine Cretaceous–Jurassic super basin that covers much of eastern and central Australia (Keppel et al., 2013). Variations in either basin subsidence or up-warp and global sea level changes during the Mesozoic led to the development of a series of transgressional alluvial, fluvial and marine sequences (Krieg et al., 1995; Ollier, 1995; Toupin et al., 1997). Consequently, a number of stratigraphic units relating to various aquifers and confining layers exist within the Arckaringa subregion; a summary of the major units are provided in Table 4.

The most recent phases of sedimentation are predominantly composed of braided fluvial and lacustrine sediments. Cenozoic sedimentation may be divided into two depositional episodes; sedimentation that occurred during the Paleogene and Neogene prior to upwarping at 15 to 5 Ma and those associated with the current hydrological system; both phases may provide discrete aquifers. Two sedimentary basins of Paleogene and Neogene age occur in the vicinity of the Arckaringa subregion, namely the Billa Kalina Basin (Drexel and Preiss, 1995) and the Lake Eyre (geological) Basin.

The Billa Kalina Basin is a small terrestrial basin composed of fluvial and lacustrine-derived sandstone, clay and dolomite that partly overlies the south-eastern Arckaringa Basin (Callen and Cowley, 1995).

Sediments associated with the Lake Eyre (geological) Basin largely occur to the east of the Arckaringa subregion. These were primarily deposited in three phases of braided fluvial and lacustrine sedimentation.