In general, fresher groundwater occurs near the south-eastern and eastern margins of the basin, near the Gawler Ranges, southern Stuart Range and Peake and Denison Inlier, whereas higher salinities are found east of the Mount Woods Inlier and Stuart Range and south of the Mount Woods Inlier near the Phillipson Trough (Figure 25). Salinities generally range between 6000 and 25,000 mg/L although higher salinities (>100,000 mg/L) do occur near the southern margin of the subregion. pH ranges between 6.3 and 9.7. From very limited data, groundwater temperature varies between 25 °C (non-artesian wells located within the far south-west corner of the Arckaringa Basin) and 26.5 °C (artesian well located in the vicinity of the Wintinna Coalfield) (Wohling et al., 2013), although this is not thought to be representative of the true range. With respect to gross hydrochemistry, major ion hydrochemistry from Arckaringa Basin aquifers in the south and south-east of the basin is similar to that found within the overlying GAB, being predominantly Cl and Na + K dominant, with relatively high Mg and SO4 (e.g. AGC, 1975; Howe et al., 2008).

With respect to groundwater quality from the Cenozoic aquifers, little information from the immediate vicinity of the Arckaringa subregion is known. From a wider area inclusive of the Arckaringa subregion, salinities ranging between 100 mg/L to 150,000 mg/L have been reported (C. Bleys and Associates, 1977; Shepherd, 1978; Howles, 2000; AGT, 2012).

There are in excess of 1,100 records for salinity data for wells completed in GAB sediments in the vicinity of the Arckaringa subregion stored within SA_Geodata database. The vast majority of these values reported for the JK aquifer. Water quality can vary greatly, with salinities ranging from approximately 150 to >72,000 mg/L. That being said, the majority of salinities reported are <5000 mg/L. Notable areas where salinity concentrations for GAB groundwater is in excess of

5000 mg/L include a broad area in the vicinity of the southern troughs in the Arckaringa subregion, west of the Mount Woods Inlier and near Lake Phillipson, within parts of the south-east Arckaringa Basin, near the eastern margin of the Arckaringa near the GAB springs, and in isolated parts of the upper reaches of the Neales River catchment area. With respect to general chemical composition, Jack (1923), Habermehl (1980) and Radke et al. (2000) describe groundwater originating from the western margin of the GAB to be characterised as Na-Cl-SO4 type water, whereas that flowing from the east to be Na-HCO3-Cl type water, with the two converging in the vicinity of the springs west of Kati Thanda – Lake Eyre. More recently, Crossey et al. (2013), through a more detailed analysis, was able to subdivide GAB groundwater into a number of groupings that describe different recharge sources and flow paths, including near the Birdsville Track Ridge, two areas east and west of the Peake and Denison Inlier respectively, between Marla and Kati Thanda – Lake Eyre South and the south-western GAB. Additionally, pH values for GAB groundwater typically range between 7.5 and 8.5.

Little is known about the quality of groundwater from the Officer Basin, given the sparse usage of water and more readily available sources in shallower aquifers. That being said, AGT (2012) report that groundwater with salinities <30,000 mg/L from aquifers at >150 metres below ground level (mBGL) are typical of the Officer Basin, although groundwater from the southern part of the basin may contain salinities in excess of 35,000 mg/L. Additionally, Alexander and Dodds, (1997) describe groundwater from the Officer Basin as being highly saline, while Aldam (1994) report salinities from Officer Basin aquifers as ranging in salinity from 1100 to 150,000 mg/L, with the poorest quality water obtained from the vicinity of Lake Wyola, an area of known evaporitic discharge. Aldam (1994) also stated that the better quality water was obtained from areas thought to be subject to either enhanced recharge or a reduction of evaporitic discharge due to lithology or fracturing.

Most information concerning the groundwater quality from Precambrian fractured rock aquifers in the vicinity of the Arckaringa subregion comes from the south-eastern portion where most groundwater studies have occurred. Near the Mt Woods Inlier, groundwater extracted for mining has salinities between 5000 and 10,000 mg/L (Belperio 2005). In contrast, Kellett et al. (1999) describe groundwater from crystalline basement fractured rock aquifers near salt lakes as being unusable for stock watering, with salinities exceeding 100,000 mg/L. 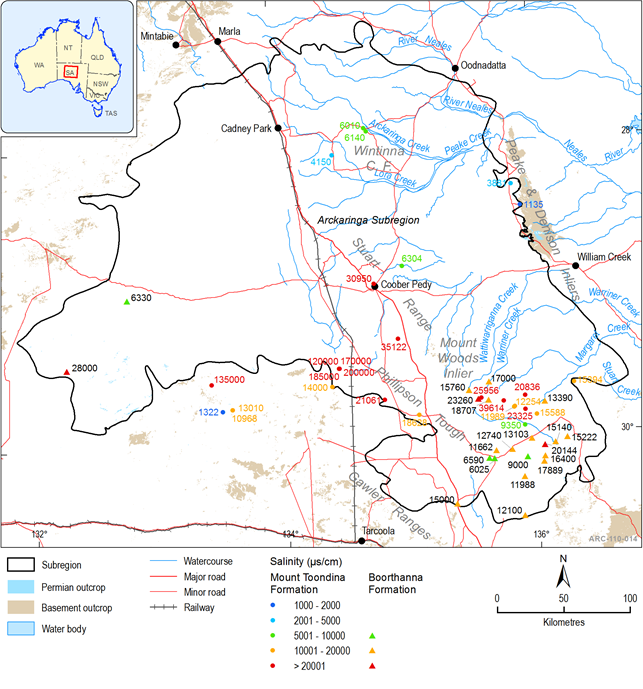