In recent times, several dedicated data-gathering projects in the Neales-Peake catchment have delivered a 13 year inventory cataloguing data relevant to the persistence of waterholes in the catchment, including water quality, though there is still a pronounced knowledge gap in terms of volumetric data. In spite of the short time scale, missing and unreliable stage data, and lack of flow data, the data collected on the Neales-Peake catchment represent the most comprehensive dataset of all western Lake Eyre Basin river systems.

The waterholes of the Neales-Peake catchment can be divided into those that are saline and flushed only during flow events and those that are mostly fresh and may slowly increase in salinity as they lose water to evaporation and transpiration of local flora in periods of no flow. Found mostly in the upper reaches of the catchment, the mostly fresh waterholes have salinities similar to those of floodwaters (100 to 200 mg/L), which increases to 500 to 1,400 mg/L in periods of little to no flow whereas the predominantly saline waterholes have salinities ranging from 20,000 mg/L at Algebuckina Waterhole to over 250,000 mg/L at Peake Crossing Waterhole. The saline waterholes are found typically in the mid and lower reaches of both rivers.

Although there are no volumetric flow data collected in the Arckaringa subregion, stage data of varying quality and length have been collected for all waterholes over the period 2000 to 2013 for the Neales-Peake catchment. There is little consistency in the data collected across waterholes and no single waterhole has continuous data for that period, however the data collected are invaluable and are currently being used to inform hydrologic modelling that is being undertaken for the region. 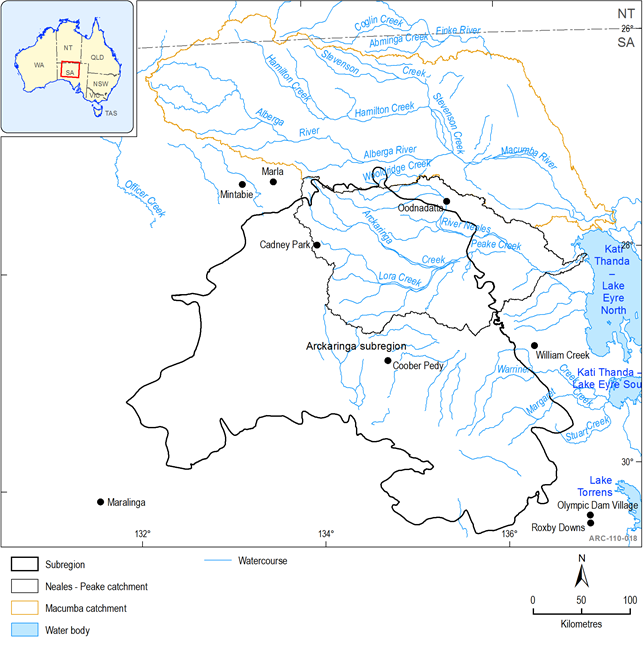