The potential for inter-basin connectivity is thought to be largely determined by the extent and characteristics of the Stuart Range Formation and paleochannels within the Mount Toondina Formation that have been filled with Mesozoic sediments. Much of the evidence for this stems from seismic data.

With respect to hydrogeological evidence, interconnectivity between the Arckaringa Basin and the overlying GAB at a regional scale is poorly understood. The limited scope and spatial extent of studies pertaining to the hydrogeology of the Arckaringa Basin has resulted in some contradictory results or interpretations, such as the hydrogeological properties of the Stuart Range Formation. For example, in the south-east of the Arckaringa Basin, Kellett et al. (1999) and Belperio (2005) described the Stuart Range Formation as a leaky aquitard that separates the GAB and Boorthanna Formation aquifers. Additionally, SKM (2009) and Aquaterra (2009) suggested that the Stuart Range Formation potentially provides sufficient leakage to enable drawdown stability in groundwater production wells in the underlying Boorthanna Formation. Conversely, SKM (2009) and Lyons et al. (2010) concluded that the Stuart Range Formation provided an effective barrier to aquifer leakage between Boorthanna Formation and unconfined GAB aquifers near the Prominent Hill Mining operation, based on hydraulic head differences and short-term aquifer-testing. Although currently not planned, longer-term aquifer stress tests or information regarding hydraulic head within the confining units between aquifers is required to improve the understanding of interconnectivity between aquifers of the GAB and Arckaringa Basin.

For the most part, the Mount Toondina Formation is interpreted to be in contact with the GAB (Figure 21). Where this is of most significance is where the GAB is in contact with sandier units within the Mount Toondina Formation and is likely to be reasonably common in marginal areas of the basin where sandier units are more abundant. This appears to be the case in the west and north-west of the Arckaringa subregion, where discriminating between sandstone from either the Mesozoic or Paleozoic eras has proven difficult when logging drill cuttings. In addition, the presence of paleochannels within the unconformity between the Eromanga Basin and Arckaringa Basin, particularly the north and north-west of the basin, are zones where potential exists for both cross-formational flow and recharge to the Permian aquifers section (Figure 16 and Figure 21). The extent of such paleochannels is currently unknown, however understanding their extent would clarify their importance with respect to inter-aquifer connectivity between the GAB and the Mount Toondina Formation. 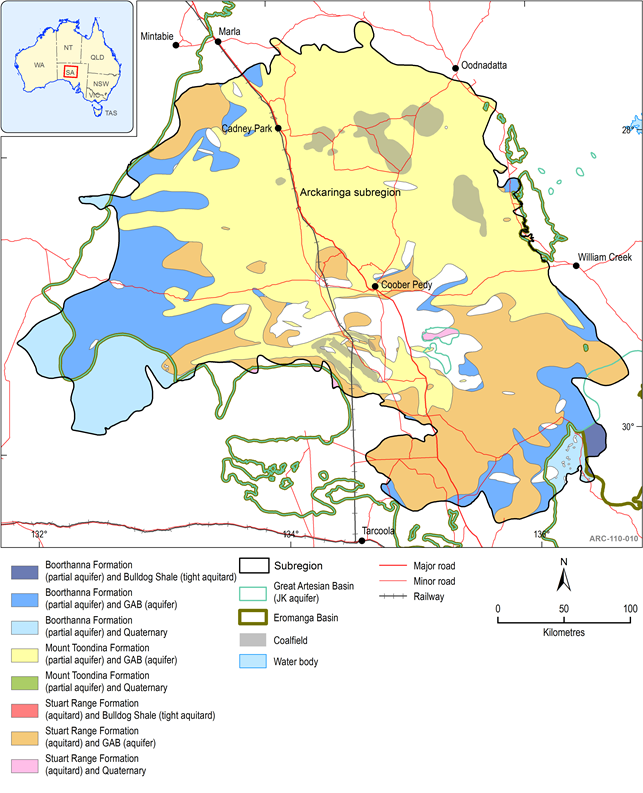 The presented interpretations in this figure are based upon the architecture and composition of the Arckaringa Basin as currently understood at the time of this report.

For deeper aquifers, such as those within the Boorthanna Formation, the removal of younger sedimentary horizons by erosion, in particular the Stuart Range Formation, prior to the deposition of the GAB or younger sedimentary units provides potential for interconnectivity between the Boorthanna Formation and overlying aquifer units. This is largely evident in the eastern and south-western margins of the basin (Figure 21).

Fault activity is also interpreted to have resulted in a variable thickness of Permo-Carboniferous formations, particularly relative to the overlying Mesozoic and Quaternary strata as well as potentially segmenting the wider Arckaringa Basin into sub-basinal areas. Evidence of seismic activity and active springs near fault zones of the eastern Arckaringa subregion suggests that faulting not only provides passive structural complexity, but may be actively contributing to changes in hydrodynamics and hydrogeological properties at both local and regional scales (Figure 17).

Existing hydraulic head data from Arckaringa Basin and Officer Basin aquifers to the west and the Stuart Shelf to the south and east, suggest that lateral connectivity is possible. Such basins may be important to recharge and discharge processes within Arckaringa subregion, although further information is required (Figure 22). 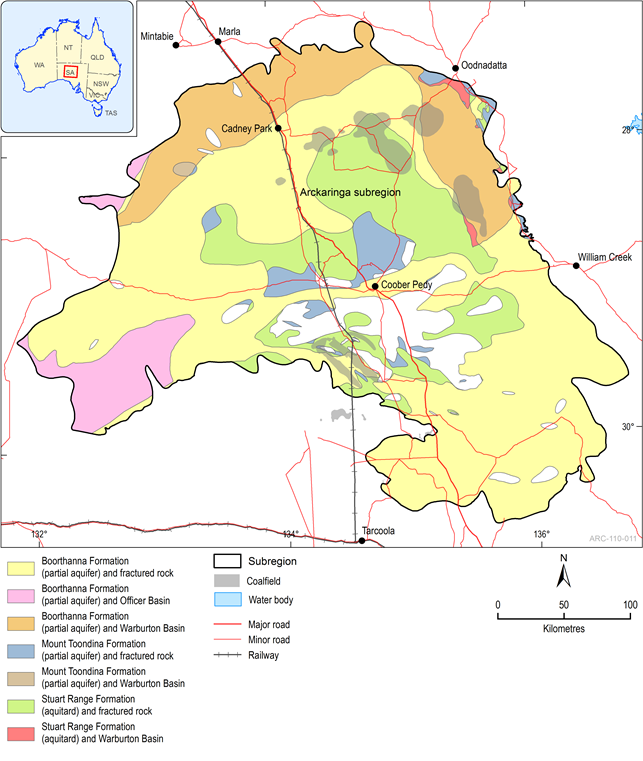 The presented interpretations in this figure are based upon the architecture and composition of the Arckaringa Basin as currently understood at the time of this report.