As discussed in Section 2.6.2.1, the primary objective of the groundwater modelling is to provide probabilistic estimates of drawdown at the regional watertable due to additional coal resource development. The regional watertable is where the majority of the ecological, economic and sociocultural assets are dependent upon water. Drawdown in the confined part of the Pilliga Sandstone is also predicted as there are economic assets dependent upon this water source.

At each model node (shown in Figure 3, Section 2.6.2.1), time series of groundwater level in the regional watertable aquifer are simulated for the baseline and the CRDP. The maximum difference in drawdown (dmax) between the modelled CRDP and baseline, due to additional coal resource development, and the year of maximum change (tmax), are calculated using the difference between the two time series. This is illustrated in Figure 21 for one model node. 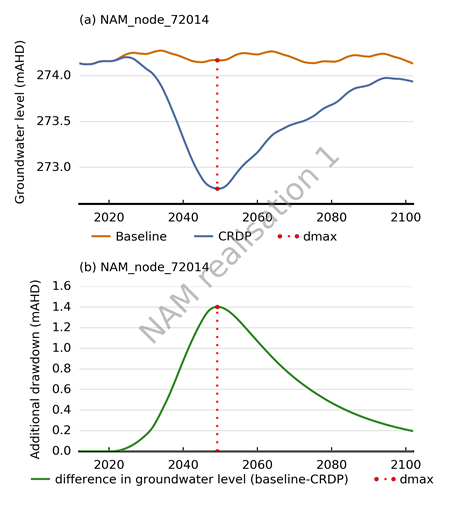 Groundwater level is relative to height above the Australian Height Datum (AHD).

Generally, the extraction of water by coal mines causes baseflow to decrease. However, the modelling indicates that longwall mining can also increase baseflow. This is due to hydraulic conductivity enhancement above underground mines and is explained in more detail in a numerical experiment reported in the groundwater modelling product for the Hunter subregion (Herron et al., 2018). The results concluded that there are three ways that baseflow can increase due to mining: 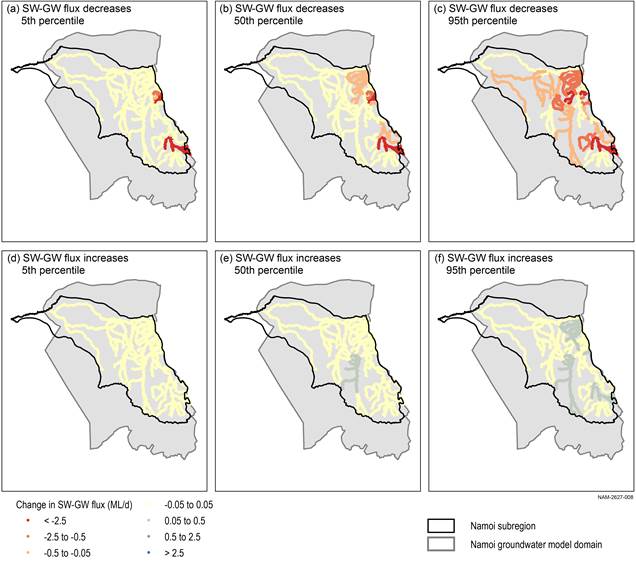 Figure 22 The 5th, 50th and 95th percentiles of the change in surface water - groundwater (SW-GW) flux predicted for each reach in the river model domain for the minimum and maximum change in a time step over the period 2013-2102