All major rivers (54 reaches) within the Namoi subregion (Geoscience Australia, Dataset 4) are represented in the model. Some additional small reaches were added to ensure that change in surface water – groundwater flux could be generated along rivers represented in the AWRA-R node-link network. The polylines used to define the locations of rivers in the groundwater model are shown in Figure 14. 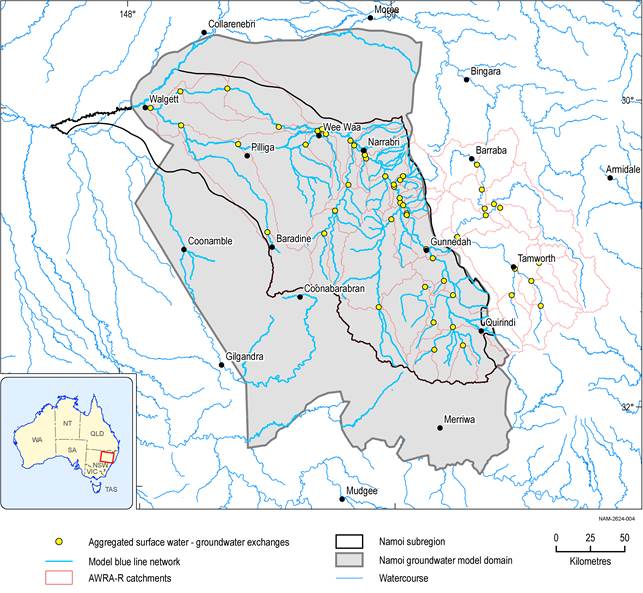 The River (RIV) package for MODFLOW-USG uses a series of model cells to represent the river boundary condition. Close to the CSG and coal mining developments the model was discretised as 300 m cells. In these regions, the river was decomposed into a sequence of points, spaced at 300 m intervals. This means surface water – groundwater flux is recorded only at 300 m intervals, rather than continuously along a river reach. The parameters necessary for the RIV package are stage height, conductance and river-bed geometry.

A steady-state river stage for the first stress period of the model was implemented based on average river stages for the historical period (1983–2012). The steady-state stages were interpolated from measurements obtained at 54 gauge sites located within the model domain (Figure 14). Transient river stages at the 54 gauges were derived from rating curves based on historical records and the flow volumes from the surface water modelling.

Another key controlling parameter is the riverbed conductance, CRIV, which is defined as follows:

where Kn and Mn represent the hydraulic conductivity and thickness of the riverbed, respectively, and Ln and Wn represent the length and width of the river reach at node n, respectively (Harbaugh, 2005). Due to a lack of data in the Namoi subregion, hydraulic conductivity of the riverbed was initially assigned values that range from 1e–6 to 1e0 m/day. Since the gaining and losing nature of a river depends largely on the relative elevation of the river stage with respect to the groundwater level in the watertable aquifer, depth of the riverbed below the land surface was identified as the most important parameter that influences the surface water – groundwater connectivity in the Namoi subregion. This was further tested in the groundwater model stress-test and is reported in Section 2.6.2.7.

It is widely accepted that riverbed hydraulic conductivity is primarily a function of reach geometry, streamflow velocity, composition and erodibility of catchment, and bed disturbance frequency (Stewardson et al., 2016). The riverbed hydraulic conductivity generally increases with riverbed slope when other factors are similar (Pérez-Paricio et al., 2010). The current study explored the conceptualisation of hydraulic conductivity variation in direct relationship with the riverbed slope. However, it was found that the surface water – groundwater interaction was mostly sensitive to the depth of the river bottom in relation to the groundwater level in the watertable aquifer.

Depth of the river bottom was considered to vary between 2 to 15 m below the model’s topography. This is for two reasons. Firstly, rivers tend to incise channels below the land surface at a scale that may be too fine to be represented in the 3-second digital elevation model (Geoscience Australia, Dataset 4) used to define the surface topography. At some points on the river network, surveyed information has been recorded that could be used instead, but this is not available for most of the river network. Secondly, the model further discretises this digital elevation model with resolution as coarse as 3 km, so many points at their true elevation according to the digital elevation model would lie outside the model domain (above the model topography). For these two reasons, it is appropriate to shift the riverbed’s vertical position downwards in relation to the land surface in the model. This shift is varied in the uncertainty analysis.