Although both these regional-scale models were made available by their owners for use in BA, neither were found to be suitable for this purpose in their current form. It was also deemed that these models would be difficult to be made suitable for BA with minor changes. Both these models are built using rectilinear finite-difference grids for MODFLOW. Thus, both these models come with the inherent limitations of the structured grids, including an inability to accommodate pinching out layers and an inflexibility to refine the grid around coal mines, CSG fields and rivers. The unstructured grid version of MODFLOW called MODFLOW-USG provides the flexibility to refine the grids and also permits pinching out of layers. Both these advantages are useful for the Namoi subregion, considering that grid refinement is required for improved accuracy of simulation around multiple mines and the CSG development and also around linear features like rivers. Formations of both the Gunnedah and Surat basins pinch out within the modelled extent and warranted the development of a new model using MODFLOW-USG. However, both the NCWS and GBRM models have informed the conceptualisation and parameterisation of the new model and their results provide a useful comparison to the BA results.

Scenario 1 in the NCWS (SWS, 2012) is akin to the BA baseline which includes current developments, and Scenario 2 is akin to the BA coal resource development pathway (CRDP) which includes both current and proposed developments. Scenario 2 considers ten approved future open-cut mines and two underground coal mines and two CSG gas fields. The coal mines for the Scenario 2 configuration include Werris Creek Mine and extension, Boggabri Coal Mine and Boggabri Coal Expansion Project, Tarrawonga Mine and Tarrawonga Coal Expansion Project, Sunnyside Mine, Rocglen Mine, Canyon, Narrabri North, Maules Creek Mine, Watermark Coal Project and Caroona Coal Project. The CSG gas fields are Narrabri Gas Project and Santos Bando. The list of developments included in the NCWS Scenario 2 is slightly different to BA, in particular the addition of CSG extraction in the Bando trough. The Werris Creek Mine is not included in the BA modelling. Figure 7a and Figure 7b show the 0.2 and 2 m drawdown contours for both scenarios from the NCWS model. The GBRM (CDM Smith, 2014) similarly has a scenario that correlates with the BA baseline that includes the Narrabri North mine (NCM), and a scenario that correlates with the BA CRDP that includes both the Narrabri North mine and the CSG development (NCM-BC). Although this model is larger than the NCWS model it only includes those developments whose groundwater extraction interacts with that of the CSG production. The 0.5 and 2 m drawdown contours for both scenarios from the GBRM are shown in Figure 7c and Figure 7d. The only areas where these two model results can be directly compared is around the CSG development in the Pilliga. The NCWS has greater drawdown than the GBRM primarily because of the higher pumping rates imposed on the model. 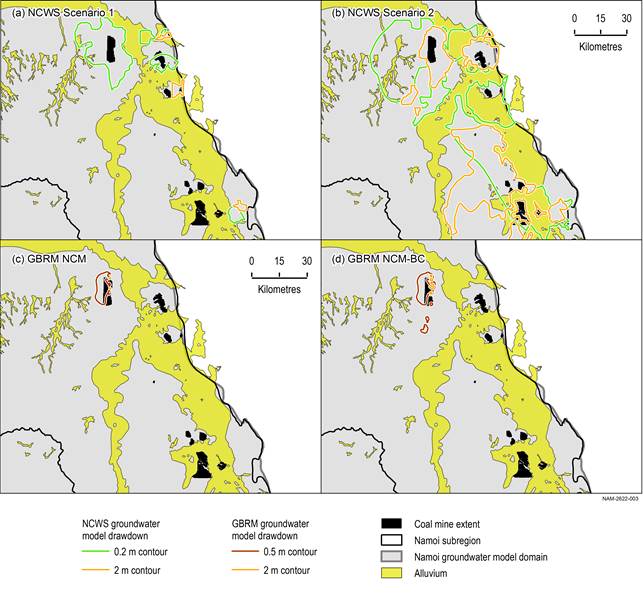 These drawdowns are for the surface and are the maximum for the period of simulation.