Mining relieves in situ stresses in the surrounding rock mass, causing deformation including fracturing. For example, in parts of the active caving zone of longwall mines, total strains can easily exceed 100%. The strain increments naturally alter the hydraulic properties of the surrounding rock, and it is generally assumed that the conductivity will increase by orders of magnitude in both the horizontal and vertical directions (Adhikary and Wilkins, 2012). This is because rock plastic deformation dilates existing micro and macro fractures and creates new ones. The rock-mass conductivity after caving and consolidation can be inferred from the response of piezometers or the measurement of water or gas flows within, above and below the goaf (Guo et al., 2014). It is always higher than the in situ value. This is the reason that the water make in a typical longwall mine will increase as panel width (and conductivity changes) increases. Therefore, in the Namoi subregion groundwater model, the hydraulic conductivity of rock units above and below each longwall mine working is assumed to be different from the in situ value.

In the Namoi subregion groundwater model, the hydraulic conductivity, K, above and below each mine working, is enhanced according to:

where K0 is the base conductivity (both horizontal and vertical components), determined by layer number, lithology and depth, as described in Section 2.6.2.3; and Δ parameterises the conductivity change. Δ = 0 before mining of the seam commences, and Δ = Δ(h) at height, h, above the seam immediately after mining commences. This conductivity enhancement is assumed to remain after mining ceases, thus a separate ‘active phase’ (with Δ large) and ‘consolidation phase’ (with Δ smaller) above longwall mines is not included in the model (such phases would be important to include if the model were trying to predict mine water makes rather than treating them as an input parameter). However, Δ may be defined differently for each polygon. Δ is calculated using the following piecewise-linear function of the height above the mining seam, h:

The general form of the relationship is illustrated in Figure 18, where it is clear that conductivity change is M orders of magnitude directly above the seam, and m orders of magnitude directly below the seam, and that the conductivity changes occur between z metres below the seam and Z metres above the seam. 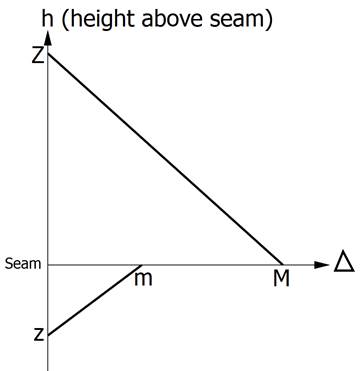 Figure 18 Assumed relationship between the conductivity-change parameter, Δ , and the height above the mining seam, h

As discussed in Adhikary and Wilkins (2012), longwall mining enhances the permeability greatly compared with bord-and-pillar mines, simply because the rock deformation caused by the latter is comparatively small. The effective conductivity in the immediate roof of longwall mines can be enhanced by up to 10 orders of magnitude (Adhikary and Wilkins, 2012; Guo et al., 2014). The values M, m, Z and z are varied in the uncertainty analysis around the values given in Table 9. The maximum increase in hydraulic conductivity has been limited to 4 orders of magnitude due to the scale of the modelling, the size of the mesh used would overstate the impacts if 10 orders of magnitude were used for this parameter.

Hydraulic enhancement is implemented in the groundwater model over the maximum footprint area of the three longwall mines (Narrabri North, Narrabri South and Caroona) starting at the stress period corresponding to the commencement of operation of the mine. The hydraulic enhancement then linearly increases. The enhancement is assumed to be permanent.