The model is a three-dimensional model with vertical sides. Its base is defined by the Namoi subregion bioregional assessment (BA) geological model (see companion product 2.1-2.2 (Aryal et al., 2018a) for more details) for the Surat and Gunnedah basins in the Namoi subregion (Bioregional Assessment Programme, Dataset 1). Its top is defined by the land topography (Caltech/JPL, Dataset 2).

The model’s outer boundary was chosen to extend beyond the outer boundary of the subregion and coincide with the preliminary assessment extent (PAE) in the northern direction. The limits of the model boundary have been selected to go beyond the expected hydraulic impacts of coal seam gas (CSG) development and coal mining in the Namoi subregion. The exception to this is in the eastern boundary where a natural boundary condition exists due to the presence of the Hunter-Mooki Thrust Fault.

The eastern boundary of the groundwater model along the Hunter-Mooki Thrust Fault is assumed to be a no-flow boundary (Figure 11). There might be some groundwater flow across this boundary, particularly in the alluvium, but the flux and timing are uncertain. Assumption of a no-flow boundary is conservative and follows the BA groundwater modelling methodology (see companion submethodology M07 (as listed in Table 1) for groundwater modelling (Crosbie et al., 2016)). The implication of this assumption in the predictive modelling is that groundwater to the east of the Hunter-Mooki Thrust Fault cannot contribute to the mining and CSG extractions, which if it was occurring would result in overprediction of drawdown at the model boundary.

No-flow conditions are assumed for all model layers along the northern boundary of the model (Figure 11). The Gunnedah Basin units continue with the corresponding Bowen Basin units along this boundary. For the model layers corresponding to the Great Artesian Basin (GAB) aquifers and other Surat Basin units, this boundary is approximately aligned with the regional flow direction within the Coonamble Embayment of the GAB (Ransley and Smerdon, 2012).

Assignment of a no-flow boundary condition to the north of the model implies that water sources north of this boundary cannot contribute to the CSG and mine water extractions within the Namoi subregion. Given that this boundary is far away from any expected hydraulic head changes induced by the mining and CSG operations this boundary condition best reflects the current understanding of the flow in this region. This also follows the precautionary principle as drawdown effects in the Namoi subregion will be overstated as flow from the Surat and Bowen basins in the north would be prevented because of the no-flow assumption. More research is needed to improve the understanding of flow across this boundary.

The north-west boundary of the model is aligned along the extent of the PAE in this direction (Figure 11). This boundary slightly extends beyond the western extent of the Lower Namoi alluvium. The head-dependent flow boundary condition is used for the model layers that exist along the north-west boundary. Similarly, a general-head boundary was used for the model layers representing the units of the Surat Basin to characterise the flow boundary in the straight western edge of the model. The general-head boundary condition was also used to characterise the flow across the south-east boundary of the model. These model boundaries are expected to have no influence on the simulation of drawdown changes caused by the coal mining and CSG development because of the large distance (>100 km) of these boundaries from the coal resource development locations. The head-dependent boundary condition was simulated using MODFLOW’s general-head boundary (GHB) package. However, influence of the hydraulic characteristics of these boundaries are further tested and evaluated in a stress-test of the model, reported in Section 2.6.2.7.3.1, to explore the prediction uncertainty caused by the uncertainty in the parameters of the GHB package. 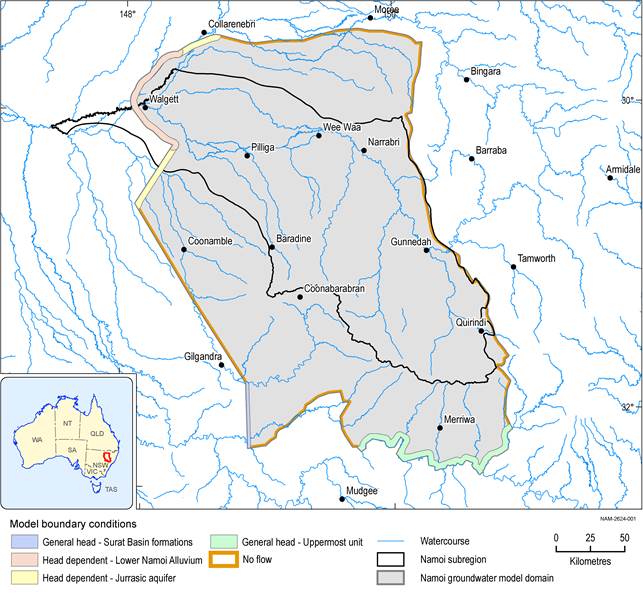