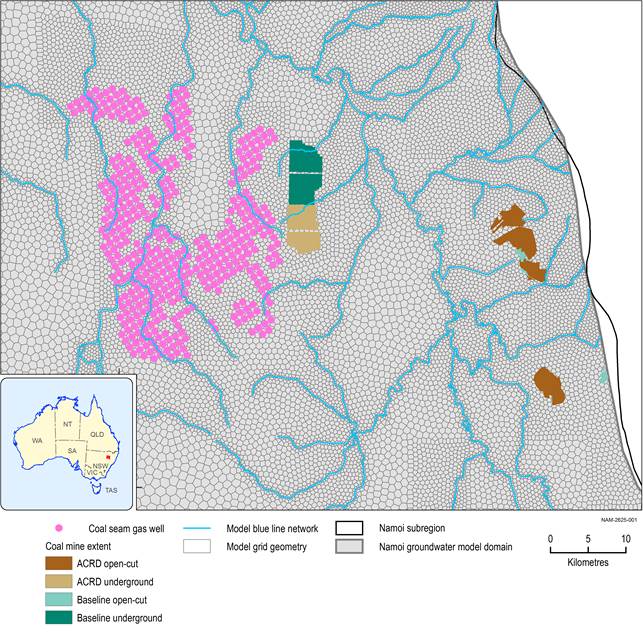 In the case of the Narrabri Gas Project, the latest information available from the CDM Smith (2014) report about the proposed sequence of drilling CSG production wells in the Pilliga region was used for implementing the drain boundary condition. Santos had developed a field development plan in the CDM Smith (2014) report for the purpose of assessing the potential impacts on groundwater resources for peak gas production of 200 terajoules per day (TJ/day). The field development plan is based on a maximum number of 425 CSG well pairs (850 wells) distributed across 18 water extraction areas. Owing to the large uncertainty, the water production rates are not directly used as a specified flux boundary condition in the bioregional assessment (BA) modelling for the Namoi subregion. Instead the head-dependent flux boundary condition implemented by using the DRN package is considered more appropriate to simulate the groundwater extraction by the CSG project. The large uncertainty in the water production curves is addressed in the BA modelling for the Namoi subregion by varying the drain conductance of the CSG wells over a wide range for the uncertainty analysis.

The void remaining after mining coal underground is not represented as a ‘hole’ in the model. Such holes are common in models coupled with geomechanics, and in models where very local-scale effects are being studied, such as assessing how much water is produced from the roof, floor and chain pillars. In the Namoi subregion groundwater model, water is simply extracted from the polygons, as described above.

The drain conductance for the open-cut and longwall mines and the CSG wells are varied in the uncertainty analysis (see Section 2.6.2.8). This is important since the estimated and reported historical flow rates are subject to errors, while future flow rates are necessarily predictions, informed by mine-scale groundwater modelling and assumptions about the hydrogeology and development of the mine, and are also uncertain.