There have been many groundwater models developed in the Namoi subregion for a variety of different purposes. This review identified two models of a sufficient scale and complexity that warranted a detailed investigation as to their suitability for use in the bioregional assessment (BA) for the Namoi subregion. The owners of both of these models made them available for use in BA. The Namoi Catchment Water Study model did not suit the stability requirements that is necessary for BA analysis and the Gunnedah Basin Regional Model has limitations around the conceptualisation of the alluvium and Great Artesian Basin layers. Neither model was able to be re-purposed for use in BA in its current form and this warranted the development of a new model for BA.

There have been many models developed over the years in the Namoi subregion for a variety of purposes. These range from small-scale investigations on mine sites (e.g. Rocglen (Douglas Partners, 2010)) to the scale of the entire Great Artesian Basin (Welsh, 2006). Table 4 lists a selection of the existing models in the Namoi subregion relevant to the BA. It is clear that models developed for mining developments generally have a smaller extent (area) and a smaller grid cell size than the models developed for coal seam gas (CSG) operations or water resources assessment. To be useful in a BA context, a model would need to cover (or be extended to cover) the region that encompasses all developments and the potentially impacted area from these developments (see companion product M07 (as listed in Table 1) for groundwater modelling (Crosbie et al., 2016)). In the Namoi subregion there are two models that fulfil this criteria and warrant further investigation: the Namoi Catchment Water Study (NCWS) model (SWS, 2012) and the Gunnedah Basin Regional Model (GBRM) developed for the Narrabri Gas Project (CDM Smith, 2014). The extent of these models is shown in Figure 6.

Table 4 Summary of existing models in the Namoi subregion 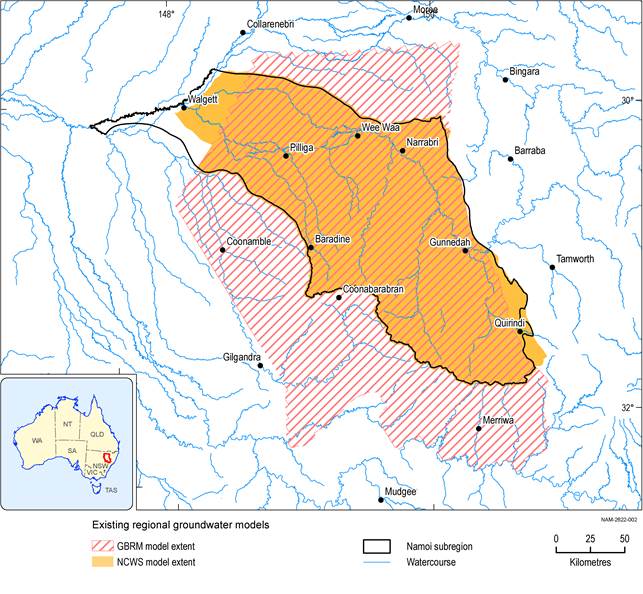