The information summarised in this section was obtained from Stratford Coal Mine Water Management Plan (Gloucester Basin, 2012) and Heritage Computing (2012). Stratford Coal Mine (SCM) water management is designed and operated to achieve no overflow from the main water storage areas (listed below) to the downstream watercourses including Avondale Creek, Dog Trap Creek and the Avon River. The main SCM water storage areas are (Figure 19):

Once mining operations are completed in the Bowen Road North Open Cut (BRNOC) (scheduled for end in 2014 (Heritage Computing, 2012)) and Avon North Open Cut (as of June 2015 this is currently estimated to be 2018 (Heritage Computing, 2012)), the voids would also be used as contained water storage areas. As of 30 June 2015, mining in the BRNOC has ceased and no activities have commenced in the Avon North Pit, part of the Stratford Extension Project (Yancoal, 2015b). The average inflows to the open-cuts (combined) over the life of the project are predicted to be about 401.5 ML/year, with the majority (approximately 98.5%) derived from the fractured rock groundwater system (Heritage Computing, 2012). SCM currently holds sufficient licence allocation under NSW’s Water Act, 1912 for the dewatering activities (i.e. groundwater inflows) associated with the fractured rock groundwater system.

Run-of-mine (ROM) coal from the DCM is transported by rail to the SCM, where it is processed along with ROM coal from the SCM and BRNOC. The majority of water used on site is for the coal handling and preparation plant (CHPP) and for dust suppression. On average the site has operated in surplus with yielding more water on average from the mine and mine infrastructure catchments than has been needed in supply for the mining and processing operations. This excess has been managed by containment in the Stratford East Dam, storage in Stratford Main Pit and historically controlled release to Avondale Creek under Environment Protection Licence No. 5161. Since the commissioning of reject disposal in the Stratford Main Pit in 2003, the Stratford Main Pit has been used for storage of excess water and the transfer of mine water to Stratford East Dam has ceased as have controlled releases of water to Avondale Creek. Stratford East Dam remains as a contingency storage for mine water in the future. 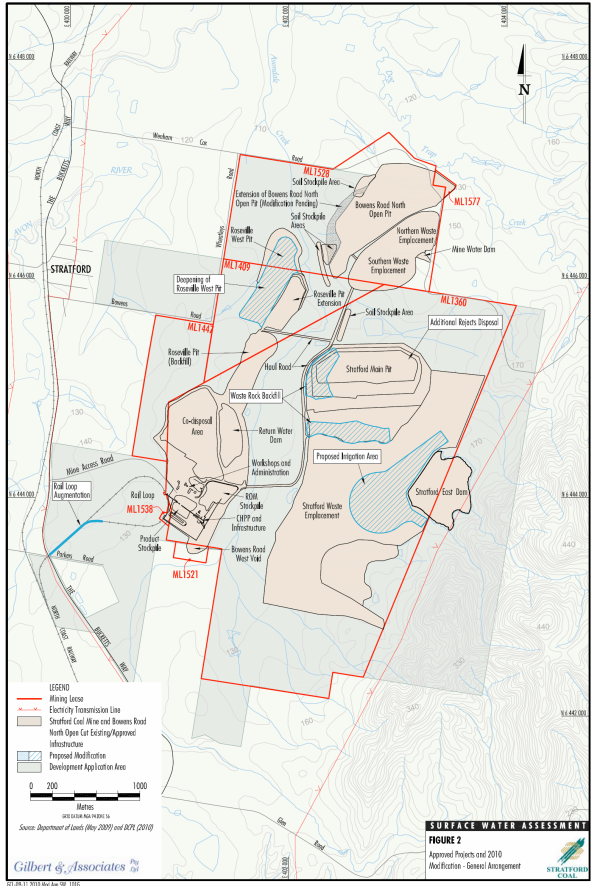 Source: Gloucester Basin (2012). This figure is not covered by a Creative Commons Attribution licence. It has been reproduced with the permission of Yancoal Australia.

Build up of excess water in the storages is avoided by maintaining an adequate freeboard (i.e. free space above the water level to the top of the pit) against rainfall-runoff from its catchment. Irrigation of water from the Stratford East Dam over approximately 23 hectares of a rehabilitated portion of the Stratford Waste Emplacement area will occur to reduce stored water on site and to assist the current pasture cropping programme on the rehabilitated emplacement.