Two types of observed data were used to develop and build a geological model: a deep wells dataset (NSW Trade and Investment, Dataset 1) and geophysical datasets (Bioregional Assessment Programme, Dataset 2; AGL, Dataset 3; Geoscience Australia, Dataset 4). The deep wells dataset consists of stratigraphic and lithological data extracted from well completion reports (see listing of well completion reports within the list of references following Section 2.1.2.3). The geophysical dataset comprises the digital elevation model (DEM) and published interpretation of seismic reflection data. The 1:100,000 scale Dungog geological map (Roberts et al., 1991) has also been used as a guide to determine the geological limits and the major structural trends in the subregion (see Section 1.1.3 in companion product 1.1 for the Gloucester subregion (McVicar et al., 2014)). The cross-sections associated with the geological maps are interpretative and thus not used in this model as we are producing a new interpretation of the hard datasets.

The deep wells data (NSW Trade and Investment, Dataset 1) provide information about the rock types, stratigraphic units and geological structure of the Gloucester subregion from geophysical logs, core and cutting analyses and test data. In order to make the geological model in the timeframe of the project, a set of wells crossing all the geological layers with homogenous interpretation have been selected among the petroleum wells accessible in the public domain. Groundwater boreholes usually do not reach deep structures and are not used in this modelling step.

aThe depths are measured depth (MD) relative to the kelly bushing reference height (KB). The coordinates are expressed in the coordinate system used in the well completion reports. The well abbreviations shown here are used to identify well locations in maps used later in this section.

Source: see the listing of well completion reports within the list of references following Section 2.1.2.3.

Well distribution varies within the Gloucester geological basin (inset (a) of Figure 6). The highest concentration is near the Gloucester Gas Project, with almost one-third of the wells concentrated within 7 km2, whereas the major part of the subregion is much less explored. The depths of these wells vary between 667.72 m MD (well Stratford 5A) and 1374.27 m measured depth (MD) relative to the kelly bushing (KB) (well Faulkland 1A). A kelly drive refers to a type of well drilling device on an oil or gas drilling rig. The kelly is the polygonal tubing and the kelly bushing is the mechanical device that turns the kelly when rotated by the rotary table. Together they are referred to as a kelly drive. 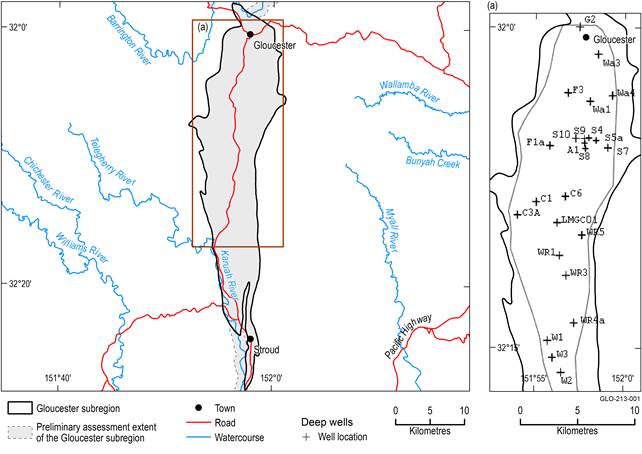 No major lithological variations were recognised from one formation to another. Most of the formations were deposited in a fluvial to deltaic environment and the main rock types are sandstone, siltstone, mudstone and coal. Consequently, the highest level of facies variation is in a horizontal direction within each formation. The correlation of coal seams between wells remains ambiguous given the high probability of discontinuity/pinch out of seams or lateral splitting. Over-correlation of seams could likely lead to local over-interpretation of faults (Section 2.1.2.2.4), however, based on the available data, it is difficult to estimate the amount of stratigraphic induced error (i.e. coal splitting) and the number and location of real faults.

The surface topography has been extracted from a DEM model described in Section 2.1.1 Geography of this product (Bioregional Assessment Programme, Dataset 2; Geoscience Australia, Dataset 4).