Stream stage comparisons to local groundwater levels are presented in consultant reports of the water balance and conceptual groundwater model of the Gloucester subregion (Parsons Brinckerhoff, 2013a, 2013b; AGL, Dataset 2), and the data is reproduced with permission in Figure 15. These data show that bores between 4 and 662 m distant from the gauge are consistently above the measured river stage. At times in 2013 and 2014 when the gauge is at cease-to-flow levels, the bores retain a water level above this value. There is a consistent gradient shown where the most distant bore has the highest water elevation, and slopes toward the stream gauge level as closer bores have levels more similar to the stream stage. This is a necessary condition for a gaining stream. 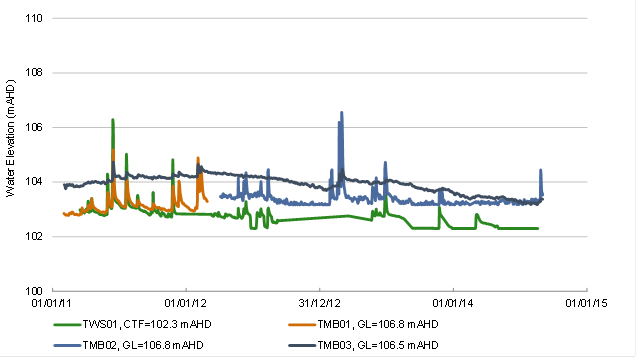 Data for single gauges and observation bores are presented in Figure 16. These are on tributary streams of the Avon River and show the same features as each other, and provide further support for the hypothesis that the Avon River is a net gaining system.

Flow and water quality data for the monitored streams of the Gloucester subregion were supplied by NSW Office of Water (Dataset 1). The water quality data from the NSW Office of Water consists of a series of samples taken at irregular intervals, and analysed for major anions and cations, salinity, turbidity, etc. Table 16 shows the first and last sample dates, along with the total number of electrical conductivity (EC) records over that period for Gloucester gauges.

There is no description of the sampling strategy, storage or analysis methods included with the quality data. The simplest parameters such as EC, pH, and temperature can be made in the field, while those more complex such as specific ion concentrations will be laboratory based. The accuracy of each measurement is related to the specific techniques and instruments used in the field or laboratory to derive them, and is unknown at this time.

As part of a water monitoring investigation, Parsons Brinckerhoff (2012) analysed the water chemistry of the alluvial aquifer, shallow weathered rocks, coal seams and interburden layers. They concluded that:

Note that in this quote, ‘TPH’ is an acronym for ‘total petroleum hydrocarbons’ and ‘BTEX’ represents ‘benzene, toluene, ethylbenzene and xylene’.

The water in the two aquifers appears to be similar, except that the shallow rock aquifer is more saline. This supports the hypothesis of discharge to the alluvial aquifer making it more saline, and then this water is mixed with rainfall recharge and discharged to the stream.