In the Sydney Basin bioregion, streamflow monitoring is undertaken by WaterNSW and DPI Water (formerly the NSW Office of Water). Figure 41 shows the location of DPI Water and WaterNSW streamflow gauges across the bioregion, including some discontinued sites. 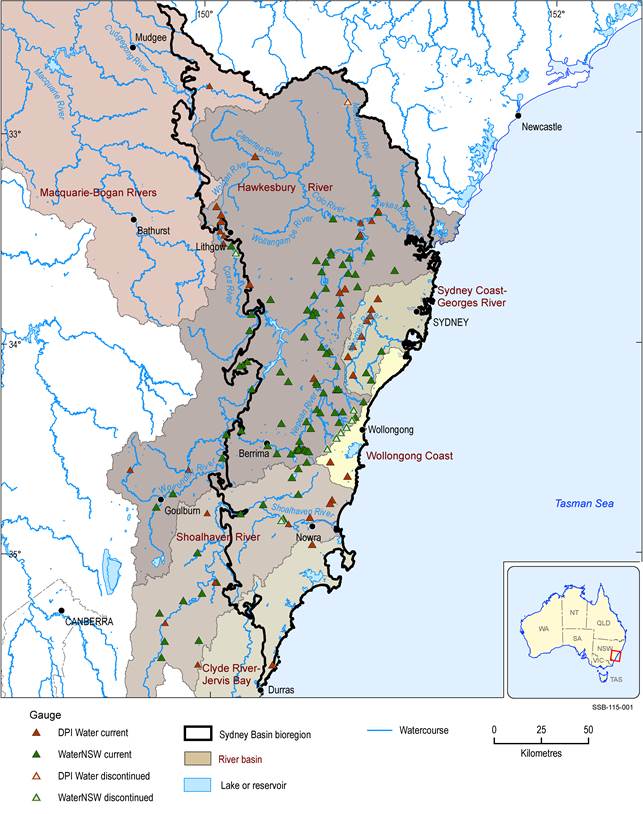 Figure 43 summarises the mean monthly flow characteristics for the Sydney Basin bioregion based on the streamflow data from the 68 gauging stations. On average, February has the highest proportion (0.14) of annual streamflow of all the months, although there is considerable variability around this. February is also the month with the highest mean monthly rainfall (Figure 18 in Section 1.1.2). A significant proportion (0.125) of total annual streamflow occurs on average in August, which tends to be one of the lowest rainfall months in the bioregion. It is not clear from mean monthly climate drivers for the bioregion (Figure 18 in Section 1.1. 2) why August should have high streamflow, but it could relate to the characteristics of rainfall in August, including high rainfall variability, and catchment wetness meaning rapid runoff responses when rain does fall. It could also be driven up by the localised areas of higher rainfall in the area just south of Bowral and Wollongong in August, contributing to high flows in upper Nepean, Avon and Cordeaux catchments and the Kangaroo River. September through to January is typically a low-flow period (spring to summer), with relatively low variability. This is consistent with potential evapotranspiration (PET) being more than double precipitation (i.e. aridity index >2) during these months (Figure 1 8 in Section 1.1. 2). Streamflow across the bioregion tends to be higher during autumn and winter as mean monthly PET approaches and drops below mean monthly precipitation. 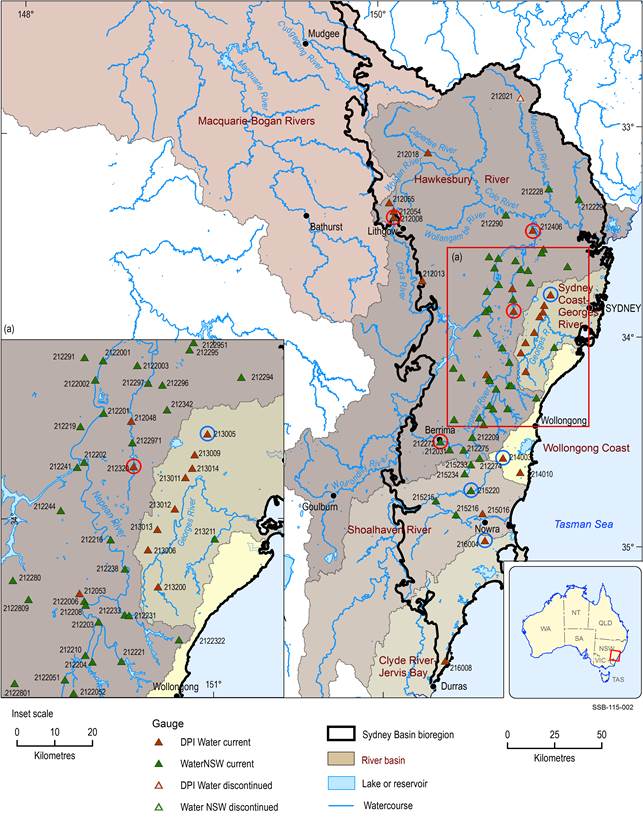 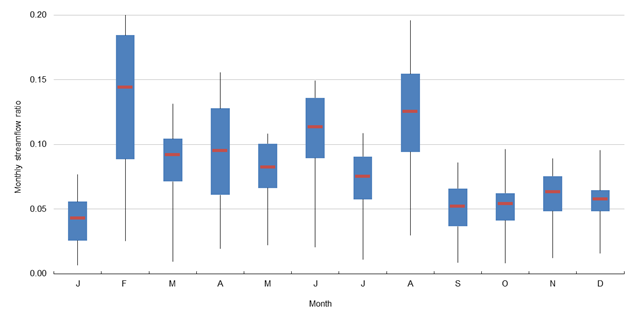 Table 1 7 summarises mean annual flows for a selection of gauging sites in each of the major river basins in the Sydney Basin bioregion. Selection was based on gauges with the most number of days of data and the start and end dates vary across the sites. Data are collected at sites with very small contributing areas (a few square kilometres) through to sites with large contributing areas (thousands of square kilometres), hence there is considerable variability in the mean annual flows. Many of the gauges, particularly in the Hawkesbury and Shoalhaven river basins, are downstream of dams and their flow regimes will differ from pre-dam flows. The release of environmental flows to maintain healthy water ways is a key objective of the Metropolitan Water Plan (NSW Government, 2010) in the Hawkesbury-Nepean river basin and will be reflected in the flow record of some gauging stations.

Annual time series have been generated for a number of gauging stations to illustrate some of the different flow characteristics of the rivers in the Sydney Basin bioregion (Figure 44 and Figure 45). Only years with >90% of daily streamflow values are used. A mean daily flow is calculated from the available flow data and multiplied by 365 to obtain an annual total. Gaps in the record reflect insufficient data, rather than zero-flow.

Annual streamflow is highly variable, but patterns are generally consistent with the bioregion-averaged annual precipitation (Figure 1 9a in Section 1.1. 2). The size, location and physical characteristics of the catchments will contribute to local variations. The hydrographs tend to show relatively high flows through from mid-1980s to early 1990s, with 1990 having the highest flows at all sites for which data were available since 1980. However, where streamflow records are available from the 1970s, they indicate a period of higher streamflow at those sites than has been experienced in the 30 years since. However, the bioregion-averaged annual precipitation for this period is slightly lower than the mid-1980s to early 1990s period, which suggests that differences in the timing and magnitude of precipitation events varied in these periods. Annual streamflow volumes showed a decreasing trend from the early 1990s through to the mid- 2000s. The return to higher streamflow following the Millennium Drought has been variable across the bioregion, with some streams showing only moderate increases (e.g. at gauging stations 215220 and 216004) and others more significant increases (e.g. at gauging stations 212272, 213005 and 214003). 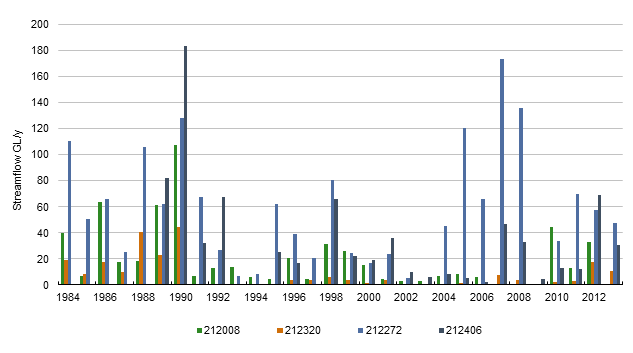 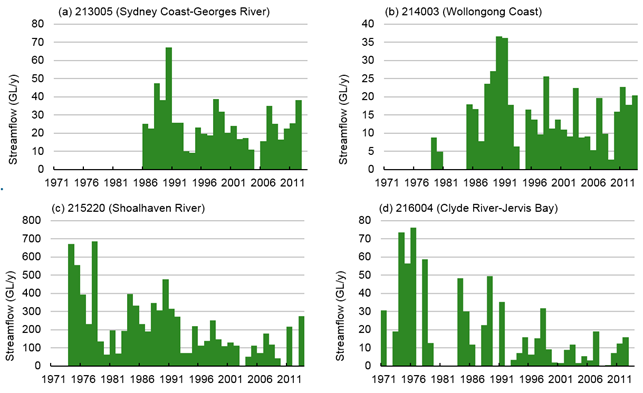