The Sydney Basin bioregion extends along the eastern Australian seaboard from the Hawkesbury River estuary in the north to just south of Durras on the southern NSW coast. Its western boundary is defined by the geological Sydney Basin and its eastern boundary by the Australian coastline (Figure 8). Most of the western boundary is east of the Great Divide with the headwaters of the Wollondilly and Shoalhaven rivers lying to the west of the bioregion. In the north-west, the bioregion crosses the Great Dividing Range into the westerly draining Macquarie river basin. The bioregion contains the major cities of Sydney and Wollongong, as well as some smaller urban centres including Lithgow in the west, Nowra in the south and a number of towns in the Southern Highlands. Just over 40% of the bioregion is used for conservation, including the Blue Mountains National Park, Wollemi National Park and Morton National Park.

The Sydney Basin bioregion is defined by geology in the west, the Hunter Range topographic divide in the north and the coastline in the east. Land surface elevations range from sea level to 1260 mAHD (metres Australian Height Datum) at Mount Coricudgy in the north (Figure 8). Much of the bioregion is characterised by relatively rugged terrain associated with the heavily dissected rock outcrops of the Hawkesbury Sandstone. Inland from Sydney and Nowra and south of Wollongong, the terrain is flatter, reflecting the development of coastal plains from the interactions of rivers with the sea. The tableland areas around Berrima in the Southern Highlands and west of Mount Coricudgy also have flatter relief. Figure 9 shows some very marked breaks of slope where the rugged Hawkesbury Sandstone country meets the coastal plains, with dramatic cliffs, giving way to short, steep colluvial slopes and then flat alluvial environments.

The coast is characterised by drowned river valleys and coastal lake systems. Around Sydney, these include Broken Bay, Port Jackson, Botany Bay and Port Hacking; moving southward, they include Lake Illawarra, Sussex Inlet, Lake Conjola and Burrill Lake – all are important water bodies for recreation and habitat (Figure 10). 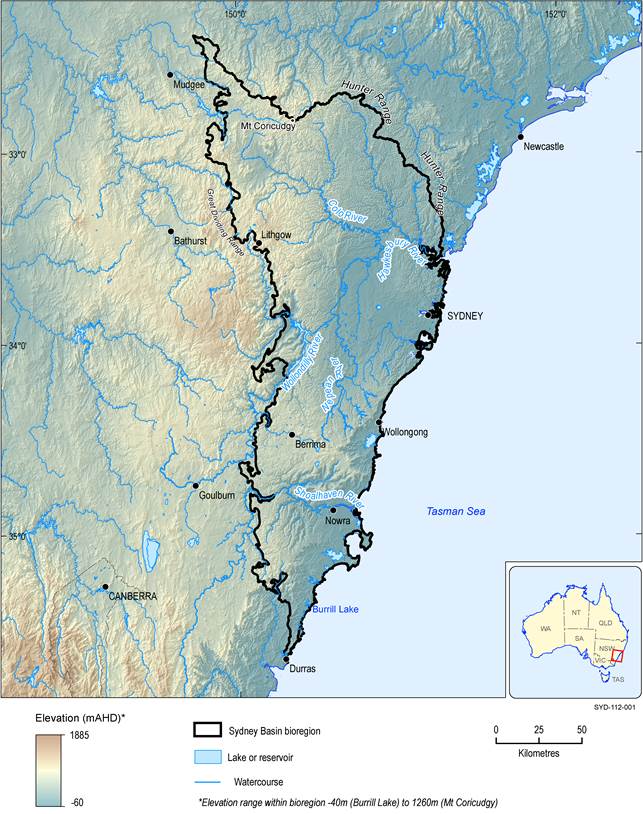 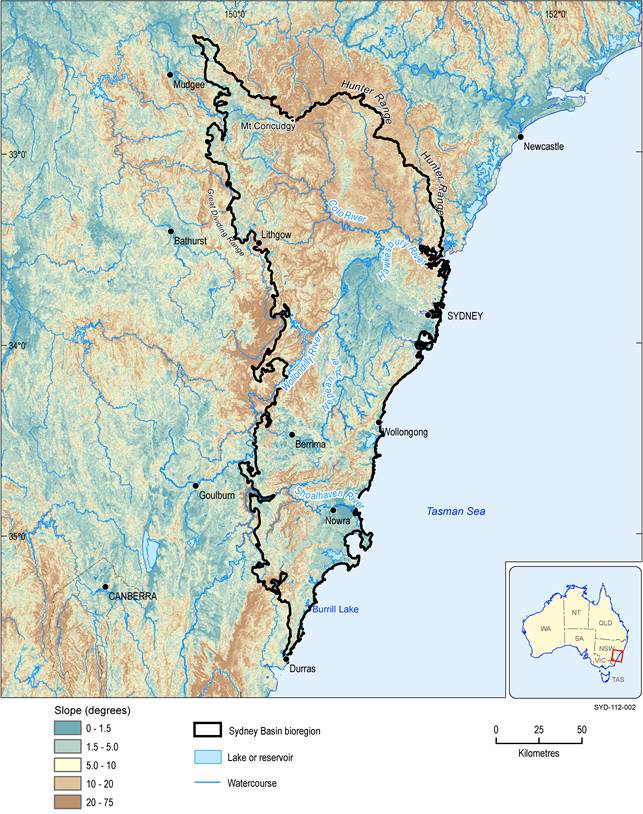 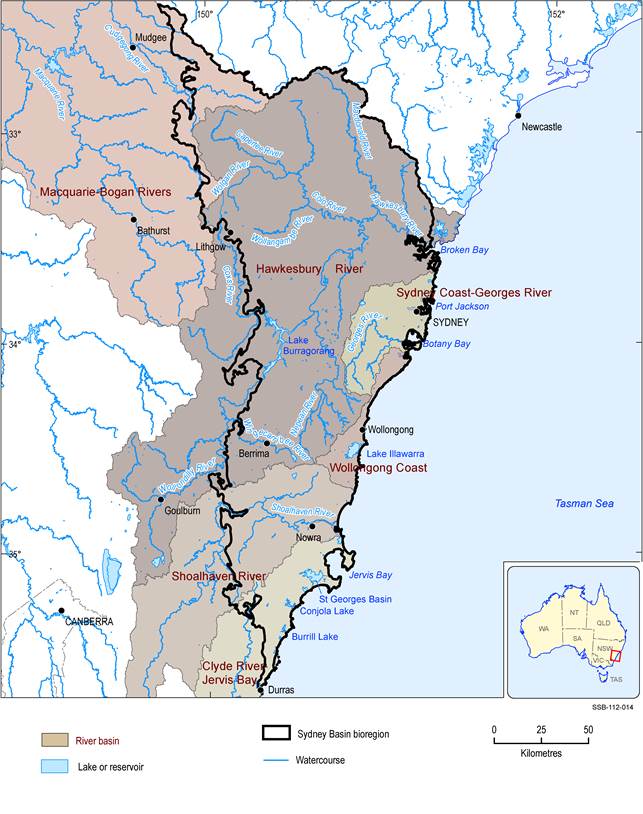 The Sydney Basin bioregion is comprised of four physiographic regions of the Australian Soil Resource Information System (ASRIS) (Figure 11). Physiographic regions are defined by an internal coherence of their landform characteristics and underlying geology (Jennings and Mabbutt, 1986). They are considered to be areas of similar landform evolutionary history, which have given rise to similar groups of regolith materials, such that the resultant mapped units can be described in terms of landform, underlying geology, regolith and soils (Pain et al., 2011). The main ASRIS classes are (i) Hawkesbury-Shoalhaven Plateaus, (ii) Bathurst Tablelands, (iii) Cumberland Lowland and (iv) Monaro Fall. Figure 11 shows a tiny intersect with the Goulburn Corridor in the north, which likely reflects scale of mapping. It is not included in Table 6. The Interim Biogeographic Regionalisation for Australia (IBRA) subregions shown in Figure 6 of Section 1.1 .1 broadly conform to these physiographic regions (Table 6). Table 7 summarises the IBRA subregions by geology, landform and soils. 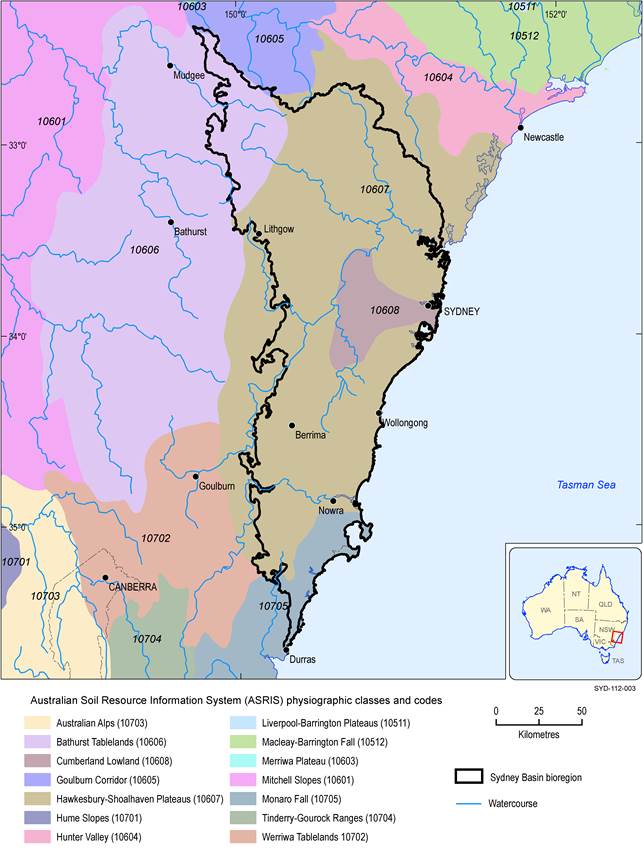 Table 7 Geology, landforms and typical soils of the main Interim Biogeographic Regionalisation for Australia subregions in the Sydney Basin subregion

bsource document does not differentiate between Capertee Upland and Capertee Valley

Soils of the Sydney Basin bioregion can be classed into seven main Australian Soil Classification (Isbell, 2002) soil types (Figure 12): Tenosols (25%), Kurosols (22%), Kandosols (16%), Rudosols (15%), Dermosols (10%), Sodosols (6%) and Chromosols (4.0 %). Localised occurrences of Ferrosols, Hydrosols, Podosols and Organosols have also been mapped. The Hawkesbury-Shoalhaven physiograpic province is dominated by Tenosols, Dermosols and Kandosols in the north and west, with Kurosols, Rudosols and Ferrosols becoming more important to the south; the Cumberland Lowland province is characterised by Sodosols and Kurosols; that part of the Monaro Fall province that lies within the Sydney Basin bioregion is dominated by Kurosols; and the Bathurst Tablelands province, which includes the Capertee Uplands and Capertee Valley IBRA subregions, has a wide mix of soil types, including significant areas of Chromosols and Sodosols. Characteristics of the main soil types are summarised below, ordered by descending area.

Tenosols are soils which are young, typically very sandy and exhibit a weakly developed soil profile, except perhaps for the A horizon. They generally have low agricultural potential due to low chemical fertility, poor structure and low water holding capacity.

Kurosols tend to develop in mid- and lower slope positions. They are characterised by a clear, sharp textural boundary between coarser textured A horizons (e.g. sands or loams) and finer textured (i.e. clayey) B horizons (Isbell, 2002). The surface of the soils is often acidic (pH <5.5). These soils are found predominantly in the Cumberland and Monaro Fall IBRA subregions.

Kandosols do not exhibit strong texture contrast between the A and B horizons. Instead the B horizon tends to have a massive or weakly developed structure. They have moderate chemical fertility and water holding capacity.

Rudosols are generally associated with upper slopes, ridges and crests. These soils are poorly developed and typically young, so have had little time to develop structure. They may be deep or shallow, and either clayey, or loamy or sandy throughout the profile. Rudosols may also be stony.

Dermosols are likely to be dominated by clay that is near uniform to slowly changing in texture in the profile (Isbell, 2002). These are well-structured soils and generally more clayey in the floodplains, where the deepest soils in the Sydney Basin bioregion are likely to be found. They occur in the lower lying parts of the Hawkesbury-Shoalhaven Plateau, north and east of Lithgow, and along the coast to the south of Wollongong.

Sodosols generally develop on lower hillslopes or in perched upper slope locations. They are often associated with salinity (e.g. at seeps or where drainage is poor). Soils exhibit a strong contrast in textures between topsoil and poorly structured, dispersible clay subsoils. Agriculture can be a challenge due to structural issues (caused by excessive sodium ions) and salinity. In the Sydney Basin bioregion, Sodosols occur in the western parts of the Cumberland IBRA subregion, east of the Nepean River and in the north-west corner of the Capertee Valley and Capertee Uplands IBRA subregions.

Chromosols have a strong texture contrast and form from quartz-rich parent material. In the Sydney Basin bioregion, they are found in the upper Capertee river basin and in the Nepean river basin in the south of the Cumberland Lowlands physiographic province.

Organic rich soils are typical of the bioregion’s many swamps and estuarine areas. 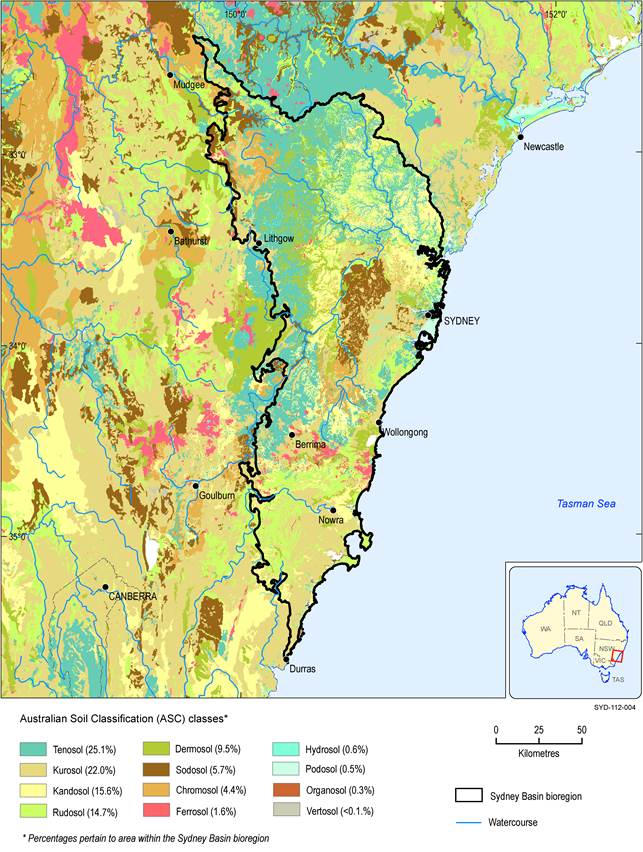 Figure 13 shows the land cover in the Sydney Basin bioregion in 2008, based on remotely sensed data that are post-processed to convert vegetation greenness to a land cover type (Geoscience Australia, Dataset 9). The bioregion is overwhelmingly dominated by trees, reflecting (i) good rainfall, (ii) the rugged topography (i.e. difficult to develop) of the deeply incised sandstone country of the Blue Mountains and Illawarra and Southern Highlands escarpments, and (iii) the associated conservation status of significant tracts of the bioregion and the protected area status of much of the water supply catchments around Sydney and Wollongong (see also Figure 15). Major vegetation type mapping of the bioregion (Figure 48 in Section 1.1.7) indicates that these treed areas are mostly different eucalypt forest and woodland types, but that the lower density treed areas of the Cumberland IBRA subregion around Sydney include cleared, non-native vegetation and buildings. Areas of irrigated pasture are evident along the coastal zone between Wollongong and Nowra, with much of the rest of the land cover being classed as rainfed pasture. 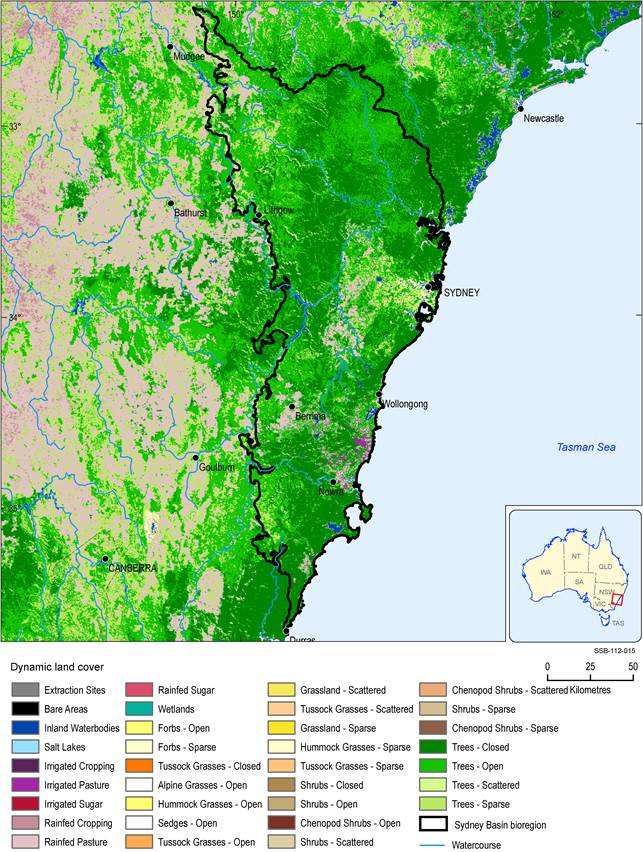