1.1.6.1 Connectivity between groundwater and surface water

Assessments of surface water – groundwater connectivity were undertaken as part of the Murray-Darling Basin Sustainable Yields Project (Parsons et al., 2008). The connectivity mapping was based on a snapshot in time of fluxes to or from the major rivers. The assessments used data from June 2006 – a time that represented a historically low-flow period in the subregion (CSIRO, 2007a, 2007b). Results of the connectivity mapping are shown in Figure 30. It is apparent that while many of the systems to the east of Moree are classified as gaining (i.e. groundwater discharges to them), most streams in the west of the subregion are classified as losing (i.e. surface water recharges groundwater). The ‘high losing’ stream reaches in this area are reportedly associated with a zone of increased hydraulic conductivity which correspondingly results in greater seepage to the subsurface.

The Dumaresq and Macintyre rivers in the north (Figure 5) are mostly classified as losing in the area of the NSW Border Rivers Alluvium and NSW Border Rivers Tributary Alluvium (see Figure 22). While CSIRO (2007b) indicated that comparisons between river levels and groundwater levels over time at select locations commonly showed that the surface water – groundwater level relationship is maintained in most areas where assessed (Figure 30), gaining conditions in some stream reaches in the north could be reversed over short time periods in response to flood events.

In contrast to CSIRO (2007b), Kellett and Stewart (2013) note that recharge to groundwater from the Dumaresq and Macintyre rivers is not strongly manifested in the groundwater surface (see Figure 25) which generally suggests either no interaction with streams or that there is discharge to them in many areas (although the area near Goondiwindi does show groundwater mounding near the Border Rivers). While limited interaction is also suggested by the groundwater contours further south in the area of Moree and surrounds at the scale of individual streams, overall groundwater contours are commensurate with an area of general recharge in the area west of Moree where CSIRO (2007b) classified most river reaches as losing.

Kellett and Stewart (2013) note that the configuration of the shallow GAB groundwater surface suggests that the Border Rivers are drains for GAB groundwater that may contribute a significant component of baseflow to them.

Based on the analysis of groundwater hydrographs, Carr and Kelly (2010) identified zones in the floodplain along the Gwydir River upstream of Moree where aquifers within 100 m depth are locally hydraulically connected to the river and zones where the deep aquifers are disconnected from the shallow aquifers that do not receive direct river recharge. They found that shallow groundwater tables in the Gwydir river basin (e.g. in bores south of Pallamallawa as well as north of Moree) responded to the large flood events for some years but not for others, suggesting that recharge to groundwater may only occur when there is sufficient wetting of the vadose zone and hydraulic loading from flood waters.

Connectivity was also investigated along the Dumaresq River (~20 km stretch) and at two transects (Site 1 and Site 2) (Lamontagne et al., 2011b). The Dumaresq River was connected at the two sites visited in October 2009, but Site 1 was gaining and Site 2 was losing to the alluvial aquifer. The surface water and groundwater chemistry indicated that the river reach received some old regional groundwater discharge. Thus, the Dumaresq River is considered to be either a gaining or a flow-through system at the regional scale, at the study reach. The gaining transect had significant bank recharge–discharge cycles during floods but the losing transect was apparently consistently losing (Lamontagne et al., 2011b).

In summation, there is some useful detailed information on connectivity in the Gwydir subregion available for specific locations, however details are lacking in many areas and available information appears contradictory in places. This is likely to be due to variations in study site locations, and climate and rainfall patterns at the time of the studies. 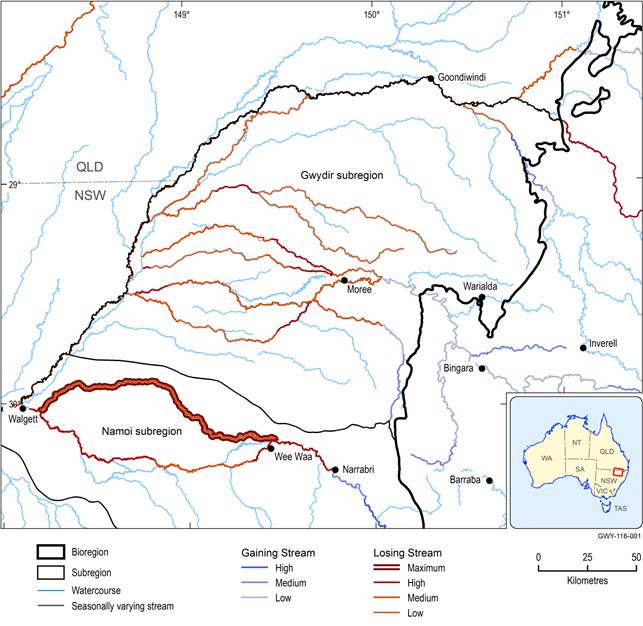 Figure 30 Surface water - groundwater connectivity in the Gwydir subregion. Note that many streams are not classified

Maximum losing conditions occur where the watertable is separated from the streambed by an unsaturated zone. The additional classification of high, medium or low losing for these reaches refers to the flux from streambed to watertable.