Beyond Moree the stream network forms a delta-like structure (Figure 29) which merges with the floodplains of the Barwon and Macintyre river basins in the north and the Namoi river basin in the south (NSW DECCW, 2011). East of Moree, the Mehi River Anabranch (to the south) and Gil Gil Creek (to the north) split from the Gwydir River. The Mehi River has a major anabranch, Moomin Creek, and a number of tributaries including Tycannah, Mallowa, Tarran and Goonal creeks. The Thalaba Creek is an anabranch and the Gurley and Wolongimba creeks are tributaries of Moomin Creek. These distributaries inundate the floodplain wetlands during periods of high flows from the upper catchment.

Downstream of Moree at the Tyreel Weir, the Gwydir River splits into Gingham (northern arm) and Lower Gwydir (also called the Big Lather Watercourse) watercourses, both terminating in the Gwydir Wetlands (Figure 29). There are four Ramsar-listed sites in the northern and central areas of the Gwydir Wetlands. Before 1946, the majority of small floods entered the Lower Gwydir Watercourse and only large floods reached the northern Gingham Watercourse. However, due to a 1.6 km long log-jam (the raft) created by the accumulation of timber, debris and sediments in the Lower Gwydir Watercourse downstream of Moree, an increased proportion of flows now enters the Gingham Watercourse (BRG CMA, 2010). However, the Tyreel regulator helps to reregulate the flow by allowing water to be redirected back into the Lower Gwydir River (MDBA, 2012a).

The Gwydir is regulated by the Copeton Dam and several weirs. Before regulation, water inundated the Gingham and Lower Gwydir floodplains and wetlands and only flowed through to the Barwon River in major floods. Water from the Mehi River, and to a lesser extent from Gil Gil Creek, now frequently flows into the Barwon at low volumes (MDBA, 2014). Since regulation, there has been a substantial reduction in the area of the Gwydir Wetlands (MDBA, 2012a). 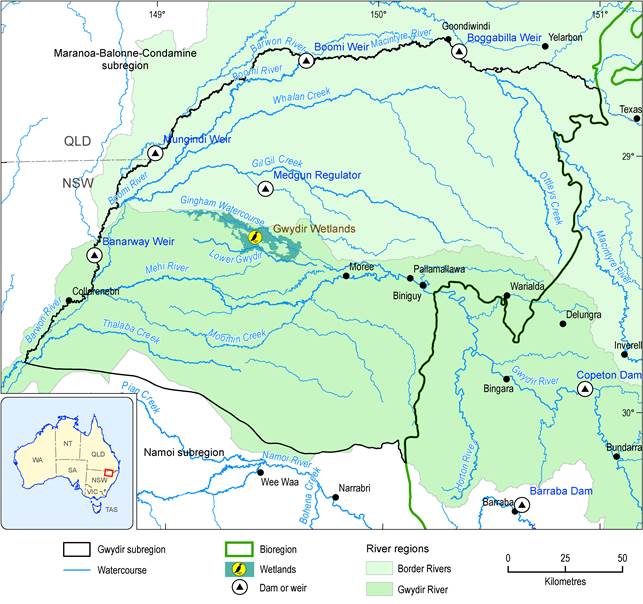 Figure 29 Stream network and main locations in the Gwydir subregion

The Copeton Dam (1364 GL capacity, completed in 1973), which is outside of the subregion, is the main public water storage dam on the Gwydir River. It provides for town water supplies, irrigation, stock and domestic use, industry, and environmental flows along the Gwydir River and its distributaries. A series of weirs and regulators assist in diverting water to the various watercourses of the Lower Gwydir catchment (NSW DPI, 2014). Some of the major weirs and regulators in the Gwydir river basin are the Tareelaroi, Boolooroo, Tyreel and Combadello weirs, and Gundare and Mallow Creek regulators.

A number of private on-farm dams also exist for irrigation. The estimated total volume of hillside dams, weirs and ring tanks in the Gwydir river basin is 84, 16 and 351 GL respectively (Webb, McKeown and Associates Pty Ltd, 2007). There are about 150 irrigating agricultural businesses and most irrigation diversions occur below Pallamallawa through a network of weirs and regulators on the Gwydir River and its distributaries (Burrell et al., 2012). The major irrigation districts are near Moree and east of the Gwydir Wetlands on the fertile soils of the floodplain (Carr and Kelly, 2010). The Mehi River and Carole and Gil Gil creeks are channelised to assist with delivery of water to the irrigation industry.

Environmental water requirements have been determined for the Lower Gwydir, Gingham and Mallowa watercourse management units. The flow indicators for these management units are aimed at maintaining wetland and floodplain vegetation to provide conditions favourable for fish and bird breeding (MDBA, 2012a).

The ten year (2004 to 2014) Gwydir Regulated River Water Sharing Plan (WSP) applies to the section of the Gwydir River downstream of Copeton Dam to the junction of the Gwydir (and its regulated distributary streams) and Barwon rivers. Some of the Gwydir regulated river water sources include sections of: Boomi River, Carole Creek, Gil Gil Creek, Gwydir Pool, Mehi River, Moomin Creek and Tyreel Anabranch (NSW Office of Water, 2013).

The surface water long-term average annual extraction limit of the Gwydir regulated river water source under the WSP is 392 GL (NSW Government, 2014a) and for the whole of the Border Rivers is 399.4 GL to be shared between NSW and Queensland (NSW Government, 2013a). The subregion also borders the Barwon-­Darling unregulated river water source for which the long-term average annual extraction limit is 214 GL (NSW Government, 2013b). Table 12 lists the major surface water entitlements in the Gwydir river basin. The share components of the high security, general security and supplementary licences are expressed as a number of unit shares (DIPNR, 2004). The unit share is the share of water allocated to licence holders as determined by the ‘Available Water Determination’ (AWD) in volume per unit share. Available water determinations are made under section 59 of the Water Management Act 2000. The volume of water allocated to a water account is calculated by multiplying the number of unit shares on the licence by the volume per share stated in the AWD (DIPNR, 2004). AWDs are made for each licence category in each water source and are generally made at the start of a water year.

The Murray–Darling Basin Authority estimates the surface water long-term average baseline diversion limit for the Gwydir river basin (SS22) to be 450 GL/year (MDBA, 2012b). The limit on interception by runoff dams is set at 125 GL/year (including 1 GL/year of interception by commercial plantations). Therefore, the Murray–Darling Basin Authority estimate of the surface water (baseline) diversions minus the interception by runoff dams in the Gwydir is 325 GL/year (as per Schedule 3 of the Commonwealth’s Basin Plan 2012). The water recovery effort was 50 GL for the Gwydir as at 31 March 2014; and Transition to new Sustainable Diversion Limits by 2019 is an ongoing process. The 325 GL/year limit includes 314 GL/year from regulated rivers and by floodplain harvesting (excluding take under basic rights), and 11 GL/year from watercourses other than from regulated rivers (excluding take under basic rights).

The sustainable diversion limit (SDL) under the Basin Plan requires that the surface water long-term average diversion limit be reduced from 450 GL/year by 42 GL/year to meet local environmental targets plus any apportionment of the northern Basin zone shared reduction target set by the Basin Plan (MDBA, 2011). The SDL will come into effect in 2019 following the completion of the northern basin review, the operation of the SDL adjustment mechanism and apportionment of any shared reduction target in 2016, all of which may lead to further reductions in the Gwydir SDL resource unit.