The Flat Top Formation formed in a delta fan to shallow marine setting and is composed of siltstone, sandstone, mudstone, conglomerate, coal and tuff (Draper, 2013).

The Banana Formation is an assemblage of mudstone, shale, siltstone, sandstone and with minor coal formed during the Late Permian in brackish to marine settings (Green et al., 1997). 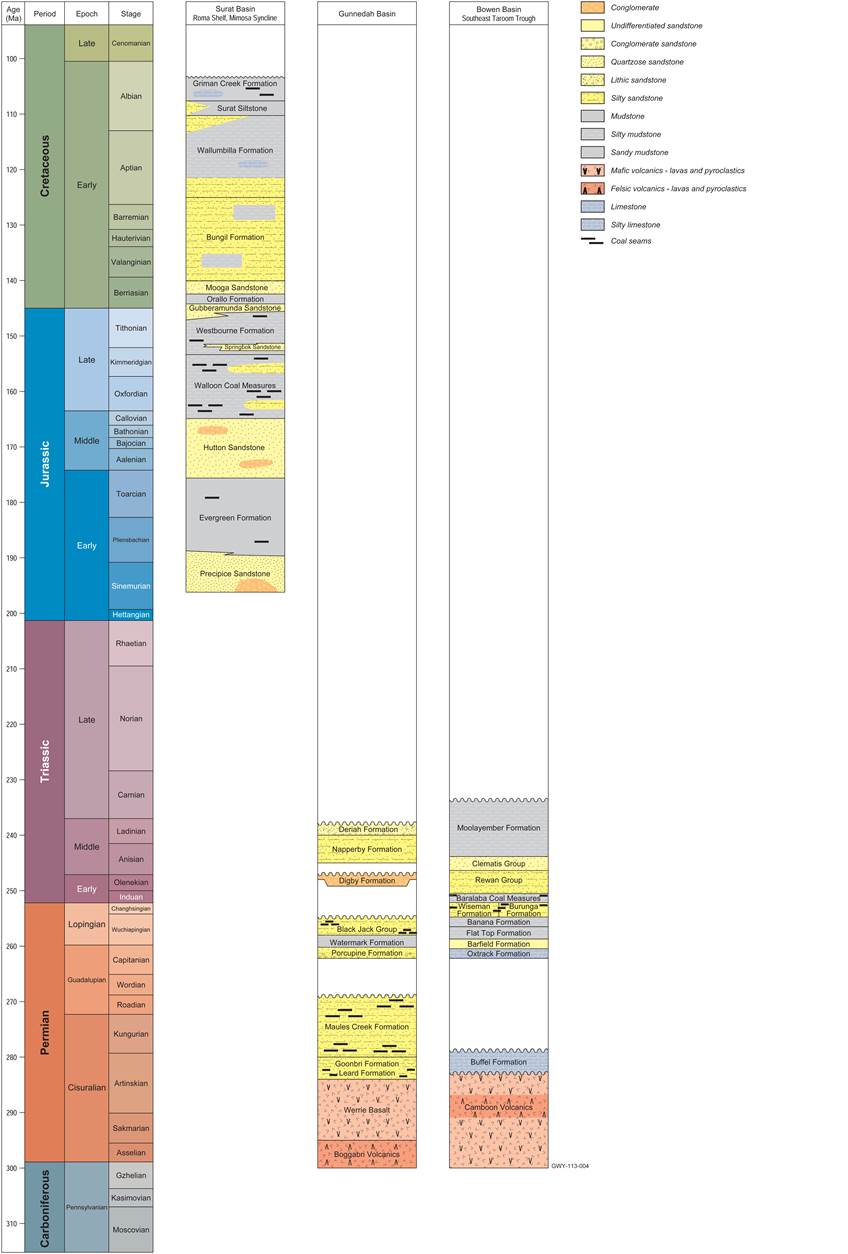 The Pamboola Formation consists of sandstone, siltstone, claystone, conglomerate and coals (Australian Stratigraphic Units Database, 2013). The Melvilles Coal Member is an important component of this unit and is a high quality and thick coal seam, covering a large area (Hamilton, 1985). It is thickest in the east of the Gunnedah Basin, up to 3.5 m, but thins towards the western boundary (Hamilton, 1985). In the south-east, this seam splits into two (Hamilton, 1985). This unit forms part of the Brothers Subgroup in the Black Jack Group (Australian Stratigraphic Units Database, 2013).

The Hoskissons Coal unit varies from 2.4 to 18 m thick (Hamilton, 1985). It formed in a lagoonal and swamp environment, and is composed of coal and carbonaceous siltstone (Beckett et al., 1983; Hamilton, 1985). This formation is part of the Coogal Subgroup of the Black Jack Group (Australian Stratigraphic Units Database, 2013).

The stratigraphy of the Surat Basin varies across its 300,000 km2 area, and distinct lithostratigraphic packages are defined for the main structural domains of the basin. The rock units defined for the NSW part of the Surat Basin (which includes the Coonamble Embayment and the Boomi Trough) differ from those in the better-known Queensland part of the basin. In particular, coal-bearing formations in the Coonamble Embayment region are less common and markedly thinner than in Queensland. For example, the Walloon Coal Measures do not occur in this area, and the stratigraphic correlative, the Purlawaugh Formation, contains only thin coal seams. Below are brief summaries of the coal-bearing stratigraphic units within the Gwydir subregion of the Surat Basin, and the hydrogeologically important Pilliga Sandstone.

The Evergreen Formation is more commonly described from Queensland, although it may occur in far northern NSW. It consists of siltstone, shale, sandstone and coal which formed in a fluvial depositional setting on a coastal plain, with possible deltaic influence (Exon, 1976; Cook and Draper, 2013). The formation contains two sub-units, the Boxvale Sandstone Member and the Westgrove Ironstone Member (Exon, 1976; Cook and Draper, 2013). The Boxvale Sandstone Member, consisting of sandstone, siltstone and coal, was deposited during a brief marine transgression (Exon, 1976).

The Walloon Coal Measures are the most significant coal resource in the Surat Basin and the unit targeted for coal mining and CSG within the basin. It is a compositionally varied formation that consists of thinly bedded claystone, shale, siltstone, sandstone (lithic and sublithic to feldspathic arenite), coal seams and minor limestone (Exon, 1976). A muddy pebble conglomerate also occurs in several locations (Exon, 1976). The depositional environment is interpreted as fluvial and swampy plains (Exon, 1976). In Queensland, the Walloon Coal Measures can be sub-divided into four units: the Durabilla Formation, Taroom Coal Measures, Tangalooma Sandstone and the Juandah Coal Measures (Exon, 1976; Swarbrick, 1973). The Taroom Coal Measures are a mixed sequence of sandstone, siltstone and mudstone, with abundant coal and carbonaceous mudstone interbeds (Scott et al., 2004). A mixed assemblage of sandstone, siltstone, mudstone, claystone, tuff and thin coal to carbonaceous mud seams form the Tangalooma Sandstone (Rohead-O’Brien, 2011). The sandstone is commonly heavily cemented or infilled with clay (Rohead-O’Brien, 2011). The Juandah Coal Measures are similar in composition and coal volume to the Taroom Coal Measures (Scott et al., 2004).

The Purlawaugh Formation is an Early to Middle Jurassic unit within the Coonamble Embayment composed of sandstone with beds of siltstone, mudstone and rare coal (Radke et al., 2012). The Purlawaugh Formation is the stratigraphic equivalent of the Walloon Coal Measures in the Mimosa Syncline further to the north-north-east of the Gwydir subregion (Radke et al., 2012).

The Westbourne Formation is a Late Jurassic formation of interbedded mudstone, siltstone, sandstone and some coal (Exon, 1976).

The Orallo Formation is composed of thin beds of siltstone and mudstone with some sandstone and minor conglomerate and coal deposited by fluvial channels in the Early Cretaceous to Late Jurassic (Exon, 1976).

Griman Creek Formation is a sandstone-dominated unit grading in places to siltstone and mudstone. Minor conglomerate and coal bands occur throughout and are more common in the upper section (Exon, 1976). The lower part of the Griman Creek Formation (Wallangulla Sandstone Member) is interpreted to have formed in a marine environment whereas the upper section (Coocoran Claystone Member) is interpreted as non-marine (Exon, 1976).

The youngest geological units in the Gwydir subregion are Cenozoic volcanic deposits and alluvial to lacustrine sediments associated with modern rivers and paleovalleys. The basaltic lavas of the New England Tablelands (Central Province Volcanics) occur in the east of the subregion, and the Nandewar Volcanic Field (hawaiite, trachyandesite, tristanite, trachyte and tuff) (Stroud and Brown, 1998) in the south-east. These were formed from localised volcanic eruptions during the Paleogene and Neogene, and locally intrude and overlie the Surat and Gunnedah-Bowen Basin strata.