Shallow groundwater levels are shown on Figure 25 for the alluvium in the Gwydir subregion and surrounds. It is apparent that shallow groundwater generally flows from the high ground in the east towards the west. Refer to Figure 23 for the extent of groundwater systems and management areas discussed below. 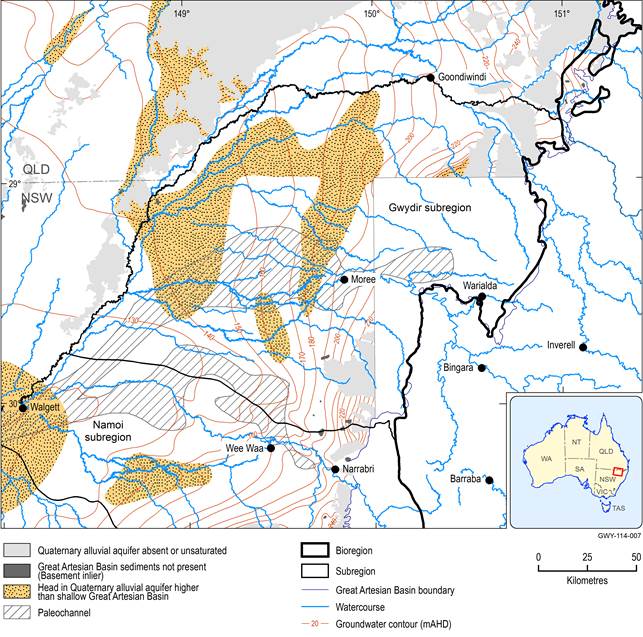 Figure 25 Groundwater levels (post-2000) in the Narrabri Formation showing areas where groundwater heads are higher than in the upper parts of the Great Artesian Basin. The outlines of paleochannels are shown

Only paleochannels that fall within or partially within the Gwydir subregion are shown. Other paleochannels are known to exist (e.g. in the Border Rivers) but maps of them could not be found in the literature.

The Lower Namoi Alluvium is only considered briefly here. A more detailed discussion is included in the context statement for the Namoi subregion (Welsh et al., 2014).

Groundwater level contours for water in the uppermost units of the Surat Basin presented by Kellett et al. (2012) are shown on Figure 26. The water levels mostly represent water in the Drildool and Keelindi beds in the area, but in the east of the Gwydir subregion the watertable is in the exposed rocks of the Pilliga Sandstone. The groundwater surface tends to be topographically controlled. It suggests minimal interaction between the upper units of the GAB and the Namoi and Gwydir rivers but distortions in the contours near the Border Rivers suggest some interaction in this area. 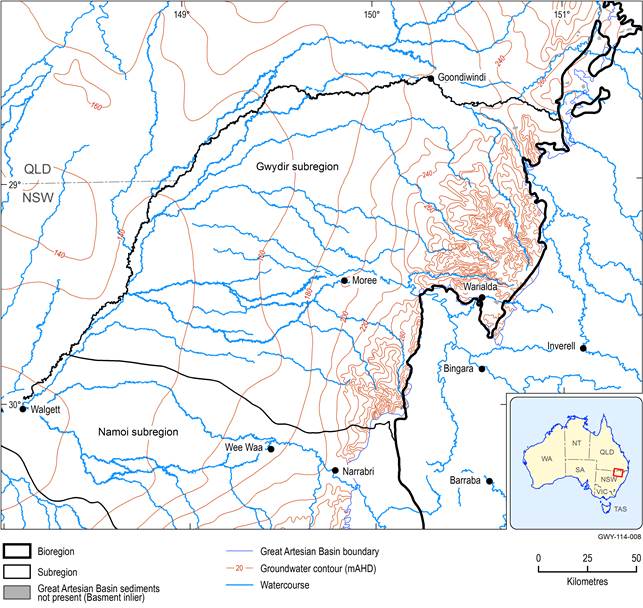 No literature relating to groundwater levels and flow in the Gunnedah-Bowen Basin was identified during this study of the Gwydir subregion.

As outlined in preceding sections, while the alluvium in the Gwydir subregion is typically separated in literature into the overlying Narrabri Formation and underlying Gunnedah Formation (with the Cubbaroo Formation locally present at the base of the Namoi paleochannel in the far south), the contact between them is difficult to determine lithologically and some question the validity of this separation. Some degree of hydraulic connectivity is often reported between the aquifers of both formations (e.g. Carr and Kelly, 2010), with leakage from the Narrabri Formation commonly cited as a source of recharge to the Gunnedah Formation aquifers.

Kellet and Stewart (2013) indicate that intense weathering of exposed GAB rocks prior to deposition of overlying alluvium resulted in development of a basin-wide saprolite layer. This layer has a low permeability basal portion that is considered to reduce connectivity with overlying systems. Kellet and Stewart (2013) state that in some places the saprolite has been removed by erosion making hydraulic connection possible. Such areas occur beneath paleochannels, of which there are reportedly many in the Surat Basin, commonly occurring beneath or next to modern stream channels. Depending on the relative head levels between the alluvium and GAB, there may be upward or downward flow of water in these areas (see Figure 25).

In the Gwydir subregion, Kellett and Stewart (2013) indicate that areas where upward flow of water from the GAB to the overlying alluvium are highly likely to include:

Kellett and Stewart (2013) do not identify any areas in the Gwydir subregion where they consider groundwater flow from the alluvium to the underlying GAB formations to be highly likely.

It is emphasised that relative heads and thus potential flow directions are not fixed and may change over time in response to stresses such as groundwater extraction (e.g. for irrigation or coal seam gas development).

While a degree of hydraulic connection between alluvial aquifers and the topmost units of the GAB thus appears likely in some areas in the subregion, connection with deeper, productive GAB aquifers may still be limited in these places by the hydraulic properties of shallower formations. Recent drilling reported by Barrett (2009), for example, indicates that the Gunnedah Formation is directly underlain by the Bungil Formation of the Surat Basin (correlated to the Drildool beds of the Coonamble Embayment in Figure 23) beneath the Lower Gwydir Alluvium. This unit is described by Radke et al. (2012) as consisting of fine-grained sandstones, siltstones and mudstones. While it is likely that there will be hydraulic connectivity between its upper units in contact with the Gunnedah Formation where they contain water, it is described as a ‘tight aquitard’ (confining bed) in the north of the Coonamble Embayment and probably effectively separates the alluvial systems from deeper GAB aquifers. Geological maps of the area variably indicate much of the alluvium in the west of the subregion to be underlain by the Rolling Downs Group, the Griman Creek Formation or the Blythesdale Group (that is understood to include the Bungil Formation, the Mooga Sandstone and the Orallo Formation).

A preliminary regional-scale desktop assessment of the potential for hydraulic connectivity between the GAB and underlying basins was undertaken as part of the Great Artesian Basin Water Resource Assessment (CSIRO, 2012). Connectivity can occur where aquifers, partial aquifers and leaky aquitards are juxtaposed below and above the base of the GAB (noting that faults may also act as conduits in places through otherwise low permeability formations). Figure 27 shows that hydraulic connectivity between the GAB and underlying formations is relatively poor across much of the subregion except in the south-east where aquifers at the base of the GAB are indicated to overlie partial aquifers of the Gunnedah Basin. In this location, the Surat Basin has a heightened potential connectivity with the underlying Gunnedah Basin strata.

Figure 28 shows the locations of springs and other groundwater-dependent ecosystems in the former Border Rivers-Gwydir Catchment Management Authority areas reported by the NSW Office of Water (2009) (note that the Gwydir subregion only occupies the western parts of the areas shown). These systems are areas of groundwater discharge. The main features in the western parts of the subregion are wetlands and waterholes. Some springs are present in the east in the area of the intake beds to the GAB. The NSW Government (2009) highlights that these are not mound springs (GAB-fed systems in the confined, artesian areas of the GAB) but rather ‘rejected recharge’ from the intake beds. 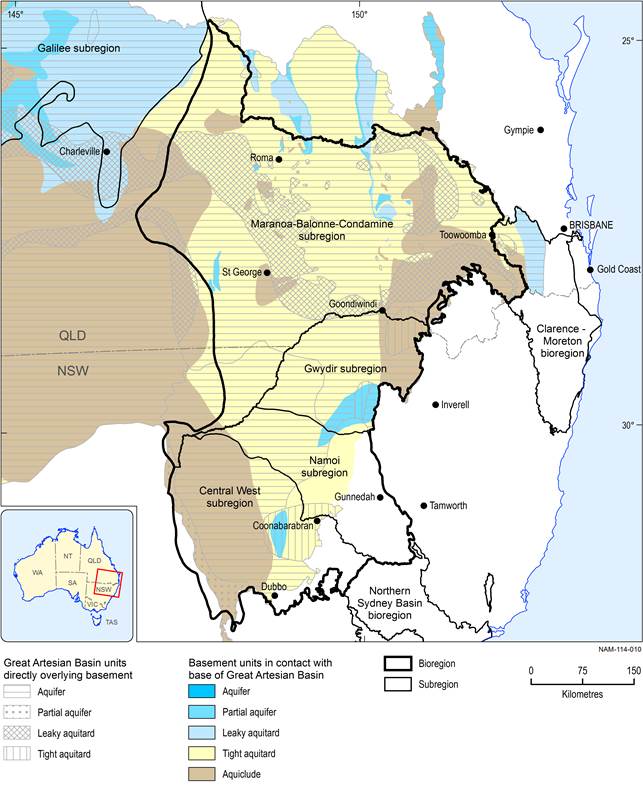 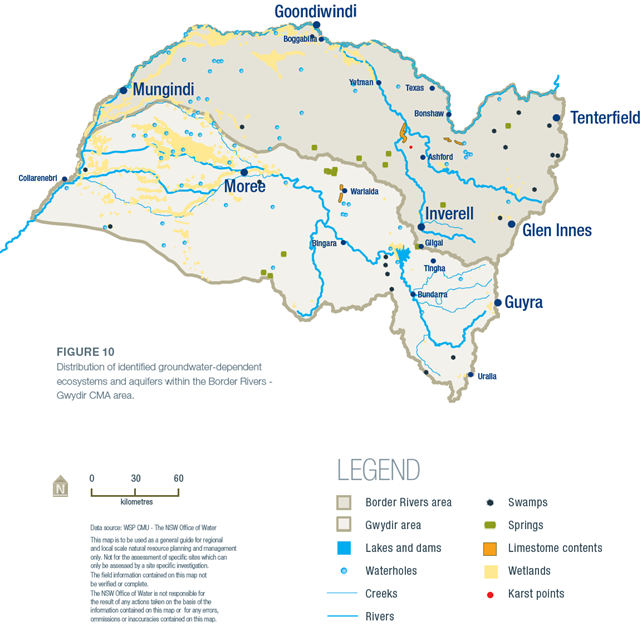