There are three coal-bearing sedimentary basins in the Gwydir subregion: the Bowen, Gunnedah and Surat basins (Figure 16); and these are the main focus of this section. The underlying basement rocks and overlying Cenozoic alluvial and volcanic sequences are not discussed in detail here (refer to Section 1.1.4 for information on the hydrogeology of the Cenozoic sequences).

The Bowen Basin began to form during the Late Carboniferous and Early Permian with tectonic extension and subsidence. Prolonged sedimentation into the Middle Triassic and sporadic volcanic activity bound the basin before the deposition of sediments ceased in the Late Triassic. The Gunnedah Basin is part of the broader Permian-Triassic Bowen-Gunnedah-Sydney depositional system and consequently formed from similar large-scale basin evolutionary processes as the Bowen Basin. Regionally significant volcanism in the Early Permian formed a 2 to 2.5 km thick volcanic sequence which marks the basal part of the Gunnedah Basin. Passive thermal subsidence followed this phase, marked by a period of uniform sedimentation across the basin and deposition of up to 1 km thick of compositionally varied sedimentary rocks. After a time of non-deposition (approximately 30 million years) the Surat Basin formed above most of the Bowen and Gunnedah basins during a period of steady subsidence. A compressional system caused fault reactivation and volcanic activity within the basin to occur before uplift in the Middle Cretaceous halted the formation of the Surat Basin.

The sedimentary infill of all three basins consists mostly of sandstone, siltstone, claystone, coal and volcanic deposits. Coal is mined extensively from other areas of the Bowen and Surat basins, although there are no coal mines in the Gwydir subregion. All three basins are also prospective for coal seam gas (CSG), although there is currently no CSG production within the subregion. 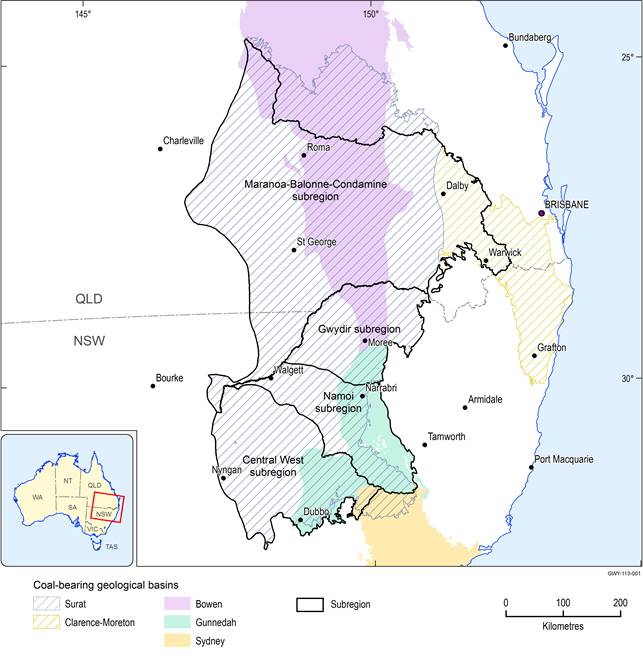 Figure 16 Location of the Gwydir subregion within the Northern Inland Catchments bioregion and its relation to the geological Surat, Bowen and Gunnedah basins