Within these geological environments, Nicholson et al. (2012) reported the work of Smith and Blair (2002) which identified the three-dimensional groundwater flow systems on Figure 20 and Figure 21 for salinity management purposes. These are described briefly below. Sinclair Knight Merz (SKM, 2004) undertook further work on flow system characterisation in the area in 2004 and 2010. However, while the 2004 systems they present are similar to Smith and Blair’s, the 2010 work (referenced in Border Rivers-Gwydir CMA, 2013) was not available at the time of writing. Figure 22 shows how current groundwater management areas of the Basin Plan 2012 (made under the Water Act 2007) for the Murray–Darling Basin (MDB), relate to these groundwater flow systems (groundwater management is discussed in detail in Section 1.1.4.4).

The alluvial aquifers of the Namoi (locally present in the south of the Gwydir subregion), Gwydir and Border Rivers systems (and antecedent systems) are the main groundwater sources for irrigation, stock, domestic and town supply within the subregion. They are associated with a broad area of alluvial deposits in the west of the subregion that are typically divided into the deeper Gunnedah Formation (the fluvio-lacustrine, semi-confined, major resource aquifer) which is everywhere overlain by the more extensive, finer grained, unconfined Narrabri Formation (Barnett et al., 2004; MDBA, 2012a). These formations are also recognised in the narrower valley alluvium of the Dumaresq and Macintyre rivers further east of this area (Figure 22). The division of the alluvial deposits in the Gwydir subregion into the Narrabri and Gunnedah formations is not universally accepted (e.g. Carr and Kelly, 2010), however, for the purposes of this report, they will be referred to as the Narrabri and Gunnedah formations. While not identified in other parts of the subregion, the productive Cubbaroo Formation is present beneath the Gunnedah Formation at the base of the alluvial sequence in the deep Namoi paleochannel in the south (see Section 1.1.4.2).

Carr and Kelly (2010) indicate that the measured thickness of alluvium increases from east to west in the subregion, with a maximum thickness of about 100 m but typically in the range 40 to 60 m. The Narrabri Formation ranges in thickness from 10 to 30 m and the Gunnedah Formation from 35 to 80 m (Barrett, 2009). In Figure 20, the alluvial deposits of the Gunnedah and Narrabri formations are split into several groundwater flow systems including the Western Plains (regional flow system forming the main groundwater resource), the Upper Narrabri Formation (local flow system in shallow deposits with very high salinity) and Dumaresq River.

The Croppa Creek flow system (local flows in near-surface deposits with marginal to saline groundwater) is included in the extent of the Gunnedah and Narrabri subsystems by Barnett et al. (2004). However, this area is shown on geological maps to consist of colluvium rather than alluvium. Since it appears somewhat distinct from the surface Narrabri Formation, it may be more appropriately allocated to a separate system.

The basaltic lavas of the New England Tablelands (Central Province Volcanics) in the east of the subregion and Nandewar Volcanic Field (hawaiite, trachyandesite, tristanite, trachyte and tuff (Stroud and Brown, 1998)) in the south-east were formed from volcanic eruptions during the Paleogene and Neogene and locally intrude and overlie the Surat and Gunnedah-Bowen basin strata. Groundwater is anticipated to occur in local flow systems, and be relatively fresh. However, these systems are not extensive in the subregion, although they might support local small-volume users.

The Surat Basin of the GAB occurs within a region of about 300,000 km2 of south-eastern Queensland and north-central NSW (CSIRO, 2012). Within the Gwydir subregion, it directly overlies the Gunnedah-Bowen Basin in the east of the subregion, the New England Fold Belt in the north-east and the Lachlan Fold Belt in the west. The Surat Basin strata, within the subregion, occupy the Coonamble Embayment component of the GAB, and range in age from Late Triassic to Early Cretaceous (Ransley and Smerdon, 2012). Whereas rocks of the Surat Basin are exposed at surface in the east of the subregion, they are covered by Cenozoic sediments in the west.

The top of the Surat Basin in the Coonamble Embayment is defined by the Drildool beds between Narromine and Warren, and by Rolling Downs Group (probably the Griman Creek Formation) north of Warren (Kellett et al., 2012; Burton, 2011). In the east of the subregion, progressively older (stratigraphically lower) units of the Surat Basin outcrop and dip to the west. The basal unit of the Surat Basin in the Coonamble Embayment is the Purlawaugh Formation which is underlain by the Early Jurassic Garrawilla Volcanics (Radke et al., 2012). The Surat Basin contains a sequence of interlayered aquifers and aquitards, with the main aquifer in the Gwydir subregion being within the Pilliga Sandstone. 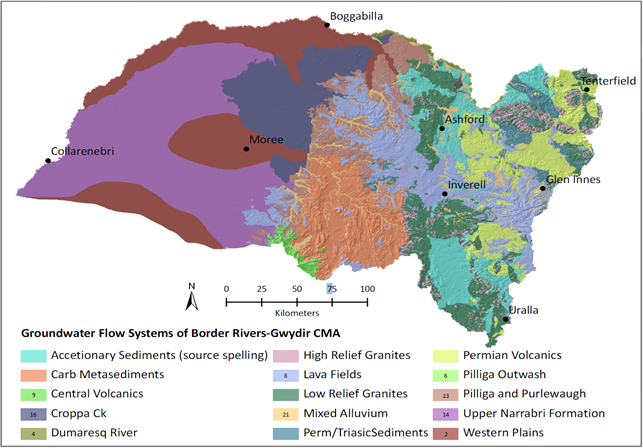 The Gunnedah and Bowen basins are part of an approximately 1700 km long depositional basin system consisting of the Sydney (south), Gunnedah (central) and Bowen (north) basins (Othman, 2003). The Gunnedah Basin is present in the south of the subregion and gives way to the Bowen Basin in the north (see Figure 16). The boundary between the two basins is considered to be in the general area of Moree, associated with basement/structural highs. Both basins directly overlie fractured rocks of the Lachlan Fold Belt. They are covered by Surat Basin sediments throughout most of the subregion although the groundwater management area map in Green et al. (2011a) indicates that the Gunnedah Basin sediments outcrop in a very small area in the south-east.

The Gunnedah Basin contains up to 1200 m of marine and non-marine Permian and Triassic sediments within which coal-bearing strata of the Black Jack Formation and the Maules Creek Formation occur (Tadros, 1995). The main Bowen Basin depocentres are the western Denison Trough and the eastern Taroom Trough (Othman, 2003). Only the Taroom Trough extends into the Gwydir subregion. While it reportedly contains over 10,000 m of sediment in Queensland, it thins to the south so that about 600 m of sediment is present by around latitude 28 S (north of the NSW border). It is reportedly poorly studied in NSW (Totterdell et al., 2009) although attempts have been made at stratigraphic correlation between the basins. The hydrogeology of the Gunnedah-Bowen Basin is poorly explored in the literature in the subregion where development appears limited due to the presence of shallow productive groundwater systems. 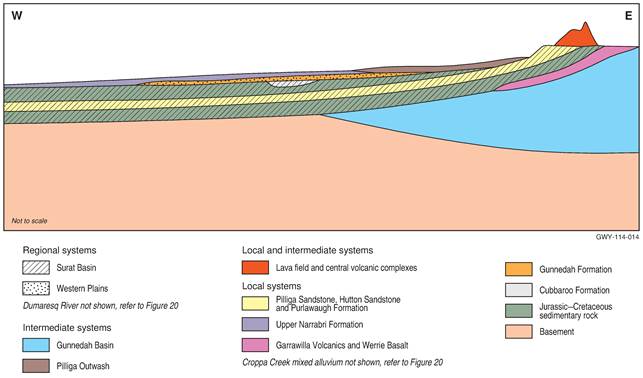 Source data: informed by cross-section presented in Smith and Blair (2002) 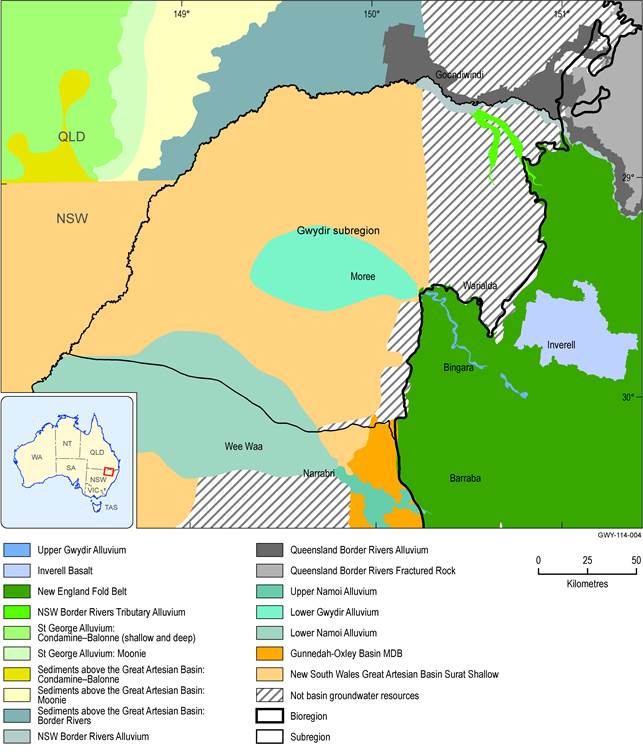 Figure 22 Groundwater sustainable diversion limit resource units for the Basin Plan 2012, made under the Water Act 2007

The intake beds of the Great Artesian Basin are not managed under the Basin Plan and are shown as ‘Not basin groundwater sources’ in the figure. 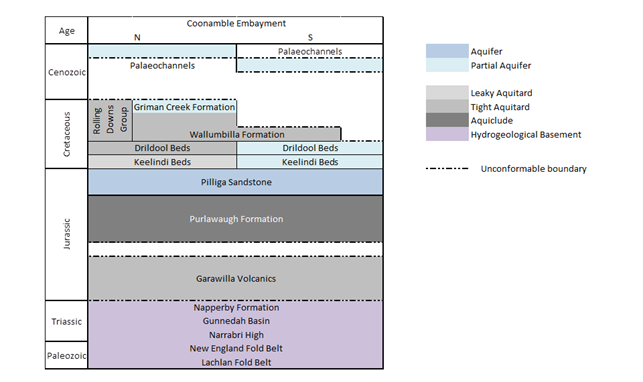 The NSW Government also undertakes data assessment to support local planning requirements and water resource sharing plans for priority groundwater systems such as the Lower Gwydir Groundwater Source (Barrett, 2009) and the Lower Namoi Groundwater Source (Smithson, 2009). Data collection and assessment are also undertaken to support strategies such as the Great Artesian Basin Sustainability Initiative and by industries to meet the requirements of individual development proposals and operational conditions.

In the Lower Gwydir Alluvium (see Figure 25), groundwater level monitoring commenced in the 1970s, with additional sites established up until 2008 (19 new monitoring sites were drilled and installed in a 2007 to 2008 drilling programme). The monitoring network currently includes 65 monitoring bore locations (Barrett, 2009). Groundwater level monitoring is undertaken at a variety of time intervals, and is mostly done manually. Barrett (2009) indicates that there is little in the way of long-term water quality information for the Lower Gwydir Alluvium, although state observation bores were sampled at the time of installation.

Groundwater level monitoring in the Lower Namoi Alluvium (see Figure 25) commenced in the late 1960s and has been performed at 256 locations until the present (Smithson, 2009). Most of these monitoring locations fall within the Namoi river basin rather than the Gwydir subregion. Groundwater level monitoring is undertaken at a variety of time intervals, and is mostly done manually. The collection of groundwater quality data in the Lower Namoi Alluvium has tended to be infrequent and irregular, with limited information available in public state databases. Although groundwater salinity is the main measure of groundwater quality that has been collected in the Namoi subregion (Kelly et al., 2007), there are limited long-term and/or periodic salinity monitoring records available.

The NSW Office of Water (2009a) state that over 500 artesian bores in the NSW portion of the GAB groundwater source have been monitored for pressure, flow, temperature and groundwater quality. However, monitoring has been discontinued in many bores as they were decommissioned, became sub-artesian or were assessed as unsuitable for monitoring due to the poor condition of the bore head. The NSW Office of Water (2009a) indicated that 65 of these GAB bores were being monitored at least once every two years. Of these, a total of 24 are situated in the Gwydir subregion – 14 are situated in the NSW Border Rivers river basin (including some in the intake beds) and ten are situated in the Gwydir river basin (NSW Office of Water, 2009b). Of these 24 bores, 11 were being fitted with telemetered data loggers for real-time monitoring under the GAB monitoring network programme. State monitoring bore networks are also located in the NSW Border Rivers Alluvium. However, a literature search did not identify any publicly available summary of the current status of monitoring in this area as undertaken in the Groundwater Status Reports for the Lower Namoi and Lower Gwydir alluvium. 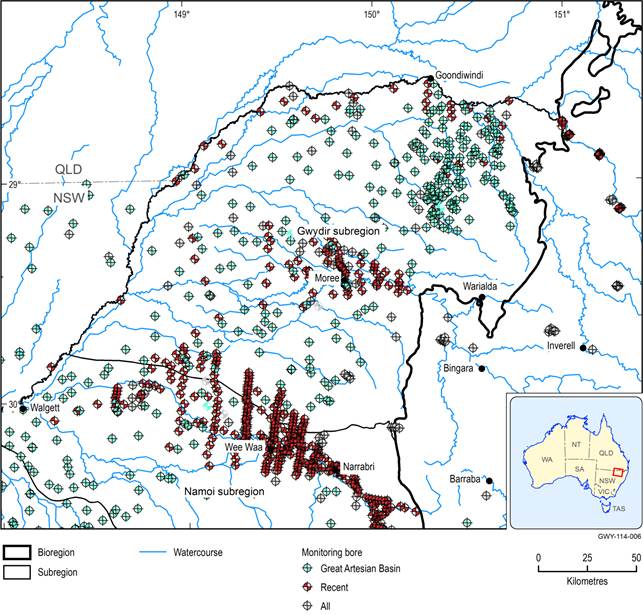