The Narrabri North Mine, Stage 2 Longwall Project site covers an area of approximately 5201 ha. Approval for Stage 1 of the Narrabri Coal Mine was granted on November 2007, permitting the mining and rail transportation of up to 2.5 Mt/year of run-of-mine (ROM) coal for a period of 21 years. Site works commenced in April 2008. An application for Stage 2 was approved in July 2010, allowing for an annual production of up to 8 Mt/year run-of-mine (ROM) coal for 21 years, the approved production rate was increased to 11 Mt/year in 2015.

Water use on-site is primarily for dust suppression, mining operations (e.g. coal handling and preparation plant and longwall) and potable supply. Water collected on-site is retained or reused where possible. Modelled water use requirements for the mine during its operational life are 346 ML in year 2 (peak water demand) and 323 ML in year 18. Water use is relatively uniform from year 3 to year 18, and year 18 has predicted peak groundwater dewatering volume (WRM Water and Environment, 2011).

Early in the mine life it is expected that there will be insufficient runoff from the mine site to meet water demands, and a water licence to extract water from the Namoi River will augment supplies during this period (WRM Water and Environment, 2011). Later in the mine life, after approximately years 3 to 5, groundwater inflows are expected to increase and exceed the mine site water demands resulting in an excess of water.

Water for dust suppression is sourced from on-site water harvesting and mine dewatering. A water treatment plant (WTP) uses reverse osmosis to produce all potable water used on the site. The WTP is supplied from Dam D, which is fed by water pumped from the Namoi River. Water from Dam D can also be filtered for use within the mine to supplement supply when mine dewatering does not produce sufficient water for operations. The water captured in storage dams SD1-SD5 is also transferred to Dam D, where required.

The Narrabri Coal Mine lies within the Namoi river basin and is drained by the ephemeral Kurrajong Creek and Pine Creek, and their tributaries.

The total storage capacity of the farm dams located within the mine site prior to commencement of mining was estimated at 121 ML, and the existing and proposed sediment dams is expected to be 237 ML. The maximum harvestable right dam capacity for the mine site is approximately 268 ML (WRM Water and Environment, 2009).

A detailed water balance model of the mine was developed to forecast the behavior of the mine water management system under a range of climate conditions (WRM Water and Environment, 2015). The water balance indicated that sufficient capacity was provided by the proposed brine storage ponds to account for the upper estimate of groundwater inflow. Evaporator spray systems on evaporation ponds will be used to reduce the volume of water stored on-site. The water stored in these dams may include mine water pumped out from the underground operations or potentially contaminated runoff from the stockpiling and crushing/sizing area. Water will be drawn from these dams for operational purposes, depending on the water quality requirements of the operations.

The surface water management system includes a water conditioning plant to treat saline groundwater, using reverse osmosis, to a sufficient quality for mine site use, discharge to the Namoi River and potentially for use offsite.

Concentrated brine by-product of the water conditioning plant will be stored and evaporated in lined brine storage ponds on the pit top area without release to the environment. At the completion of the operation, it is predicted that up to 2000 ML of concentrated brine solution will remain and will be re-injected into the underground void (WRM Water and Environment 2009).

The mine is licensed to discharge water from dams SD2, SD4 and SD5, when water quality meets the limits set in the licence. Modelling of the site gives a predicted percentage of years of uncontrolled discharge of 31.5%, with a median volume of 2 ML/year estimated by the water balance model (URS Australia Pty Ltd, 2013).

An underground pipe to the Namoi River enables extraction of additional water from the Namoi River or discharge of surplus treated water to the river. Off-site releases of treated water from the conditioning plant are expected to commence by about 2019. The median groundwater model output indicates that the release of treated water will peak in 2023 at 283 ML/year for median groundwater inflows. These estimates are lower than earlier predictions (WRM Water and Environment 2009), as the observed mine water inflows during the mine operations to date have been used to update the groundwater model calibration (WRM Water and Environment, 2015).

Groundwater is extracted through the underground mine workings and via the gas drainage wells across the mine site. Table 16 gives the modelled volumes of inflow from the contributing groundwater sources. It is not possible to directly measure the volume of groundwater flowing into the workings, so the volume of produced water has been estimated considering inputs and outputs to the underground system. Estimates of the produced volume of groundwater, for the period December 2011 to May 2015, were compared to predicted volumes in WRM Water and Environment (2015). It was found that produced volumes have been equal to or less than the model predictions since August 2012. Produced volumes are increasing, consistent with the modelled values, and were around 1 ML/day (365 ML/year) in early 2015. Hydrosimulations (2015) modelled the groundwater impacts of the Narrabri North Mine. Figure 46 shows predicted groundwater inflows to the mine. 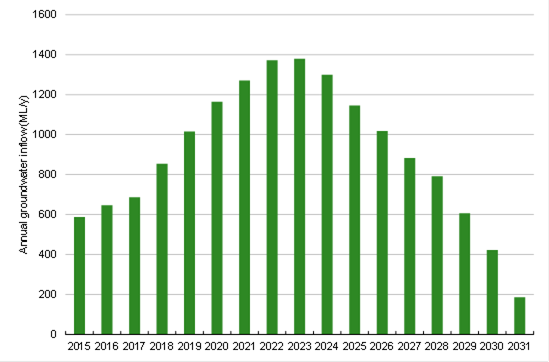 Table 16 Source of groundwater ‘extracted’ by Narrabri North Mine

During the longwall mining process fracturing and resultant subsidence occurs above the longwall panels. The predicted height of continuous or connected fracturing varies from around 45 to 200 m below ground level in the shallowest to deepest parts of the mine. During groundwater modelling for the mine for a base case Aquaterra (2009) undertook three uncertainty scenarios using adjusted hydraulic parameters to investigate the effects of fracturing. For the uncertainty scenarios, the modelling shows that if connected fracturing extends into the overlying Garrawilla Volcanics, a slight increase in the peak inflow rate, to 1423 ML/year, may occur. If vertical permeabilities are increased by a greater amount than anticipated in the subsidence zones above the longwall goafs, inflow rates peaking at up to 1889 ML/year may occur, though this is considered unlikely. If some of the upper fracture zones were to settle and result in lower hydraulic conductivities, then groundwater inflows are estimated to peak around 1168 ML/year.

The impacts of underground mining on river baseflows have been predicted (Aquaterra, 2009). The impacts to baseflows can occur when the drawdown due to the mine extends into the alluvium. The modelling shows the most impacted river reach is the closest section of the Namoi River, to the east of the mine site. Baseflow in this reach is predicted to reduce by a maximum of around 80 ML/year (0.22 ML/day) (years 23–24), which is 2% of the calculated baseflow contribution of this reach (3760 ML/day) (Aquaterra, 2009). Post mining the baseflows are predicted to recover to levels equal to pre-mining following the 100 years of recovery. Hydrosimulations (2015) reported that the proposed mine modification would result in a negligible difference in impact to baseflow.