As described in companion submethodology M09 (as listed in Table 1) for propagating uncertainty through models (Peeters et al., 2016) and in Section 2.6.2.1, the parameter space is constrained by the observations relevant to the predictions through a Markov chain Monte Carlo sampling using the Approximate Bayesian Computation (ABC) methodology (Beaumont et al., 2002; Vrugt and Sadegh, 2013). As in any Bayesian methodology, a set of prior parameter distributions needs to be defined that encapsulates the current information and knowledge, including correlation or covariance of parameters. This is described under Section 2.6.2.8.1.1 ‘Prior parameter distributions’.

The parameterisation of the groundwater model, using multipliers of spatially variable properties and empirical relationships between depth and hydraulic conductivity, makes it very difficult to describe the distributions of the parameters directly from observations and measurements of the hydraulic properties. The Assessment team created the prior parameter distributions (blue lines in Figure 36) based on the available information in companion product 2.1-2.2 for the Clarence‑Moreton bioregion (Raiber et al., 2016a) and the initial model runs. The prior distributions are parameterised as a multivariate normal distribution with the mean of each parameter centred on the initial value listed in Table 8 in Section 2.6.2.7. The standard deviation is chosen such that more than 99% of the probability mass is within the range identified for the parameter. Some of the recharge parameters have an initial value very close to the lower boundary. For those the mean of the prior distribution is shifted to a higher value.

the covariance between parameters A and B, and

the variance of parameters A and B, respectively. The covariance is purposefully chosen to result in a weak correlation between the variables. This allows a wide range of values to be chosen while reducing the likelihood of low and high values of hydraulic conductivity and storage occurring together. 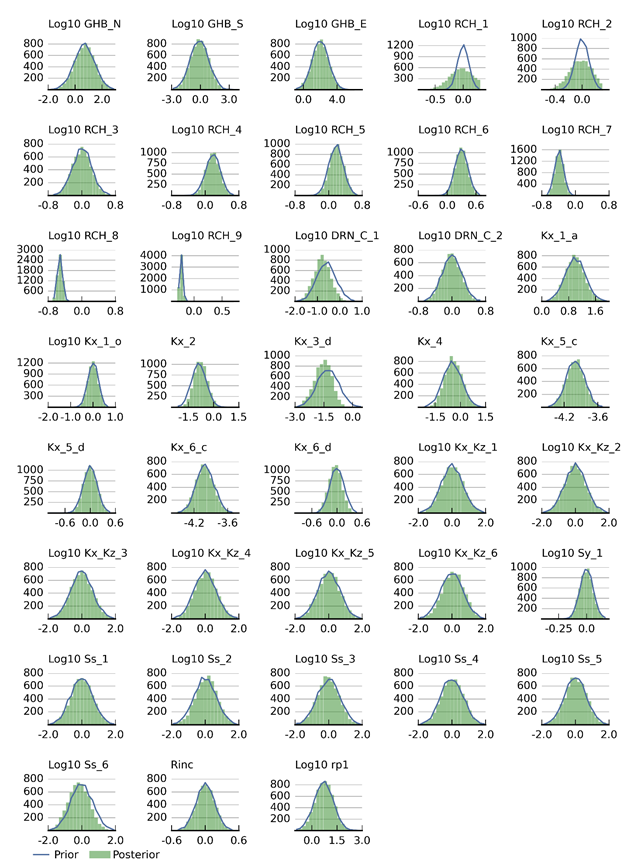 Posterior parameter distributions as obtained by the general objective function; Total sample size is 10,000; Refer to Table 4 in Section 2.6.2.4 for a detailed description and units of parameters 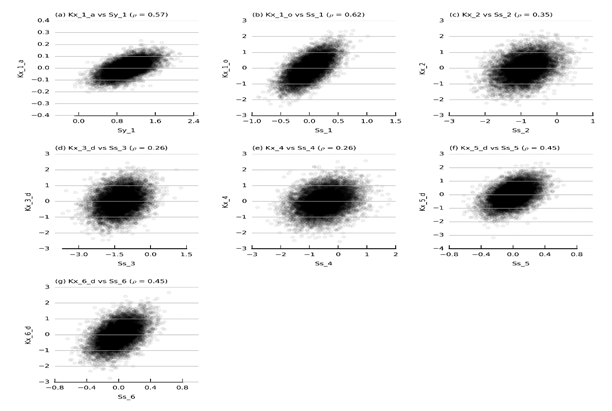 For the Clarence‑Moreton bioregion, three types of observations are available to constrain the parameters for the predictions:

Additionally, there are rules that can further constrain the parameter values based on the conceptual understanding and data analysis (see companion product 2.1-2.2 (Raiber et al., 2016a) and companion product 2.3 (Raiber et al., 2016b) for the Clarence‑Moreton bioregion), such as the condition that the hydraulic conductivity of layer 4 (Kangaroo Creek Sandstone) needs to be larger than the hydraulic conductivity of layer 3 (Bungawalbin Member).

The objective function for predicted change in groundwater level due to the additional coal resource development in layers 2 to 6 and changes in surface water – groundwater flux consist of four acceptance criteria:

During the Monte Carlo simulation, a random sample of the prior parameter distribution is generated and evaluated with the two emulators. If all four acceptance criteria are satisfied, then the sample is accepted into the posterior parameter distribution. If not, then the sample is rejected. This process is repeated until a predefined number (in this case 10,000) of samples is accepted.

is the criterion for prediction j,

is the ith observed groundwater level, and

is the simulated equivalent to this observation.

is the distance (in km) of observation

to the nearest blue line network while

is the distance (in km) between observation

controls the distance at which the weight of observation

drops to zero. To account for transient observations, the weights are divided by

, the number of observations at the observation location. The tanh function allows the weight of an observation to decrease almost linearly with distance and to gradually become zero at a distance of approximately

. This is illustrated in Figure 38 for different values of 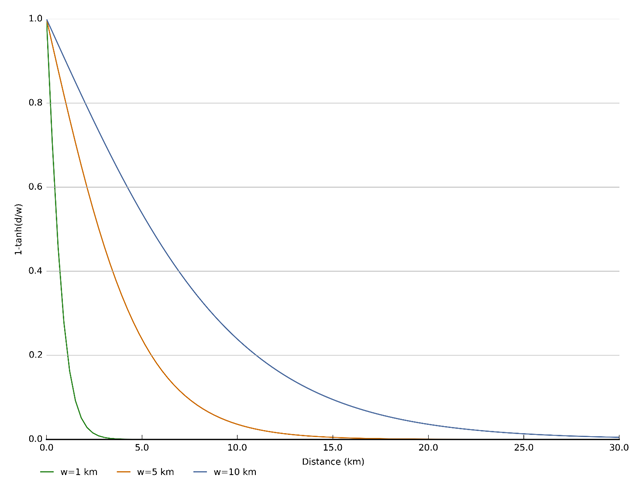 is set equal to 5 km, which means that an observation has a weight of zero if the distance between the prediction and the observation is more than 15 km. The choice of this value is a pragmatic decision on behalf of the Assessment team. Ideally, the distance weighting function is chosen based on a spatial analysis of the available groundwater level observations. The sparsity of observations, especially transient observations, did not allow such an analysis. At a distance of 15 km the Assessment team judged that it is very likely that the groundwater system is affected by different stresses (recharge, surface water interaction) and has different hydraulic properties.

, the upper limit, for each prediction is defined as:

This means that any parameter combination that results in an average difference between observed and simulated groundwater level equal or less than 10 m is deemed acceptable. While this might be considered as a weak constraint, in a traditional calibration this would correspond to a normalised root mean squared error of 5% as the range of groundwater level observations spans about 180 m (Bioregional Assessment Programme, Dataset 1). 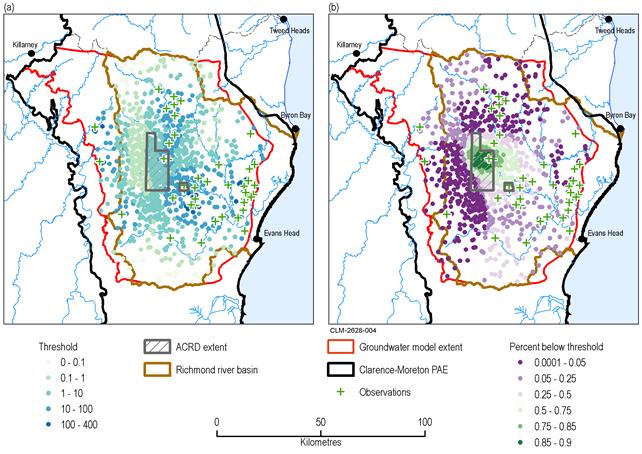 Figure 39a shows the value of the threshold value for each individual prediction in layer 1, calculated with Equation 6. The value of the threshold as such is not that important, but high values indicate that a prediction is within the zone of influence of one or more observations. This means that the parameter distribution used for that prediction potentially can be constrained by groundwater level observations. Conversely, low values close to zero indicate that a prediction is far removed from any observation and therefore has a low potential to be constrained.

Figure 39b shows the fraction of successful runs of the design of experiment that meet the groundwater level acceptance criterion. High values, in excess of 0.8, indicate that a majority of the parameter combinations evaluated in the design of experiment result in groundwater level predictions that agree with the observations in that region (within the specified acceptable range). This means that the simulated groundwater levels in a region with high values of this acceptance rate are not very sensitive to the parameter values. This also means that the observations have limited potential to constrain the parameters in these regions and thus have limited potential to constrain the predictions. In other words, a good fit between modelled and simulated values in these areas does not guarantee reliable predictions.

In the groundwater model for the Clarence‑Moreton bioregion, the central region with high acceptance rates is probably due to a few observations that are close to a surface water boundary. The simulated groundwater levels in that region are mostly affected by the boundary conditions, rather than the parameter values.

Very low acceptance rates on the other hand, indicate that only a very limited number of parameter combinations result in simulated groundwater levels at the observation location that correspond to the observed values. As the parameter bounds in the design of experiment are deliberately chosen to be wide, low acceptance values indicate localised conceptual shortcomings of the model because it is not possible to get an acceptable correspondence between observed and simulated values. In some extreme cases, the acceptance rate is equal to zero, which occurs in three ellipse-shaped regions in the model. These are predictions within the overlapping zones of influence of two observation locations for which the simulated values cannot simultaneously agree with both observed groundwater levels. While this can be an indication of the shortcomings of the spatially uniform parameter multipliers within a layer, it is also likely that this is due to the boundary conditions, the local conceptualisation or even artefacts or errors in the observation database.

Figure 39b can be used as a proxy of the conceptual model uncertainty of the groundwater model. Very high acceptance rates indicate insensitivity to parameter values although the groundwater level predictions agree with observations. Low values, on the other hand, indicate regions of the model where it is unlikely to make groundwater level predictions that match the observations and where it is likely that the conceptualisation is locally inadequate. Three such areas can be identified in Figure 39b (black dots): north of the CSG development area, the western edge of the groundwater model and the eastern edge of the model closest to Byron Bay. While the extent and shape of these regions is determined by the weighting function, the presence of these zones indicates that for some sets of observations the model is not able to simultaneously match the observations within the prescribed error threshold. 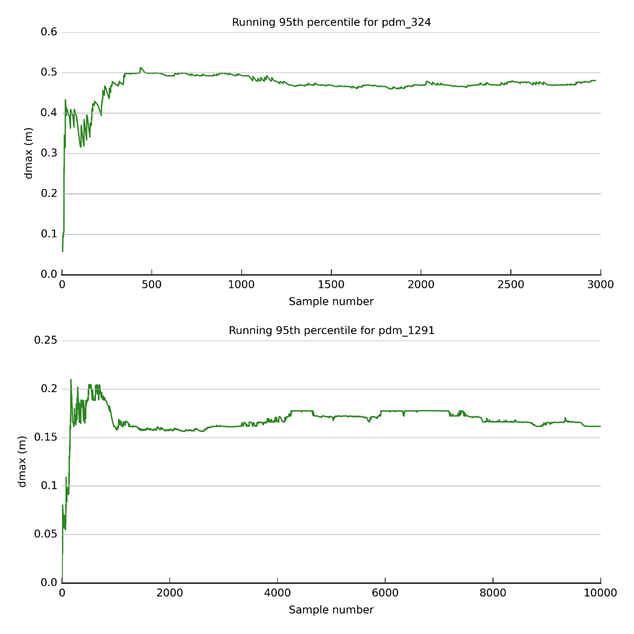 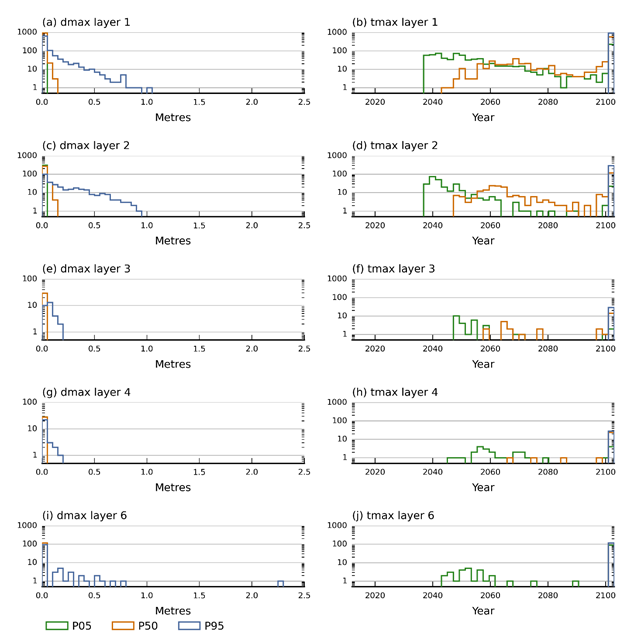 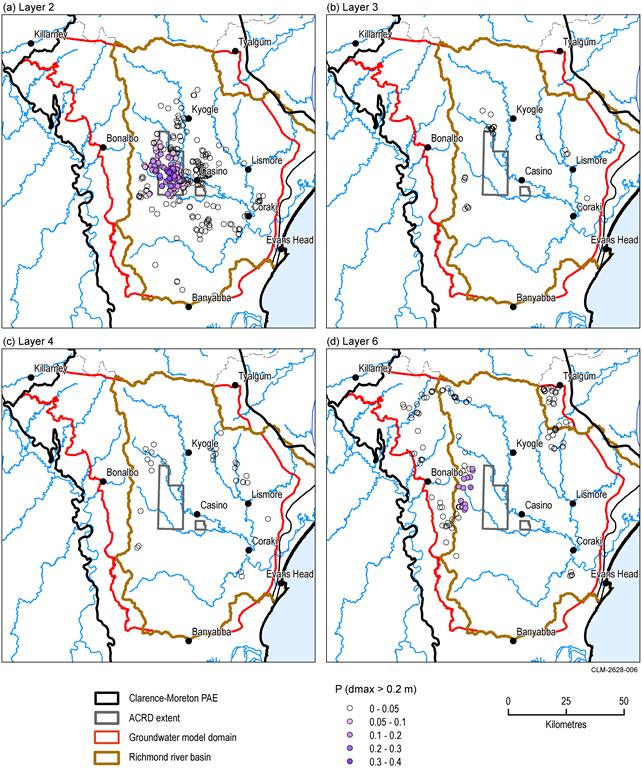 Figure 43 shows that the area where the probability of exceeding 20 cm additional drawdown exceeds 0.05 extends at most 10 km west of the CSG development area. The map also shows the mitigating effect of the major rivers on additional drawdown. 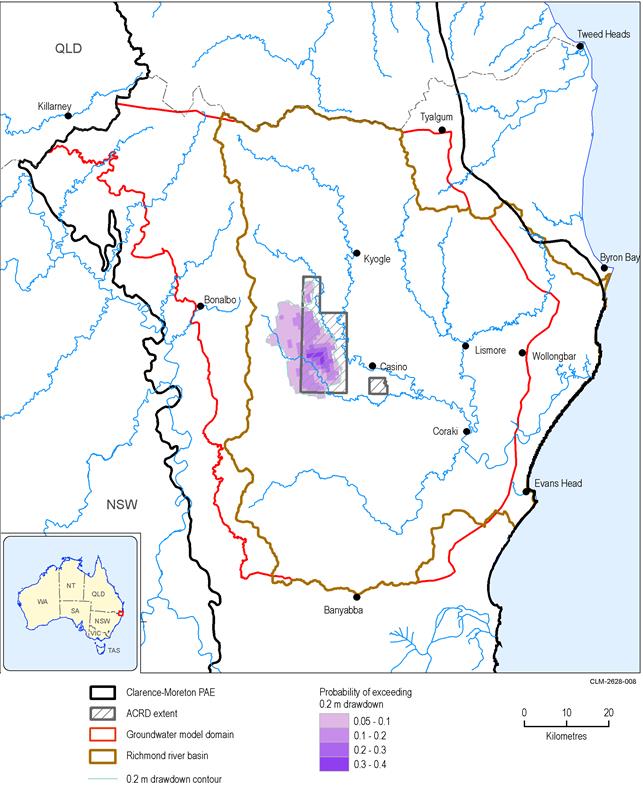 These results are generally comparable with the findings of the groundwater modelling carried out for the Metgasco IES (Parsons Brinckerhoff, 2013). The BA modelling indicates a non-negligible probability of exceeding 20 cm drawdown beyond the additional coal resource development area (Figure 42a), especially to the west. The Metgasco model shows very limited impact outside the additional coal resource development area in the watertable aquifer. The Metgasco model predicts that the drawdown due to the CSG abstraction is generally less than 0.2 m in layer 1 and the Piora Member (layer 2). The 95th percentile of additional drawdown predicted by the bioregional assessment (BA) model at any model nodes in layer 1 or layer 2 is not in excess of 0.48 m. While there are no model nodes in the Walloon Coal Measures within the additional coal resource development area, the relatively small changes in the Walloon Coal Measures at the existing model nodes agree with the rapid decline of drawdown due to the low hydraulic conductivity in the Walloon Coal Measures simulated in Parsons Brinckerhoff (2013).