The perennial reaches of the Richmond River network were explicitly simulated using the MODFLOW River package (Harbaugh, 2005). Long-term average river stages for the steady-state model were interpolated from measurements obtained at 12 gauge sites located within the model domain (Figure 14). Transient river stages at the 12 gauges were derived from rating curves based on historical records and the runoff component of the AWRA-L outputs. Figure 15 demonstrates an example of the derived river stage time series at gauge 203004 for the period between 1983 and 2102.

Another key controlling parameter is the riverbed conductance, which is defined as follows:

The initial values of the riverbed conductance were adjusted through 22 pilot points during the sensitivity and uncertainty analysis (Figure 16). Twelve pilot points were placed at locations where gauges exist (Figure 14). Cross-sections of the stream at these locations were used to obtain reach-width information. Another 10 pilot points were placed where gauges are not available to provide an even coverage of the stream network in the groundwater model. Reach-width data for these locations were sourced from the hydrographic survey data by NSW Office of Environment and Heritage (2012).

Apart from the perennial streams that were explicitly simulated in the groundwater model, there were other surface water features such as local intermittent streams and swamps, which were considered to function as local discharge features (Raiber et al., 2016b); such features were lumped together and implicitly simulated using the MODFLOW Drain package. A drain boundary condition is assigned to each model grid cell in layer 1 with a drainage elevation equal to topography. The drainage conductance is set to 1 m2/day and allowed to vary through a multiplier (DRN_C2) in the uncertainty analysis. 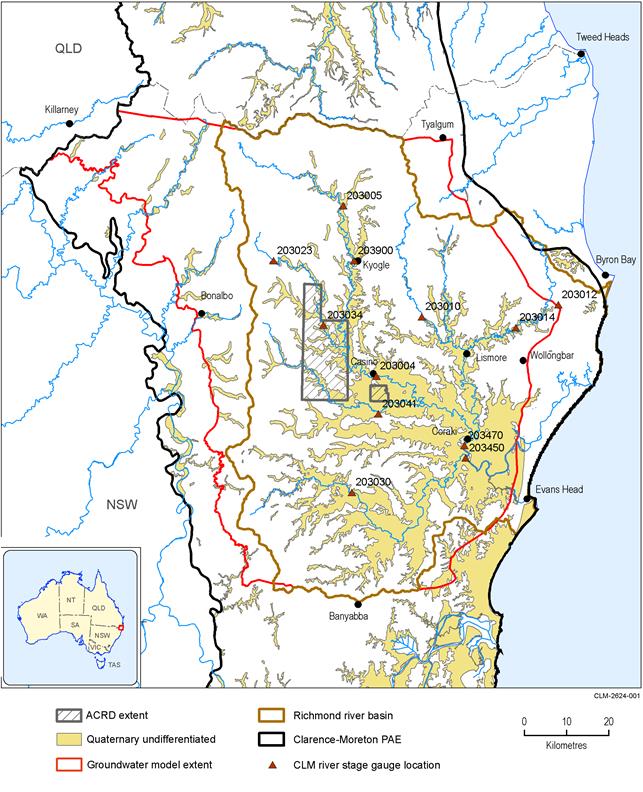 The river stage is referred to the local gauge reference elevation.