For the Clarence‑Moreton bioregion, three types of observations are available to constrain the parameters for the predictions:

Historical groundwater level records were organised into two groups to constrain the Clarence‑Moreton groundwater model. The first group comprised 188 records sourced from the National Groundwater Information System (NGIS) database (Bureau of Meteorology, Dataset 1), where standing water levels had been recorded as a component of the bore construction information (Figure 21). The second group comprised a total of 712 records in 30 bores between 1983 and 2013, sourced from the NSW Office of Water groundwater database (NSW Office of Water, Dataset 2). These bores are mainly situated in the Richmond River alluvium (Figure 21).

Standing water levels after bore construction are often not the most reliable observations. The observation dataset is filtered and only those observations are retained in the uncertainty analysis for which surveyed spatial coordinates are available and the ground level is obtained from a survey or digital elevation model. Only 43 bores had surveyed coordinates and ground level (Figure 21). These included the 30 bores with transient observations.

While the observations that were deemed not to be reliable are excluded from the formal uncertainty analysis, the entire dataset of head observations was used in the initial stages of model development to guide the initial head surface and parameterisation. 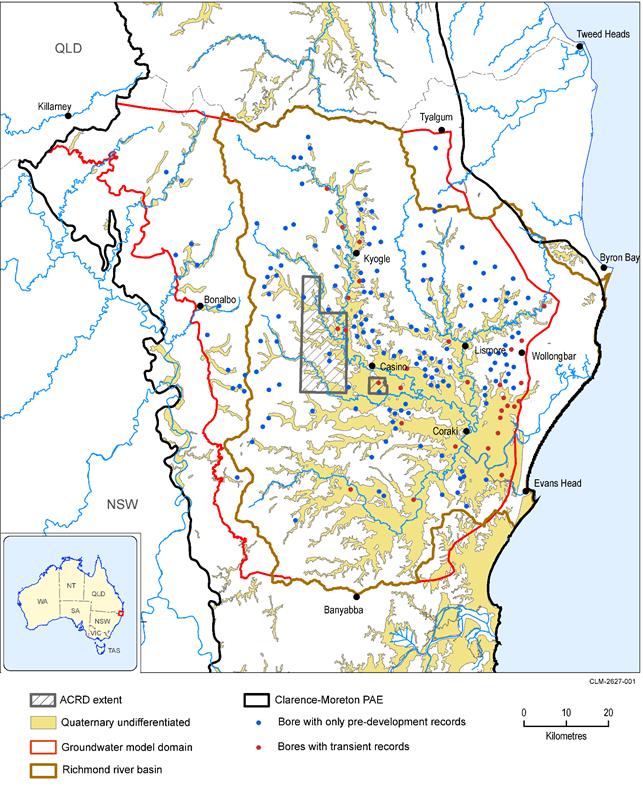 The second type of observation to constrain the groundwater model is the expected annual total water production during CSG production, as reported in Parsons Brinckerhoff (2013) shown in Figure 22. In the MODFLOW model, coal seam gas production is implemented as a drainage boundary condition. The volume of water that needs to be extracted to achieve the specified drawdown at the cells with a drainage boundary will therefore depend on the hydraulic parameters of the model. While it is by no means a goal of the bioregional assessment (BA) modelling to reproduce these values exactly, the simulated water extraction rates should be consistent with the estimates in Figure 22, especially since these are based on detailed local information and pilot production testing. 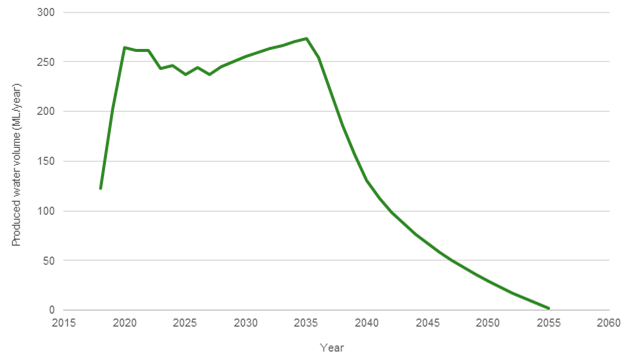 Source: As reported in Parsons Brinckerhoff (2013)

A third type of observation is the streamflow in the Richmond River between 1983 and 2012 at the Casino surface water model node (CLM_008). Figure 23 shows boxplots of monthly flow at this location between 1983 and 2012. It is apparent that September and October are the months with lowest streamflow. In these months it is therefore likely that a large component of streamflow is groundwater derived. The average surface water – groundwater flux in that reach is therefore unlikely to be higher than the average observed streamflow in September and October. 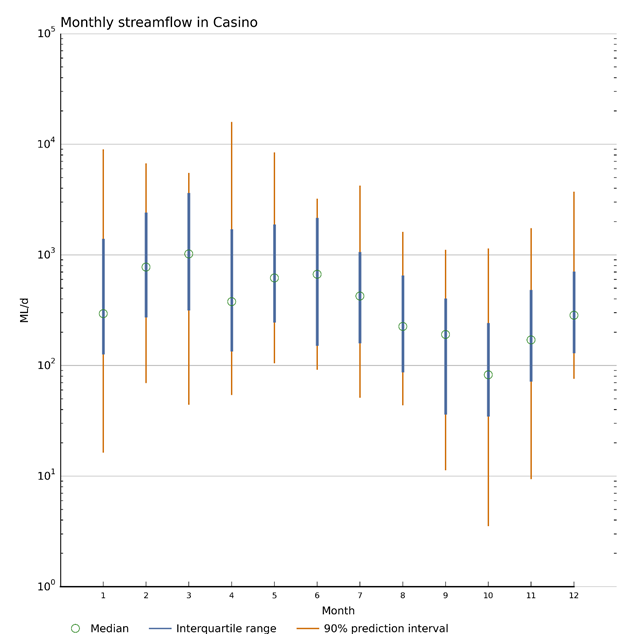