The West Casino Gas Project consists of two potential gas fields (one to the south and one to the west of Casino). There are 90 wells in the current development plan (Parsons Brinckerhoff, 2013) for the gas field west of Casino, which will be drilled into the Walloon Coal Measures to extract coal seam gas (CSG) over a period of 20 years starting in 2018. The gas field south of Casino corresponds to an area for which, as of July 2015, a pending petroleum production license application (PPLA 9) by Metgasco existed (NSW Trade and Investment, Dataset 1). As the number of wells was unconfirmed and PPLA 9 is partly located within the 2 km residential exclusion zone, it was assumed for the purpose of the model development that PPLA 9 would only be a small project with five wells (Raiber et al., 2016). Figure 17 shows the locations and activation years of the extraction wells.

To facilitate CSG extraction, the target coal seams are usually depressurised to a target water level; the MODFLOW Drain package was implemented in the Walloon Coal Measures (model layer 6) to achieve this target level. The target water level can vary depending on a number of parameters, such as gas saturation and hydraulic properties of the target coal seam and the surrounding hydrogeological units. Previous studies (APLNG, n.d.; Sydney Catchment Authority, 2012; Parsons Brinckerhoff, 2013) suggest that the target water level is approximately equivalent to 30 to 35 m above the top of the target coal seam. A water level of 35 m above the top of the Walloon Coal Measures was used as the target water level in the current model. Conductance in the MODFLOW Drain package was adjusted to match the predicted volumes of water produced in the development and to explore the uncertainty associated with water production rates. According to Metagasco’s preliminary report (Parsons Brinckerhoff, 2013), the CSG-producing wells penetrate to depths exceeding 500 m, targeting the Richmond Seam and the deeper coal seams. However, the coal seams were not explicitly represented in the groundwater model but were lumped into one hydrostratigraphic unit (layer 6) to reduce model execution time and also due to the lack of information about the internal structure of Walloon Coal Measures.

The dual-phase flow process near CSG wells was not modelled in the current project. Previous studies (Moore et al., 2013; Moore et al., 2015; Herckenrath et al., 2015) have shown the omitting of dual-phase flow overestimates drawdown impact, especially for prediction near CSG wells, depending on hydraulic properties, development plans and simulation time. For example, Moore et al. (2015) reported a drawdown overestimate of 15 m at a distance of 7 km from the well extraction centre at a simulation time of 20 years within the targeted coal seam formation in their model. Nevertheless, the single-phase model is deemed fit for purpose in accordance with the principle of conservatism at the current stage of the BA. If a negligible impact is generated by the single-phase model, then a dual-phase model will certainly provide negligible-impact prediction. If the single-phase model finds a large impact, then this may trigger a next step with a dual-phase model to get a more realistic impact prediction. 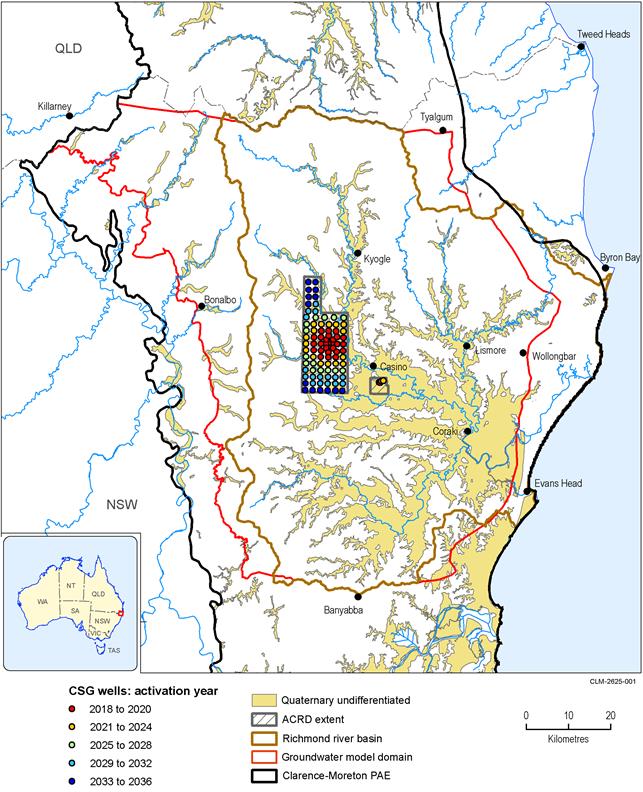