Arrow Energy Pty Ltd (2012) developed a groundwater model to investigate the potential impacts of water extraction on associated aquifers during its production testing of three wells in Authority to Prospect (ATP) 644 (Figure 7). The Groundwater Vistas interface was used to build the MODFLOW-2000 model (Harbaugh et al., 2000). This simple local-scale model comprises two hydrogeological units: the alluvial aquifer and the Walloon Coal Measures. These two units were divided into eight flat layers with uniform elevations in each layer. The total extracted volumes of water from the three numerical wells were approximately 0.69 ML, 0.55 ML and 0.54 ML over a period of nine months. The production test bores are located about 6 km to the north-west of Laravale.

The model, which covered an area of approximately 30 km2, was discretised into 80 rows and 80 columns. Grid sizes were refined to 10 m in the vicinity of the production test wells from 100 m along the model boundaries. A general-head boundary was applied to the uppermost layer of the model, whereas all other boundaries were considered to be impermeable. The hydraulic conductivity, specific storage and specific yield were kept uniform as homogeneity was assumed within the alluvial aquifer and Walloon Coal Measures. These parameters were calibrated to observed groundwater levels in the three production test bores over 224 days. The transient model includes a 224-day production test period and a 3-year water level recovery period.

Based on the calibrated optimal parameters, the modelling results suggested that the drawdown impacts within the unconfined alluvial aquifer were less than the bore trigger threshold (for unconfined aquifers) of 2 m. At the end of the production test, the impact zone where noticeable drawdowns occurred in the confined Walloon Coal Measures was restricted to a radius of about 550 m from the production test wells. However, these drawdowns were reduced to below the bore trigger threshold at the end of the 3-year recovery period. 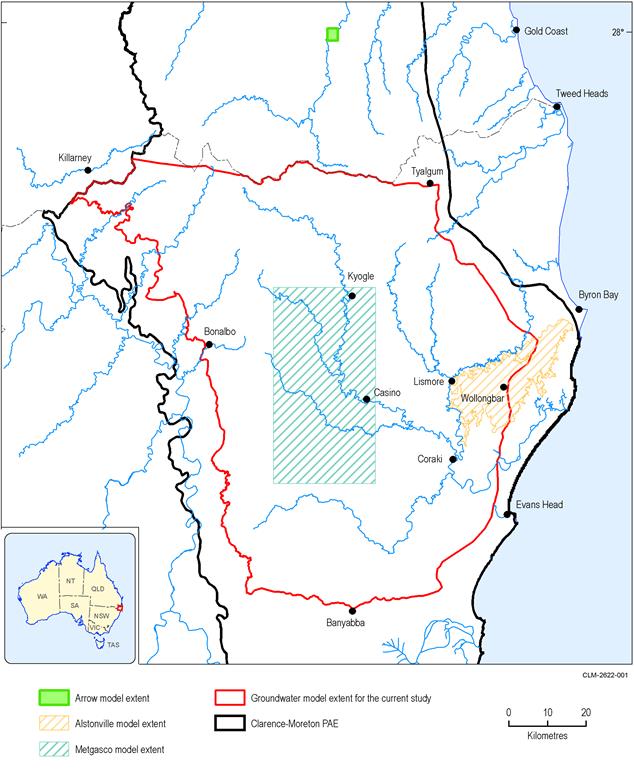 The predictive uncertainty associated with the predictions was addressed through a Monte Carlo simulation. The model was run with 100 randomly generated parameter realisations sampled from alluvial hydraulic conductivities that range from 0.01 to 1 m/day. The results showed that there is a 25% probability that the impact zone would extend to beyond 200 m from the production test bores, while 75% of the realisations showed that the impact zone would be limited to 50 m from the production test bores. The impact zone was defined as the area where drawdown is more than 5 m; this is the trigger threshold for consolidated aquifers specified in the Queensland Water Act 2000.