One of the key ways in which coal mines affect water resources is the direct impact of the mine footprint areas on detaining surface runoff and preventing its entry to the natural stream network. It is important, therefore, to know how much land surface area is intercepting natural surface runoff. This area is termed the footprint of the mine. For the purposes of bioregional assessments, the footprint includes the entire area disturbed by mine operations, pits, roads, spoil dumps, water storages and infrastructure. It may also include otherwise undisturbed parts of the landscape from which natural runoff is retained in reservoirs. The footprint does not include rehabilitated areas whose surface drainage is allowed to enter the natural drainage network. Nor does it include catchment areas upstream of drainage channels that divert water around a mine site but do not retain it. 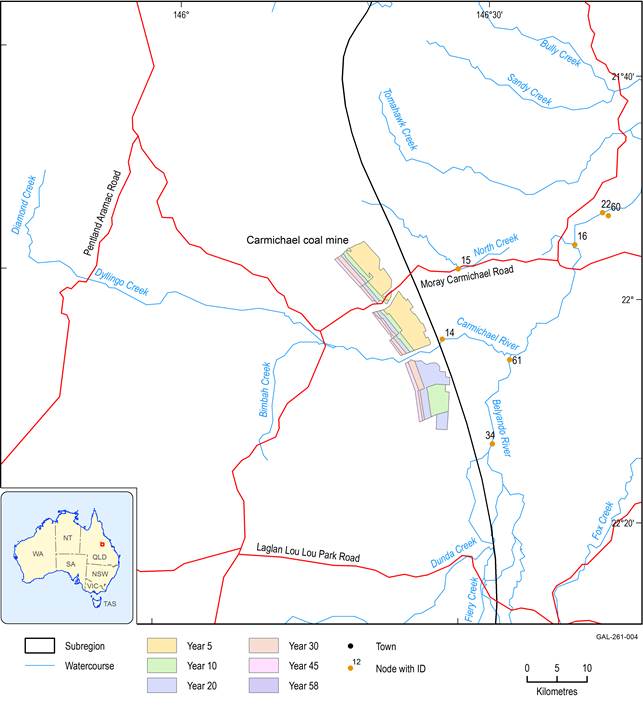 This map shows the open-cut footprint only, not the entire mine footprint that includes pits, roads, spoil dumps, water storage, infrastructure and any other areas disturbed by the mine operation.

For underground mines, the impact on surface runoff is through subsidence of the land surface associated with the progressive collapse of mined longwall panels. This impact is assumed to continue indefinitely. However, it should be noted that on a per unit area basis, the impact of an underground mine footprint on surface runoff is much less than that of an open-cut mine footprint.

Mine footprint areas are obtained from the mine environmental impact statement (EIS) and supplementary environmental impact statement (SEIS) reports published by the mining companies. Time sequences of mine footprint (i.e. the total area affected by mining operation) areas were estimated using the ArcGIS tool based on publicly available mine plan information.

The temporal evolution of footprint areas for the seven proposed coal resource developments in the Galilee subregion is shown in Figure 8. Each panel shows footprints for open-cut and underground mines. None of the mines is currently operational in the Galilee subregion. Therefore, no footprint area is shown for the baseline condition. The starting and ending dates of individual mines was assumed to be the same as reported in Section 2.3.4 of companion product 2.3 for the Galilee subregion (Evans et al., 2018). It was assumed that any infrastructure –including dams, levee banks and roads – which has beneficial future use by post-mine landowners will be left in place. Areas of these features were included in the residual footprint area after final rehabilitation.

Table 4 details the maximum footprint extent for each model node and the year in which that maximum occurs. In Table 4, the footprint is taken as the open-cut footprint plus 5% of the area of the underground footprint. Since subsidence-related ponding is assumed to occur in 5% of the landscape above a collapsed underground panel, the footprint percentages in Table 4 are likely to be directly relatable to the hydrological impacts presented in Section 2.6.1.6 . 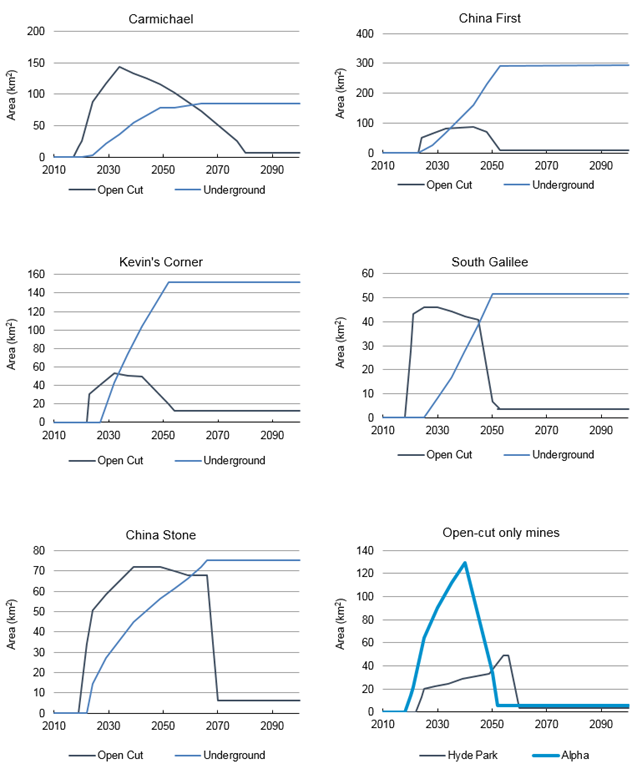