The numerical simulation of the hydrological changes due to the coal resource development pathway (CRDP) at the identified model nodes necessitates the development of an integrated surface water – groundwater modelling approach. The groundwater and surface water, however, operate at very different spatial and temporal scales. The surface water obviously is bound to river channels and floodplains. Streamflow is very responsive to individual rainfall events, requiring at least a daily temporal resolution to capture its ephemeral nature. Groundwater dynamics in the alluvial and Cenozoic deposits are mostly local and controlled through interactions with surface events, such as high rainfall or flooding (see Section 2.1.5 in companion product 2.1-2.2 for the Galilee subregion (Evans et al., 2018a)). Capturing this dynamic in a numerical groundwater model requires at a minimum a monthly resolution.

While fully coupled surface water – groundwater model codes are available (e.g. Hydrogeosphere, Brunner and Simmons, 2012), their use was not deemed to be justified within the Bioregional Assessment Programme due to the high data requirements for parameterisation and due to operational constraints. The latter relates mainly to the general numerical instability of such models and long runtimes which would severely limit a probabilistic uncertainty analysis that requires the models to be evaluated hundreds of times with vastly different parameter sets.

For this Assessment, a pragmatic coupling of two models was developed. The models consist of a regional groundwater model to simulate the change to the groundwater systems of the subregion and a rainfall-runoff model to simulate the change to the surface water systems of the subregion (Figure 3). The individual models have different spatial and temporal resolution which requires a set of customised processing steps to upscale or downscale model data to allow the models to be linked. 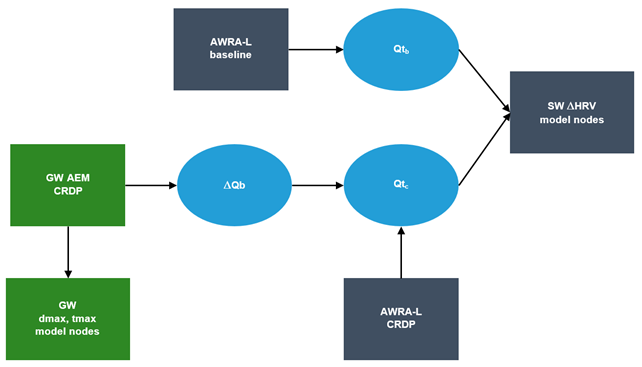