Santos holds PAL 2 for the development of the Bohena gas field, also known as the Narrabri Gas Project, located about 21 km south-west of Narrabri. PAL 2 represents a small portion of PEL 238 which covers most of the Pilliga Forest (Figure 12). Santos has submitted a Preliminary Environmental Assessment (PEA) to the NSW Department of Planning and Infrastructure (GHD, 2014), which proposes to develop its CSG reserves in the Narrabri area. It is likely the project will also require assessment under the Commonwealth’s EPBC Act.

The proposal is to develop a gas field with production and appraisal wells, gas and water gathering systems, and supporting infrastructure. The targeted coal seams for the project are primarily in the Maules Creek Formation (Eastern Star Gas, 2006).

The Narrabri Gas Project area covers about 98,000 ha in the Pilliga Forest and on private land, and seeks to avoid strategic agricultural land (Figure 12). It excludes the Conservation Area and Nature Reserve sections of the Pilliga woodlands. The proposed field operations will take up approximately 900 ha mostly in the Pilliga Forest. The Narrabri Gas Project could produce 200 TJ (terajoules) of natural gas per day, which would be transported via a new pipeline connection running south from Narrabri (Santos, 2014a). If approved, gas will be produced from up to 850 individual production wells or up to 425 pairs of well sets. The proposed project would include a central water management and treatment facility, located outside the Pilliga Forest, to store and treat the produced water for reuse; a central gas processing unit at the water treatment facility, to treat and compress the natural gas to Australian pipeline requirements; a small gas processing unit and water pumping station to transfer the gas and water extracted from the coal seams to the central processing facility; and supporting infrastructure including the upgrade of the Narrabri Operations Centre, workers’ accommodation, power generation and distribution networks (GHD, 2014).

The proposal includes a pipeline running south, to connect into existing infrastructure, that would be buried at least 750 mm below ground and avoid prime agricultural land to the maximum extent possible. Temporary construction facilities and other facilities located along the pipeline route would be rehabilitated after use. Santos currently has no plans to use hydraulic fracture stimulation on future wells drilled as part of the Narrabri Gas Project area, as geological data indicates that fraccing would not increase gas flows in the coal seams (Santos, 2014a).

For the Narrabri Gas Project, estimated peak water production is approximately 8 ML/day, which is forecast to stabilise at around 4 ML/day (Santos, 2012). The produced water and brine is intended to be first stored in ponds and then treated – typically by desalination using reverse osmosis or through amendment by altering the chemical balance of the water. The selection of the treatment process will depend on the original water quality and the intended use of the treated water (Santos, 2012).

Subject to project approval, Santos anticipates construction to commence in mid-2015 with first gas scheduled for late 2017–18. CSG wells would be progressively drilled from mid-2015 over the life of the development. Mobilisation and construction of the gas processing facility and water treatment facility would occur over two years, between 2016 and 2017 (GHD, 2014). 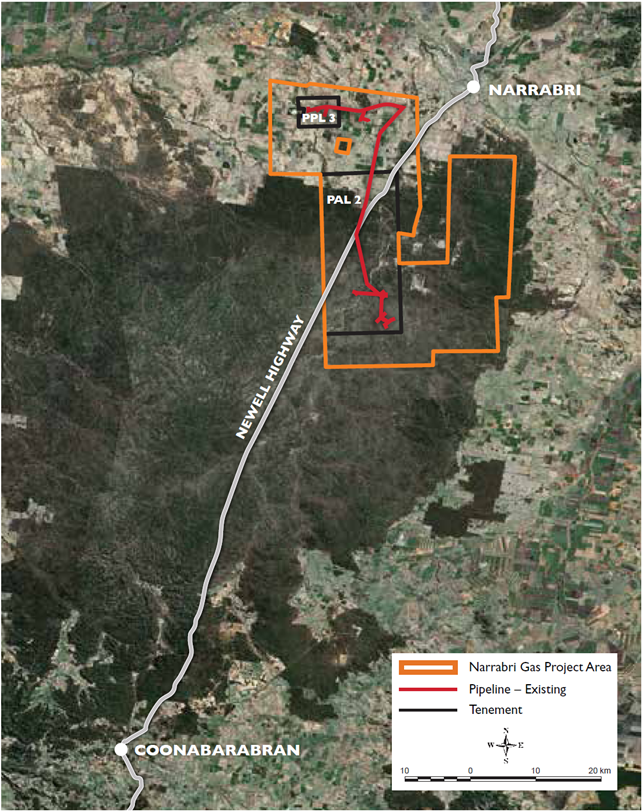 Source: Santos (2014). This figure is not covered by a Creative Commons licence. It has been reproduced with the permission of Santos.