Shenhua Watermark currently holds the Watermark Exploration Licence (EL) 7223 covering an area of 195 km2, approximately 25 km south-east of Gunnedah. The Watermark deposit contains shallow resources of domestic and export quality thermal coal contained in the Hoskissons Coal and Melvilles Coal Member, with additional coal in seams overlying the Hoskissons Coal and in the Maules Creek Formation at depth. Shenhua Watermark proposes to extract up to 10 Mt/year of ROM coal from the Hoskissons and Melville seams for a 30-year period using a standard open-cut mining fleet of excavators and shovels, along with haul trucks, dozers, graders, drill rigs and water carts (Shenua Watermark Coal, 2013). An environmental impact statement (EIS) for the project has been lodged and the project is currently being assessed by the NSW Department of Planning and Infrastructure (as of September 2014). The project is also being assessed under the Commonwealth’s Environment Protection and Biodiversity Conservation Act 1999 (the EPBC Act) due to the presence of listed threatened species and communities, listed migratory species, and impacts on water resources.

If the mine is approved, coal extraction will take place from three mining areas as shown in Figure 10. ROM coal reserves are estimated to be approximately 268 Mt. As mining progresses all disturbed areas will be progressively rehabilitated while tailings and coarse rejects will be co-disposed of in overburden emplacement areas (Shenhua Watermark Coal, 2013).

The proposed development includes the construction and operation of a mine access road; administration, workshop and related facilities; a coal handling and preparation plant; and a rail spur, rail loop, Kamilaroi Highway rail overpass and associated train load facility and connection to the Werris Creek to Moree railway line. Communication and electricity infrastructure would be required. If approved, the operation is anticipated to employ a peak of approximately 600 full-time equivalent employees and associated contractors during operation at full production, with a peak of approximately 600 contractors during construction. Project activities are planned to take place within a disturbance boundary, requiring approximately 4084 ha of land disturbance, although some water, power and communications infrastructure may be located outside the disturbance boundary and the project boundary (Shenhua Watermark Coal, 2013).

Produced coal is proposed to be transported to the Port of Newcastle via the Werris Creek to Moree railway line and the Main Northern railway line. Construction and operation of surface and groundwater management and reticulation infrastructure is discussed in Shenhua Watermark Coal (2013), as well as impacts on and management of groundwater. 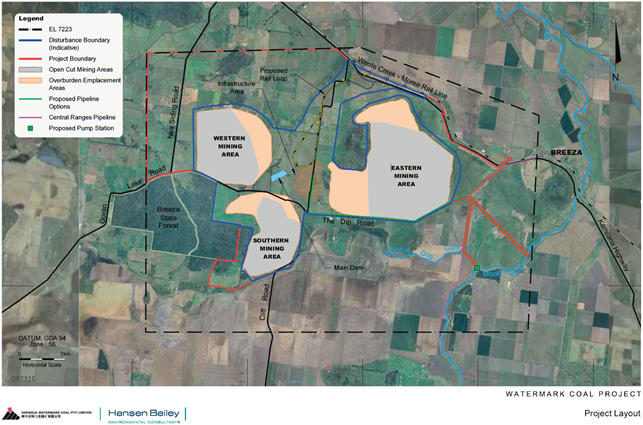 The Rehabilitation and Mine Closure Strategy for Watermark proposes that final land use will be a mixture of native vegetation communities and a mixture of pasture species for agricultural purposes. Shenhua Watermark aims to achieve a majority of post-mining land capability Class III through the creation of gentle topography (to minimise erosion) and using excess topsoil and subsoil resources available (Shenhua Watermark Coal, 2013).

With the exception of the Western Mining Area (the final void), it is planned that mining areas will be progressively rehabilitated as mining advances or concludes, and the rehabilitation programme will include backfilling final voids, soil management and translocation, implementation of erosion and sediment controls, revegetation, and relevant maintenance and monitoring to achieve a successful and self-sustaining landscape. The final void is anticipated to cover approximately 100 ha with a maximum depth of approximately 80 m below the natural ground surface. A mine closure plan would be developed within five years of closure (Shenhua Watermark Coal, 2013).