The geological Gunnedah Basin is the subject of six current CSG developments in various stages of exploration and appraisal. The principal seams for CSG exploration in the Gunnedah Basin are the Hoskissons Coal, which lies within the Late Permian Black Jack Group, and the Early Permian coal seams of the Maules Creek Formation, located towards the base of the Bohena Trough. Santos Ltd is the main operator of CSG projects, holding the largest proportion of petroleum tenements in the Namoi subregion. Eastern Star Gas operated the Narrabri Gas Project until they were acquired by Santos in 2011.

Exploration activities for CSG in NSW fall under the NSW Petroleum (Onshore) Act 1991. There are three main types of permits issued under the Act: a petroleum exploration licence (PEL), a petroleum assessment lease (PAL) and a petroleum production lease (PPL). A PPL allows commercial extraction or production of petroleum resources.

Figure 11 shows the location of petroleum tenements in the Namoi subregion. Most of the Namoi subregion is underlain by PELs, with the exception of one tenement at the western extent of the subregion. Although this may suggest that CSG extraction could become widespread in the area, current CSG exploration developments are concentrated in the Gunnedah Basin, which is only present in the central eastern part of the Namoi subregion. There is only one petroleum production licence identified: PPL 3, which was granted to Eastern Star Gas (now Santos) to develop the Coonarah conventional gas field, located about 20 km west of Narrabri (see Figure 11).

Figure 11 shows the location of CSG wells in the Namoi subregion, as recorded in the MinView database (NSW DTI, 2014). According to MinView, 175 CSG-related wells have been drilled in the Namoi subregion. The majority of wells are located to the south and south-west of Narrabri. With the exception of the Narrabri Gas Project owned by Santos, the CSG projects are still at an exploration stage. 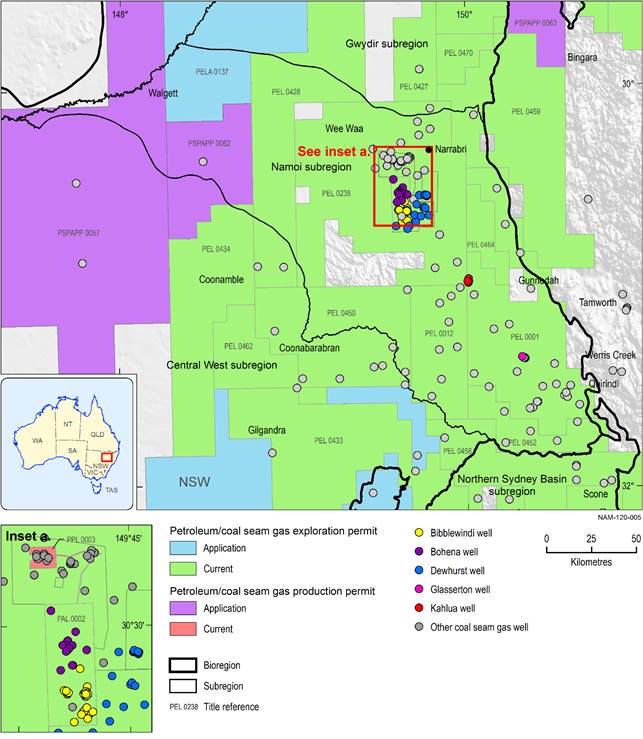