The Maules Creek Project, operated by Whitehaven Coal, is approximately 20 km north-east of Boggabri and adjacent to the Boggabri mining lease. The target coal seams are within the Maules Creek Formation. The resource is expected to sustain a project life in excess of 30 years with the expected base of the pit at approximately 300 m below surface (AGE, 2011). The project has an estimated Joint Ore Reserves Committee (JORC) Code resource of 650 Mt and recoverable reserves of 362 Mt (Whitehaven Coal, 2014a). The Maules Creek Project will produce high quality, low-ash, low-sulfur and low-phosphorus semi-soft coking coal and low-ash, low-sulfur, high-energy thermal coal (Whitehaven Coal, 2014b). The Maules Creek Project was given approval from the NSW Government to operate an open-cut mine in October 2012 and Australian Government approval in February 2013. When construction of the project is completed in mid-2015, Maules Creek will have installed capacity to produce 13 Mt/year run of mine (ROM) coal and 12 Mt/year of high quality low-ash thermal and metallurgical coal. The increase to full production will take about three years.

Construction at the Maules Creek Project site commenced in January 2014, following the completion of the Stage One salvage works under the Aboriginal Archaeology and Cultural Heritage Management Plan. Construction of the rail line for the Maules Creek Project and the Boggabri Coal Mine commenced in early January 2014 and construction of the pipeline to bring in water for the construction activity and the mine began in late December 2013. The first coal is expected to be railed from project in March 2015 (Whitehaven Coal, 2014b). 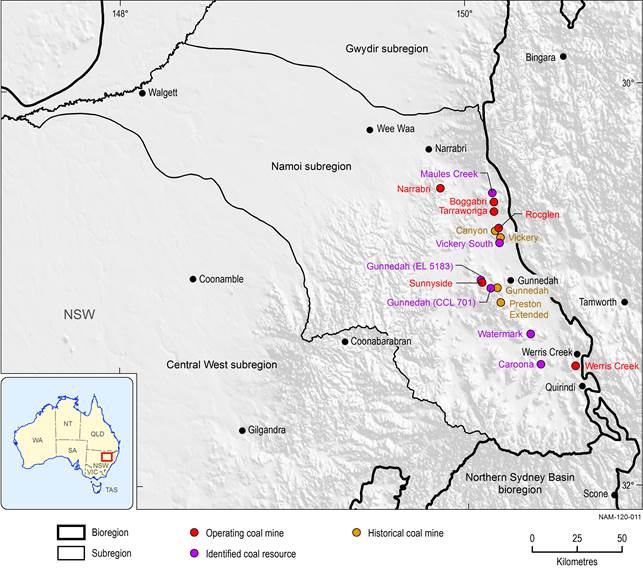