Coals of the Greta Coal Measures occur to depths greater than 600 m in the Hunter Coalfield. The sequence is about 200 m thick in the Muswellbrook area and 60 to 75 m thick in the Lochinvar area (Basden, 1969; p. 323). The coals characteristically have low ash and medium moisture contents. The Saint Heliers Coal Member dips slightly to the north and has a thickness of approximately 9.5 m at Muswellbrook No 2 Coal Mine, whereas the Loder Coal Member dips slightly to the north with a thickness of 1.5 m (Idemitsu Kosan, 2010). In the Muswellbrook area the seams associated with the Muswellbrook Anticline are thicker compared to those in the south near the Lochinvar Anticline (Figure 5). Six seams are identified in the Muswellbrook area, although these cannot be consistently correlated between the northern and southern parts of the anticline (Beckett, 1988). 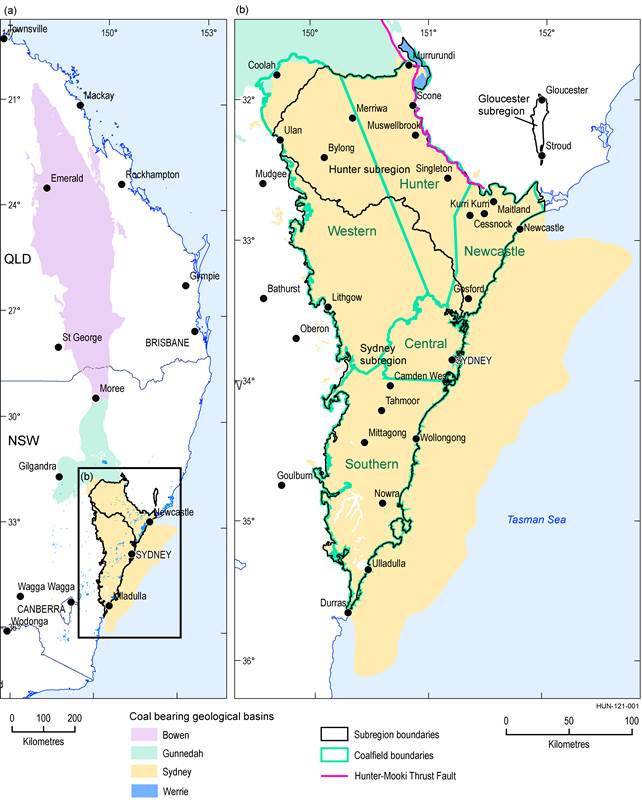 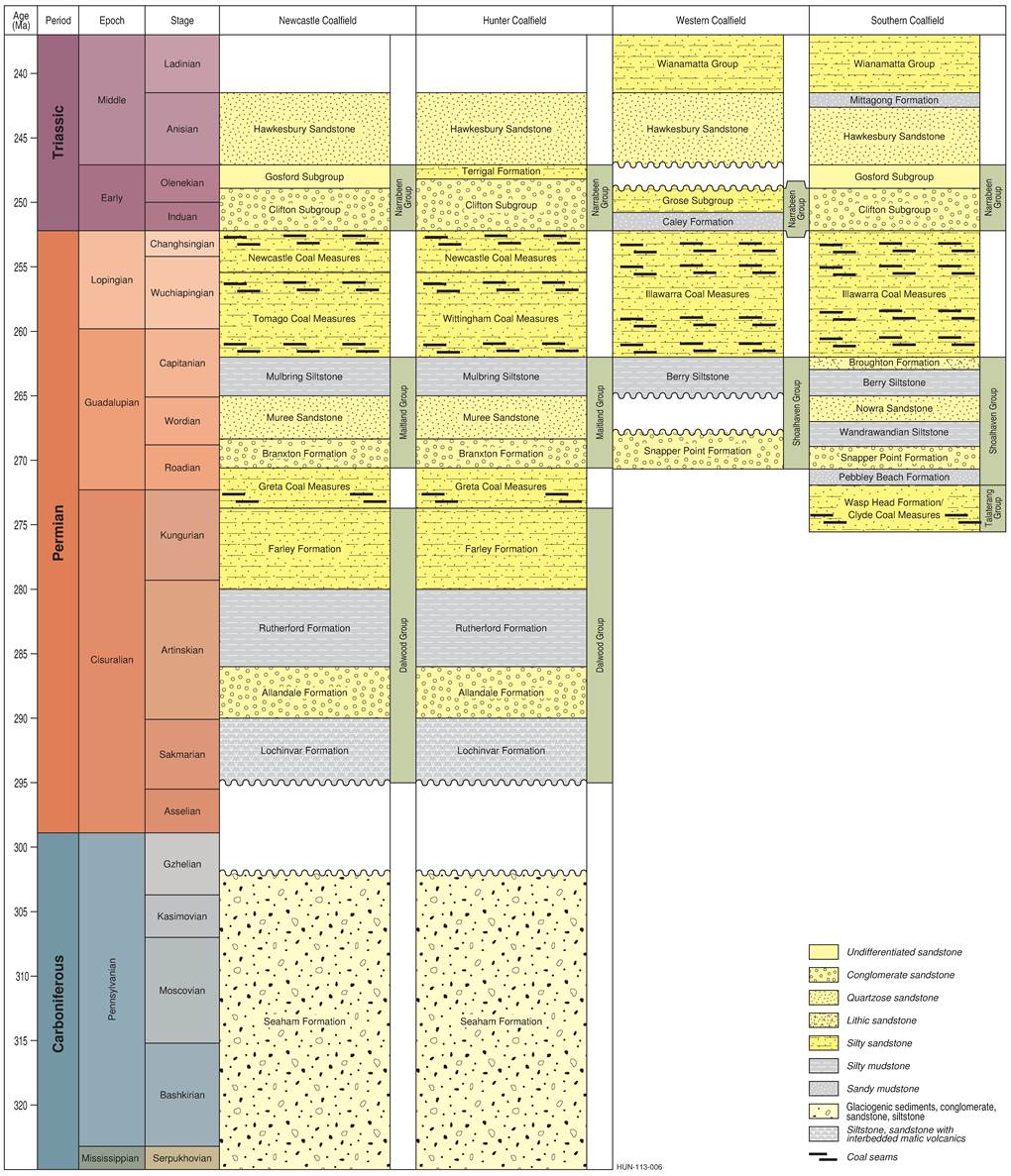 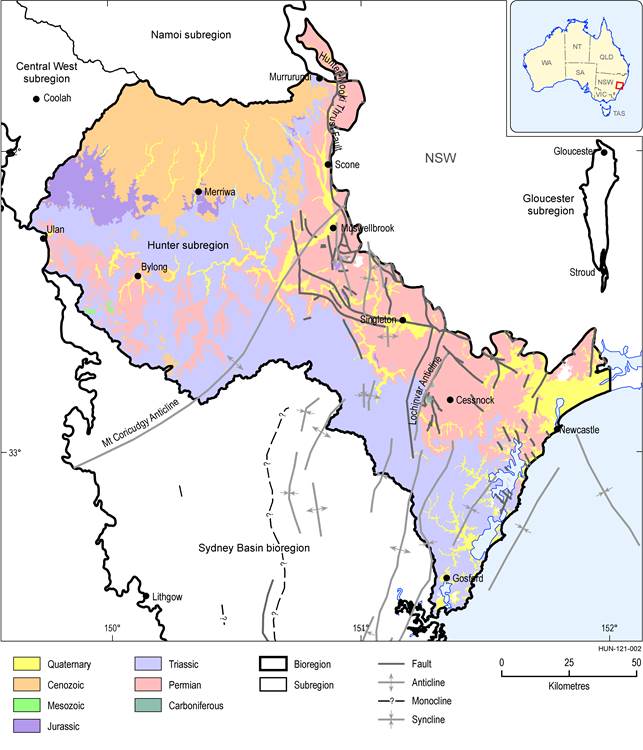 The Greta Coal Measures near the Lochinvar Anticline include the Lower and Upper Homeville coal members, which are low ash-yielding coals with high volatile matter. The informally named Greta Coal Seam is up to 11 m thick and split by the Kearsley Lens, with a maximum thickness of about 5 m. It consists mainly of hard, bituminous coal with very low ash and high volatile matter (Basden, 1969, p. 325). Seam continuity is commonly disrupted by faulting and some seams are thermally affected by igneous intrusions (Beckett, 1988). In the Singleton area the Greta Coal Measures are generally high in inertinite and have an average mean maximum vitrinite reflectance (Rv,max) of 0.91%. Ward et al. (2007) attributed Rv,max suppression in these marine-influenced coals to the preservation of aliphatic structures in vitrinite.

The coal seams of the Foybrook Formation are well developed in the Muswellbrook area but are characterised by erratic splitting. The lower seams of the Vane Subgroup generally have similar thicknesses and are characteristic of the facies change from lower to upper delta plain deposits (Sniffin and Beckett, 1995, p. 192). The Liddell Coal Member is the thickest coal-bearing unit, up to 14 m in the Foybrook area. Most of the seams are characterised by multiple splitting, thus, individual coal seams tend to be thin and of inferior quality (Sniffin and Beckett, 1995, p. 185). Where the Wittingham Coal Measures crop out around the Lochinvar Anticline they are about 60 to 75 m thick.

The coal seams at the Mount Owen Mining Complex are situated between two regional thrust faults, the Hunter Thrust and Hebden Thrust, each limiting the lateral extent of coal (Glencore, 2014a). The uppermost seam of this subgroup, the Lemington Coal Member, is particularly prone to splitting, having a maximum net coal thickness of 16.1 m and a maximum total seam thickness of 107.8 m. In the central regions of the coalfield the seam names of the Vane Subgroup differ. Here, the counterpart of the Lemington Coal Member, the Wynn Coal Member, is not as variable in thickness (Pinetown, 2012, p. 112). The coals of the Hunter Coalfield are generally high in vitrinite, followed by inertinite and then liptinite with variable proportions of mineral matter. However, seams of the Vane Subgroup contain less inertinite compared to the seams of the Jerrys Plains Subgroup (Pinetown, 2012, p. 118).

Coal distribution in the Jerrys Plains Subgroup of the Wittingham Coal Measures is more variable compared to that of the Vane Subgroup. Although most of the upper delta plain seams are laterally extensive (Sniffin and Beckett, 1995, p. 192), some of the largest variations occur in the Blakefield, Mount Arthur and Piercefield coal members (Pinetown, 2012, p. 112). In the east of the coalfield the Jerrys Plains Subgroup is primarily absent as a result of extensive uplift and subsequent erosion. In the central part of the coalfield, seam thickness in the Jerrys Plains Subgroup is less variable than in the south. Seams of the Jerrys Plains Subgroup in the north of the coalfield generally have similar splitting behaviour and distribution patterns to those in the central and southern regions. The lowest seam, the Bayswater Coal Member seam, varies in thickness from about 1 to 14 m, and has a dull character with high inertinite content. The brighter coals such as the Broonie through to the Warkworth coal members are subject to extensive splitting. The stratigraphic section from the Bayswater Coal Member to the Warkworth Coal Member varies from about 100 to 300 m thick.

Coal seams in the middle of the Jerrys Plains Subgroup are subject to splitting, and the thickness of individual seams varies between about 0.3 and 4 m within a section from 70 to 200 m thick. The upper seams, occurring within a section ranging from 70 to 200 m, are also usually split and associated with several tuffaceous claystone marker beds (Sniffin and Beckett, 1995, p. 193). In the Warkworth-Broke area the Whybrow Coal Member, which is the uppermost unit in the subgroup, varies in thickness from about 2 to 5 m. General characteristics of coals in the Hunter Coalfield are provided in Table 3.

Vitrinite is the dominant maceral group in coals of the Jerrys Plains Subgroup (generally greater than 50%). Inertinite is most abundant in seams from the Bowfield Coal Member to the Bayswater Coal Member, which could indicate greater extent of oxidation during deposition of coals in the Jerrys Plains Subgroup (Pinetown, 2012, p. 118). Coals in the south of the Hunter Coalfield are generally of higher rank in comparison to those in the north for the same depth, all generally increasing linearly with increasing depth. Rv,max for coals in the south of the coalfield varies within a broad range between 0.56 and 1.15%, although most are greater than 0.75%. In the central regions, Rv,max is about 0.72 to 1.00%, whereas in the west Rv,max is between 0.65 and 0.95% (Pinetown, 2012, p. 120).

South of the Hunter River Cross Fault the upper coal seams of the Newcastle Coal Measures are generally thin, indicating fluvial conditions with rapid channel migration, seam splitting and erosion towards the end of coal measure deposition (Sniffin and Beckett, 1995, p. 192). Seams of the Abbey Green Coal (historically part of the Wollombi Coal Measures) are split, varying between 0.8 and 97.4 m thick (Pinetown, 2012, p. 111). Elsewhere in the coalfield the coal seams of the Newcastle Coal Measures are only present towards the west, and show distribution patterns that indicate fluvial depositional conditions with rapid channel migration depositing thinner coal seams. The coal sequence at the Mangoola Coal Mine typically shows a massive conglomerate/sandstone overburden between 15 and 90 m thick. This includes the Awaba Tuff, about 9 to 10 m thick at the site, which separates the Great Northern and Fassifern coal members (Umwelt (Australia) Pty Limited, 2013). An Rv,max of 0.56% for the Fassifern Coal Member of the Newcastle Coal Measures in the south of the coalfield, occurring about 90 m below surface was recorded by Pinetown (2012, p. 118).

Summary and download
1.2 Resource assessment for the Hunter subregion

Data register for product 1.2 Resource assessment for the Hunter subregion