The Namoi river basin drains an area of 42,000 km2 flowing from east to west from its headwaters in the Great Dividing Range (CSIRO, 2007; MDBA, 2012). Further details on the Namoi river basin and the Namoi subregion, including what proportion of the river basin is inside the subregion, are given in Section 1.1.2 Geography. The main surface water resource of the Namoi subregion is the Namoi River. Its approximate mean flow upstream of Walgett (station ID 419091) between 1999 and 2009 was 269.4 GL/year. The major tributaries of the river upstream of Narrabri are Peel, Manilla, McDonalds and Mooki rivers and Coxs Creek (Figure 36). The tributaries downstream of Narrabri are Pian (anabranch), Gunidgera (anabranch), and Baradine and Bohena creeks (Green et al., 2011). There are numerous other minor tributaries. See Figure 37 for a detailed stream network.

The lowland floodplain downstream of Narrabri supports small lagoons, wetlands and anabranches and is important for a range of aquatic habitats (MDBA, 2012; SKM, 2011). Detailed information about water resources including water supply, rainfall, climate and other features of the area is given in Green et al. (2011) and CSIRO (2007). 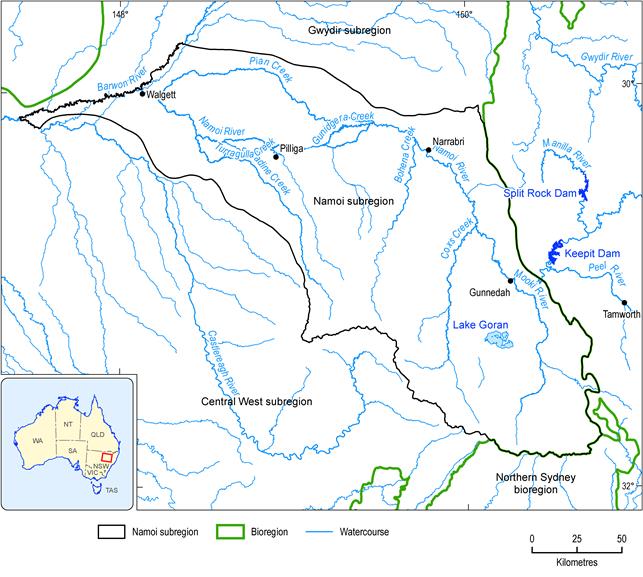 The Peel catchment is the main catchment in the eastern part of the basin. The Peel River contributes an average annual flow of 280 GL to the Namoi River, flowing from the western side of the Great Dividing Range to its confluence with the Namoi River downstream of Keepit Dam. A number of tributaries contribute to the Peel River including Duncans, Dungowan, Goonoo Goonoo, Moore, Timbumburi, Tangarratta and Attunga creeks, and Cockburn River. Some of the tributaries (e.g. the Cockburn River, Goonoo Goonoo Creek and Dungowan Creek) are perennial for most years. The Peel River is regulated by Chaffey Dam (NSW Office of Water, 2010). Although Peel River contributes to the Namoi subregion flow, the entire Peel catchment lies outside of the subregion.

The Mooki catchment is located in the south‑east of the Namoi river basin. Its major tributaries are the Phillips, Warrah and Quirindi creeks. Lake Goran, the largest natural water body in the Namoi subregion, occupies 82 km2 when full and is located in the Mooki River catchment (Zhang et al., 1997; Green et al., 2011). Water sharing plans to regulate water use in the Mooki River and its tributaries have been developed (NSW Office of Water, 2012).

Coxs catchment, located in the southern part of the Namoi subregion, covers about 9.5% of the area of the Namoi river basin. Its main tributaries include Washpen, Dunnadie, Kerringle, Quia and Cobblar creeks. The catchment contains good agricultural soils and is a highly productive area for agriculture (NCMA, 2011).

This catchment lies in the western part of the Namoi subregion. The Baradine Creek flows in a north‑westerly direction originating from hills west of the Newell Highway, to its confluence with the Namoi River east of Walgett (Figure 36). Baradine Creek is an ephemeral creek with an average annual flow at Kienbri No. 2 gauging station (with a catchment area of 1000 km2) of about 14 GL (Green et al., 2011).

The Bohena catchment is located south of Narrabri and is drained by Bohena, Cowallah and Bibblewindi Creeks. Less than 160 km2 of this catchment, mainly in the northern part, is cleared and is used for sheep and cattle grazing. The rest of the catchment is used for biodiversity conservation (NCMA, 2013).

The Namoi river basin is well drained by the Namoi River and its tributaries for most areas east of Pilliga (Figure 37). The surface drainage network extends through different landscape units ranging from uplands with steep terrain to flat low lying alluvial plains (Lampert and Short, 2004). The area surrounding Lake Goran is internally drained and has a low density of natural surface water drainage. About two-thirds of the Namoi river basin is relatively flat. The low lying alluvial flood plains of the Namoi subregion are less densely drained than the areas in the east of the basin, possibly due to the flat terrain.

Irrigated agriculture covers approximately 5.3% of the Namoi subregion (see Table 3), the majority of which is located downstream of Narrabri (CSIRO, 2007). Therefore the surface water drainage network resulting from irrigation channels is not as extensive as the natural drainage network. 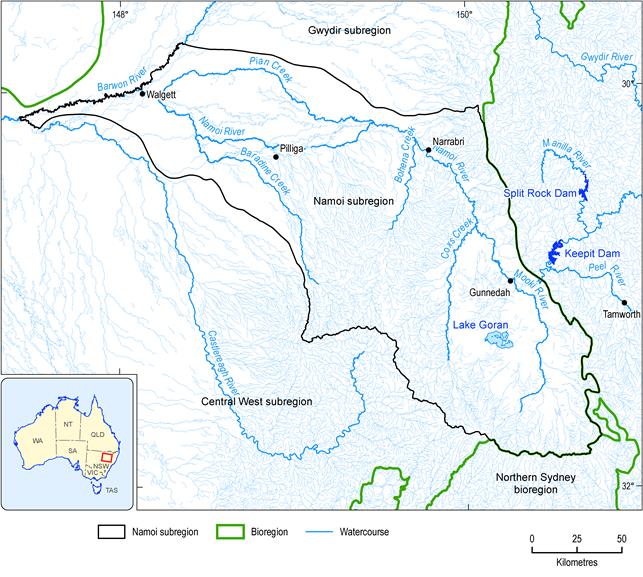 There is much surface water infrastructure such as major and minor public water storage dams, farm dams, culverts, causeways, fords, streamflow gauging weirs, bed control structures, floodgates and bridges in the Namoi river basin including open-channel conveyance systems for irrigation. For a fish passage barrier study, a total of 496 instream structures were assessed by the NSW DPI (2006b). The three major dams in the Namoi river basin lie outside of the Namoi subregion. They are:

These dams supply water to irrigators, the main water users in the basin, although Keepit Dam was originally built for flood mitigation. A smaller dam (Dungowan Dam, 6 GL, on Dungowan Creek in the Peel River system, not shown) supplies water to the city of Tamworth – the largest urban centre in the basin. Additionally, there are farm dams with an estimated capacity of 160 GL spread across the Namoi river basin (Basin Plan – item 11 Schedule 3).

Namoi River and its tributaries have more than 75 weirs on them owned by the State Water and different shire and regional councils (NSW DPI, 2006a, 2006b). Some of the main weirs are the Mollee, Gunidgera, Weeta, Namoi (downstream of Keepit Dam) and Walgett weirs. Most of these weirs are used for irrigation diversions. See NSW DPI (2006b) for further detail.

There are about 116 streamflow gauging stations (many of which have been discontinued) of which sixty-eight have continuous flow monitoring gauges (NSW Office of Water, 2010). The mean daily flows at selected gauges, summarised in Table 10, show that streamflow record periods vary from nearly 30 years to more than 100 years. The Namoi River at Gunnedah (catchment area of 17,100 km2) has the highest mean daily flow. The effect of weirs and other diversions on the Namoi River below Gunnedah is evident from the lower mean daily flow further downstream (e.g. Namoi River at Bugilbone).

The annual flow hydrograph of the Namoi River at Boggabri (Figure 38) and the plot of cumulative difference from the long-term annual mean of 773 GL (Figure 39) show mostly lower than long-term average flows during 1937 to 1948 and 2001 to 2009 (see Burrell and Ribbons (2006) for further interpretation of cumulative differences from the mean plots). From 1937 to 2012, 71% of yearly flow values have been less than long-term mean with 50% of the flow less than half the long-term mean. During this period, 13% of the flows are twice the long-term mean. This suggests annual flows in the Namoi River at Boggabri are characterised by mostly below average flow with periodic occurrence of very large flows.

Similar plots for the Namoi River at Gunnedah (upstream of Narrabri) show mostly lower flows than the long-term annual mean of 669 GL occurring during 1911 to 1949 and 1979 to 2011 (Figure 40 and Figure 41). For the past 33 years, flows have been above the long-term annual mean in only six years. Also, the river flow has continuously been below the long-term mean since 2001 (except in 2010) suggesting a drought of more than 10 years. These impacts on flow could be further affected by the Namoi Catchment Management Authority’s (NCMA) ten-year Catchment Action Plan (2010–­2020), which sets biodiversity targets aiming to achieve at least 30% and 70% woody vegetation cover in cleared and intact catchments respectively (NCMA, 2011).

Overall, Figure 38 to Figure 41 show the impacts of combined climate and land use changes and catchment development since the 1950s on Namoi River flows. A more detailed assessment is needed to ascertain the relative effect of each of these factors.

Figure 42 shows the variations in annual volume of stored in the three major dams. The dam water storages generally reflect the annual rainfall pattern in the area (see Figure 45).

Basic water quality indicators such as electrical conductivity (EC), turbidity, total suspended solids, and nutrients were monitored on a monthly basis for the five-year Namoi Water Quality Project (NWQP) study, starting in July 2002 (Mawhinney, 2011). Residues of herbicides and insecticides were also measured. The study found that majority of sites had median electrical conductivity (EC) results that did not meet the ANZ Environmental and Conservation Council (ANZECC) and Agriculture and Resource Management Council of Australian and New Zealand (ARMCANZ) default trigger values for the protection of aquatic ecosystems of south-eastern Australia. Median total phosphorus and total nitrogen in excess of the ANZECC and ARMCANZ default trigger values in conjunction with low flows were also experienced. The study reports that despite not meeting the default trigger values of EC the water was still suitable for irrigation and although the heightened nutrients provided favourable conditions for the growth of toxic blue-green algae they did not eventuate in high volumes due to a lack of other causation factors (Mawhinney, 2011). The project findings are summarised here:

Figure 43 shows the flooding extent of the largest flood event in the Namoi river basin in 1956, attributed to two wetter years due to the La Niña events of 1955 and 1956. These were the two strongest recorded La Niña events in Australia (Bureau of Meteorology, 2013). The annual total rainfalls for 1955 and 1956 were well above the annual long-term mean at several sites in the basin. For example, annual rainfalls in Narrabri for the two years were 872 and 850 mm respectively (cf. the long-term average of 649 mm/year). Although these are not among the highest rainfalls for the basin, residual effects of a wetter year in 1955, coupled with the above-average rainfall in 1956, most likely created the conditions that led to the 1956 flood (O’Gorman, 2010). 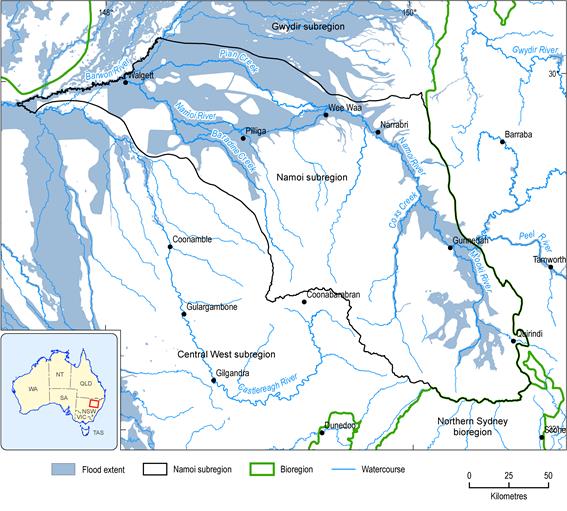 Source data: data for Figure 43 were digitised by Laurie, Montgomerie and Pettit Pty Ltd on contract to the NSW Water Resources Commission from the Namoi Floodplain Atlas produced in 1979 using aerial photographs and from on-ground knowledge and Commission records.