Figure 3 shows the location of the Namoi subregion within the Northern Inland Catchments bioregion. Most of the boundary of the Namoi subregion is coincident with the former Namoi Catchment Management Authority boundary, except in the east where the Hunter-Mooki Thrust System, which marks the eastern extent of the coal, defines the boundary. Since the faulting is not vertical (see Figure 16 cross-section), the coal seam is known to extend slightly east of the surface expression of the fault line.

The topography of the subregion is characterised by highlands in the east and south, and a broad floodplain in the west. Figure 4 shows a digital elevation model of the area, with the highest elevation of 1400 m in the Nandewar Range to the north-east (Mount Kaputar, which is 1508 mAHD, lies just outside the subregion), the Liverpool Ranges in the south-east and the Warrumbungle Ranges to the north of Coonabarabran. These areas are characterised by steeper slopes (>20°) than elsewhere in the subregion. The Namoi river basin slopes largely towards the north and west, with most slopes having gradients less than 1.5°. The subregion’s lowest point of approximately 95 mAHD is west of Walgett.

The area south-east of Narrabri is characterised by river valleys with broad floodplains bounded by low hills. West of Narrabri there is low topographic relief, with the land forming an extensive alluvial plain. The plain is dissected by flood runners[1], billabongs and warrambools[2] that only flow during times of high flow. The Namoi River splits into divergent distributaries near Wee Waa. The major channels are the Namoi River, Pian Creek, Gunidgera Creek and Turragulla Creek (Figure 36). Moving westward, the channels form a single, main channel, approximately 10 km east of Walgett. At Walgett the Namoi River joins the Barwon River, which joins the Darling River beyond the boundaries of the bioregion. 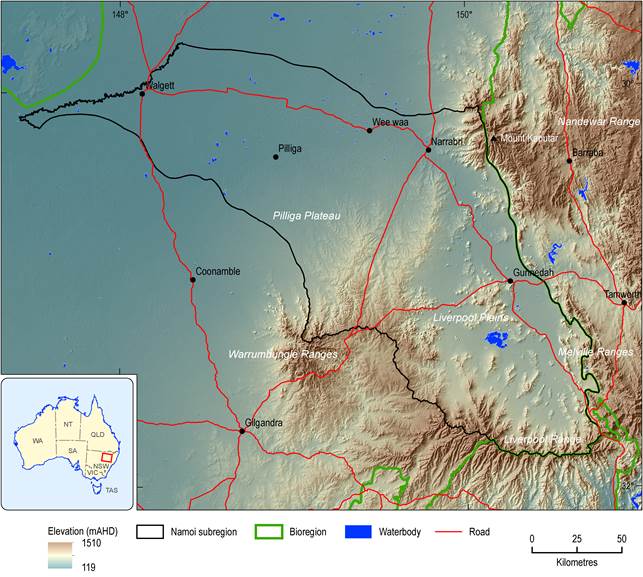 Thoms et al. (1999) described a distinct physiographic boundary slightly east of Narrabri that separates the eastern and western regions of the Namoi river basin. The boundary reflects a north-south outcrop of Pilliga sandstone, which widens to the south to form a plateau of erosion-resistant sandstone at an elevation of about 400 m AHD, sometimes referred to as the Pilliga Plateau (Figure 4). The zone of eroded sands surrounding the plateau is referred to as the Pilliga Sandsheet. This boundary coincides with distinct changes in the geomorphology of the river basin (described below). A third distinctive physiographic region is the Liverpool Plains, which are alluvial plains occupying 1.2 million hectares to the south of Narrabri and significant for their agricultural production (Figure 4). The Liverpool Plains are bounded to the south by the Liverpool Ranges, to the east by the Melville Ranges and to the west by the Warrumbungle Ranges and Pilliga Plateau.

The upland area east of Narrabri and the Hunter-Mooki Fault is where the Namoi, Peel, Manilla and Macdonald rivers originate and where the major water storages are located. Although this area is not part of the Namoi subregion, it is an important source of the subregion’s water. Lampert and Short (2004) undertook a geomorphic assessment of the whole of the Namoi river basin drainage system to provide a basis for prioritisation of river conservation and rehabilitation efforts. In these upland areas, common drainage features include gorges (irregular, V or U shaped with valley controlled geometry and sinuosity), floodplain pockets (single, bedrock or terrace confined with low sinuosity channels), and bedrock controlled gravel channels (single, symmetrical to asymmetrical within partly confined valleys).

The geomorphology of the Liverpool Plains is described in Dawes et al. (2000). Erosion of the basaltic Liverpool Ranges began in the Miocene, and as the climate dried in the Pleistocene the depositional environment changed from braided streams, depositing interbedded clays with sand and gravel layers (the Gunnedah Formation), to lower energy meandering streams depositing finer-grained black, grey and brown clays (the Narrabri Formation). The lower energy system is consistent with the current conditions, resulting in the formation of fertile and productive alluvial plains. The Liverpool Plains are drained by the Mooki River and Coxs Creek, the catchments of which are fully contained within the subregion.

West of the Hunter-Mooki Fault, the slopes of the river valleys emerging from the upland areas of the catchment decrease significantly and the valleys widen progressively to form the extensive floodplains of the western subregion. Thoms et al. (1999) characterised the rivers in this region as typically ‘meander’ or ‘anabranch’. In the ‘anabranch’ type rivers the main channel is relatively stable, but can experience some bank erosion, and the system is multi-channelled during floods. In ‘meander’ type rivers the main channel commonly experiences bank erosion and is a source and store for sediment transfer.

Young et al. (2002) investigated the geomorphology of the floodplains west of Narrabri. Paleochannels across the floodplain are typically significantly larger than the modern channels suggesting the flows that formed them were approximately twice the magnitude of modern Namoi flows. Sediments to the south of the main Namoi channel in this region are dominated by sands eroded from the Pilliga outcrops to the south and east. River channel properties, such as meander length and sediment particle size, indicate that discharge in the river basin decreases in a downstream direction. Examination of paleochannel properties suggests this characteristic of the river basin is consistent between the modern period and geological record. Young et al. (2002) suggested that dissipation of discharge into a number of paleochannels across the northern part of the floodplain would account for downstream discharge declines.

Thoms et al. (1999) noted that the alluvial plains across this region consist of alternating beds and lenses of gravel, sand and silt-clay sediments up to 150 m thick. This is consistent with the findings of Young et al. (2002) and therefore the recharge capacity across the alluvial plain will be highly variable, dependent on the presence of sandy sediments and a lack of sealing by finer clayey sediments from the more recent depositional history. The broad, sand-filled paleochannels provide localised alluvial groundwater sources.

Soils are an integral part of the Namoi river basin, providing nutrient cycling, water and organic storage, a resource base and natural environment. Namoi CMA (2012b) identified that improved groundcover would have significant outputs in relation to soil-organic matter, -carbon, -permeability and nutrient cycling. Some soils are compacted by stock and grazing activities and erosion of the top few centimetres of soil could seriously deplete nutrient capital (Tongway and Ludwig (1990), cited by Namoi CMA, 2012b), although Tongway and Ludwig (1990) studied an area to the west of the Namoi subregion.

The Namoi CMA (2012b) describes some soil types and classifications in the Namoi river basin. Soils in the area are typically clays, clay loams or sandy loams. High clay contents mean high water holding capacities when saturated, impeded drainage and hard setting surfaces, which restrict infiltration during heavy rainfall. The Australian Soil Resource Information System (ASRIS, 2011), which provides nationally consistent data and information on Australia’s soil and land resources, provides 55 soil descriptions across the Namoi river basin including for clays, friable red and brown soils, gravels, sandy earths and hard, red and yellow soils. Figure 5 shows soils as defined by the Australian Soil Classification (Isbell, 1996). The State of the Catchments (2010b) statement on soil condition reported that soils in the region are typically ‘Fair’ (‘Noticeable loss of soil function. Noticeable deterioration against reference condition’) to ‘Good’ (‘Slight loss of soil function. Noticable but not significant deterioration against reference condition’). The soil classed as ‘Fair’ is typically on forestry land and also on grazing land close to Gunnedah and Narrabri.

The State of the Catchments report (2010c, Land Management within Capability) for the Namoi reported that on average land is being managed at capability, which was given a rating of ‘Fair’.

Land capability is the inherent physical capacity of the land to sustain long-term land-uses and management practices without degradation to soil, land, air and water resources (Dent and Young, 1981).The LSC classification scheme takes account of limitations for sustainable use arising from water erosion, wind erosion, salinity, topsoil acidification, shallow soils/rockiness, soil structure decline, waterlogging and mass movement (NSW OEH, 2012). Figure 6 shows land and soil capability classification for the Namoi subregion based on the most limiting hazard. The vertosols of the lower Namoi floodplain and the Liverpool Plains are mostly LSC classes 3 and 4 with narrower belts of Class 2 land along the major river valleys. Class 2 indicates very good cropping land with fertile soils and short, low slopes, which can be managed with readily available, easy to implement management practices. Class 3 is capable of supporting most land uses, but more intensive management practices are needed to avoid moderate severity degradation from a range of hazards, while Class 4 lands are generally not capable of sustaining high impact land uses without use of specialised management practices requiring high levels of knowledge, expertise, inputs, investment and technology. Limitations are more easily managed for lower impact land uses like grazing. On the kandasols and sodosols of the Pilliga Plateau, most of the land is characterised as having severe limitations (Class 5), with localised areas of very severely limited land (Class 6). These lands can support a variety of land low intensity land uses, such as grazing, forestry and nature conservation. Highly specialised management practices can overcome some limitations to cropping on Class 5 land, but more limited lands are best suited to light grazing, forestry and nature conservation. The steeper slopes of the Liverpool Ranges and Warrumbungles are not capable of sustaining any disturbance and are best left undisturbed and managed for conservation, although grazing of native vegetation is pursued on some of these lands. 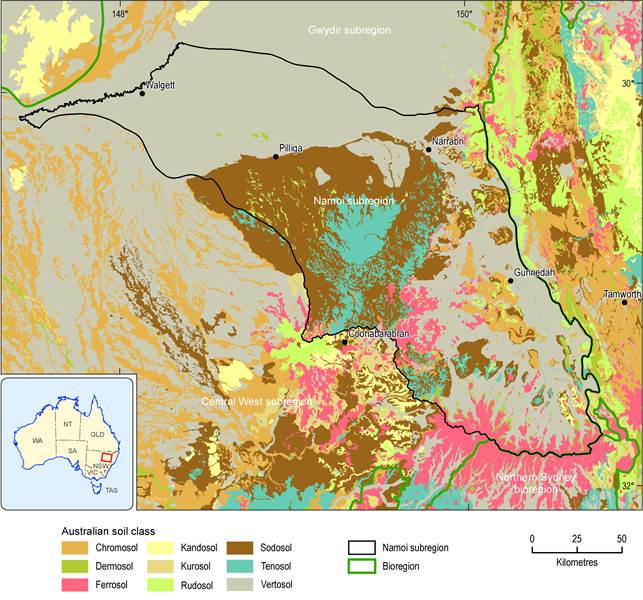 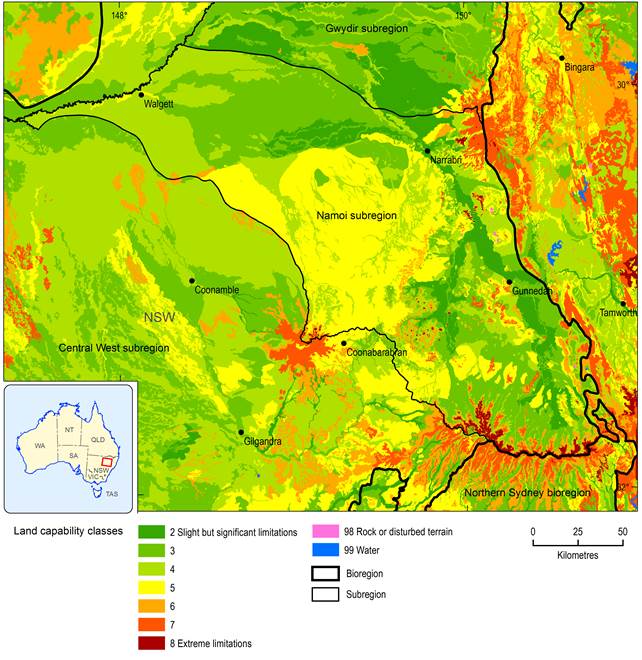 Mapping of land cover for the subregion is shown in Figure 7. This mapping was undertaken using time series Enhanced Vegetation Index (EVI) data obtained by the satellite-mounted Moderate Resolution Imaging Spectroradiometer (MODIS). The EVI data have a 250 m by 250 m pixel size and use vegetation greenness to identify the amount of photosynthesis occurring, which is then related to different vegetated land cover types (Geoscience Australia, 2013). Three distinct areas are evident: the Liverpool Plains area, which is dominated by rainfed cropping covers in the lower lying areas and sparse to open tree cover on more elevated areas; a large core between Coonabarabran and Narrabri, which is dominated by sparse to open tree cover and areas of sparse shrubs; and the western alluvial plains area where rainfed cropping lands are dissected by stringers of sparse to open woodlands, with a smattering of small water bodies and appearance of areas of tussock grasses in the western most areas towards Walgett. 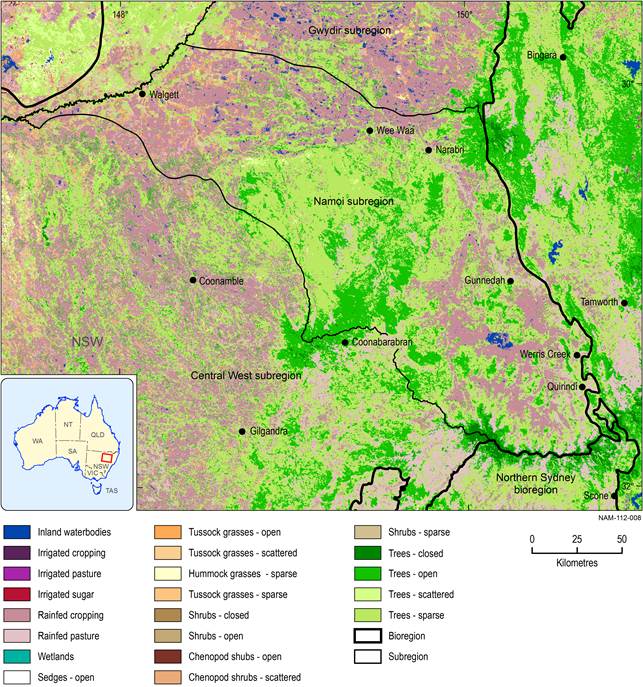 In 2001, the extent of native vegetation was estimated at 62% of the Namoi river basin area, with the remaining having been cleared for cropping and grazing (Namoi Catchment Management Board, 2002). Of the remnant vegetation, a significant proportion of this has been substantially altered. Some native grasses remain on grazing land, but much of the understorey has been removed (Namoi CMA, 2006). The proportion of current native vegetation that is a result of revegetation is uncertain. Revegetation activities are encouraged by the Namoi CMA (2006) and Greening Australia (2003).

Downstream of Narrabri there are many small lagoons and floodplain woodlands. Eco Logical Australia (2008) identified over 1800 natural wetlands and over 900 artificial wetlands (such as dams, weir pools), nearly half of which would be inundated by a 1-in-2 year flood event.

Away from the main river, Lake Goran is a significant wetland area and although the lake is rarely full, the centre of the lake is artificially fed by diversion of creeks by agricultural activities (Green et al., 2011; Banks, 1995). When dry, the lakebed is cropped and when flooded, it provides a habitat for waterbirds and is listed as a wetland of national significance (DSEWPC, 2013).