Following a review of work by researchers between the 1940s and 1990s, Tadros (1993) provided a detailed description of the stratigraphy of the Gunnedah Basin and also proposed a new stratigraphy. Subsequently, the stratigraphic nomenclature has undergone minor revisions (Figure 21[3]). In recent sequence stratigraphic studies that correlated the lithostratigraphy, sedimentary sequences, main tectonic events and basin phases of the Surat and Bowen–Gunnedah basins, Totterdell et al. (2009) have shown that the same series of basin-forming processes recognised in the Queensland portion of the Surat and Bowen basins also occurred in the Surat and Bowen–Gunnedah basins in NSW. However, there are minor differences in the timing and duration of the basin phases (Totterdell et al., 2009). 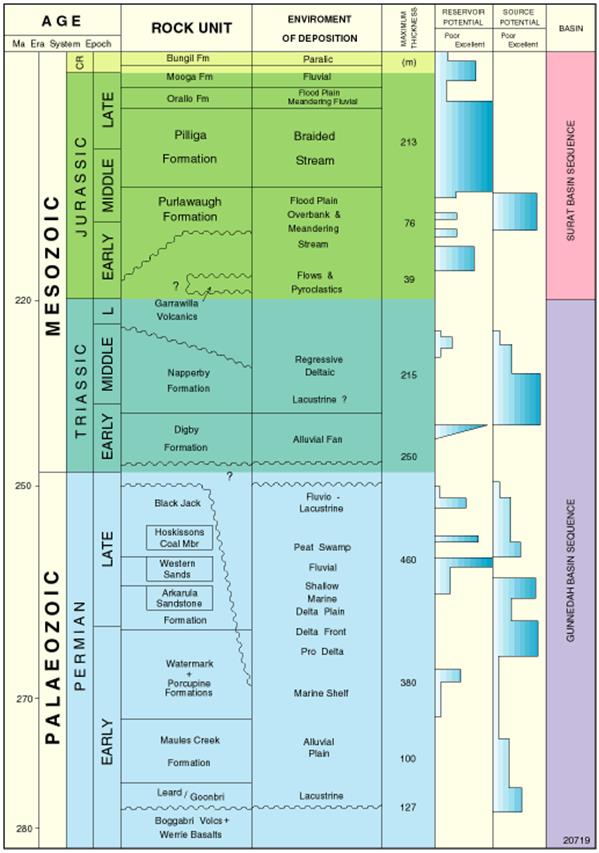 Deformation due to a contractional event in the Upper Permian resulted in erosion and led to the development of an essentially flat peneplain. Consequently, Supersequences E and F, which are recognised in the Bowen Basin, are not present in the Gunnedah Basin. The Lower Triassic, coarse-grained clastic sedimentary rocks of Supersequence G (i.e. the Digby Formation) were thus deposited directly on the Trinkey Formation (top of Supersequence D) in the Gunnedah Basin (Totterdell et al., 2009). The three lithological units of the Digby Formation are variably distributed across the basin, varying in thickness from 20 m in the north and northeast to >220 m in the south-east (Tadros, 1993). According to Hamilton et al. (1989) the formation appears to have formed from a series of major coalesced conglomerate fans which inundated and buried the older coal swamp delta plain of the Black Jack Group in the Upper Permian. The formation unconformably truncates the rocks of the Black Jack Group, the Watermark Formation and the Porcupine Formation in the northern part of the Gunnedah Basin. South of Narrabri it rests on various horizons of the Black Jack Group (Tadros, 1993). The Digby Formation consists mainly of lithic and quartz conglomerate, sandstone, and minor fine-grained sedimentary rocks (McDonald and Skilbeck, 1996).

The lacustrine to regressive deltaic sequence of the Triassic Napperby Formation (the Lower Triassic Supersequence H as recognised by Totterdell et al. (2009)) has three units. The lowermost unit is a finely laminated, dark grey siltstone 18 to 45 m thick which contains siderite and Fe-sulfides, indicative of deposition in a restricted near-shore environment. The middle unit is a sandstone/siltstone laminite that may have been deposited in a tidal flat setting. The uppermost unit consists of siltstone with minor interbedded claystone and fine-grained sandstone which developed in a regressive deltaic system (Hamilton et al., 1989; Othman et al., 2001). According to Totterdell et al. (2009) it is an aggradational to progradational coarsening-upward succession of lacustrine delta claystone, siltstone and sandstone in most parts of the basin. The units of the Napperby Formation are widely distributed across the basin, except for areas of the Maules Creek Sub-basin (Tadros, 1993).

The Deriah Formation is divided into a lower and an upper part, the former interpreted as deposits of a sandy alluvial fan and the latter as deposits of mixed load streams in point bars, levees, crevasse splays and poorly to well-drained swamps, as well as freshwater lacustrine environments (Tadros, 1993). Coarse to very coarse-grained granule-bearing sandstone occurs at base, and fine- to medium-grained green lithic sandstone and rare siltstone and claystone beds occur at the top of the lower unit. The upper unit comprises lithic sandstone and dark grey mudstone with minor plant roots and coal layers (Tadros, 1993). This formation is equivalent to Supersequence I which was deposited in fluvial, floodplain and lacustrine environments by a westerly prograding fluvial system (Totterdell et al., 2009).

In the Namoi river basin the Jurassic and Lower Cretaceous sedimentary rocks of the Surat Basin unconformably overlie much of the Permian-Triassic sequence in the western half of the Gunnedah Basin (Gurba et al., 2009). The Garrawilla Volcanics generally form the base of the Surat Basin (Figure 21). Totterdell et al. (2009) noted that the Surat Basin megasequence consists of the fluvial to marginal marine sedimentary rocks of the Lower Jurassic to Lower Cretaceous, and includes four major depositional cycles, Supersequences J to M, of which Supersequences K to M are the equivalents of the Purlawaugh, Pilliga, Orallo and Mooga formations (Stewart and Alder, 1995; Totterdell et al., 2009).

According to Totterdell et al. (2009) the Late Triassic–Early Jurassic igneous rocks of the Garrawilla Volcanics, which consist of tuffs and flows of mafic volcanic rocks, have formed topographic highs onto which the Surat Basin sequences were deposited, indicating that this magmatism pre-dated deposition of the Surat Basin sediments. Ages reported for these igneous rocks range from 218+8 to 142+6 Ma (Martin, 1993). Martin (1993) has attributed an upper mantle origin and the geochemical signature of intraplate basalts to these extrusive and intrusive rocks which occur mainly as bodies or sills.

The Purlawaugh Formation, which is part of the Surat Basin sequence (Supersequence K as recognised by Totterdell et al. (2009)) is of Lower to Middle Jurassic age. The meandering fluvial and lacustrine sedimentary sequences, which extend northward into Queensland, have an average thickness of 30 m around Narrabri, but can be up to 76 m thick in other areas. Overlying the Gunnedah Basin, the formation commonly consists of a basal unit of mainly sandstone formed by meandering fluvial channel/point bar deposits, and is medium- to coarse-grained and partly conglomerate-rich. The upper unit consists of interbedded siltstone, shale, thin coal and sandstone interpreted as floodplain, channel margin and meandering stream deposits (Stewart and Alder, 1995).

The Pilliga Sandstone was deposited by braided fluvial streams (Stewart and Alder, 1995). It also contains minor interbeds of siltstone and mudstone (Goscombe and Coxhead, 1995). The Pilliga Sandstone and the Orallo Formation are the equivalents of Supersequence L, the beginning of which marks a period of basin-wide fluvial incision prior to the deposition of a thick succession of braided-stream sandstone sequences (Totterdell et al., 2009).

In the far west of the Namoi subregion the Pilliga Sandstone is conformably overlain by non-marine to marine sandstone, siltstone, shale and mudstone of the Orallo and Mooga formations (Stewart and Alder, 1995).

The Cenozoic alluvium includes the Upper and Lower Namoi formations, and the Gunnedah and Narrabri formations. These are described in the Hydrogeology Chapter.