The Namoi subregion can be described as four broad hydrogeological regions:

The eastern boundary of the Gunnedah Basin and the Namoi subregion is marked by the Hunter-Mooki Fault, an east dipping thrust fault. The fault developed during thrusting of the New England Fold Belt over the Sydney-Bowen Basin and marks a distinct break in the bedrock geological domains (Mullard, 1995 and Section 1.1.3).

Alluvial sediments of the Upper and Lower Namoi are usually subdivided into three formations: the uppermost Narrabri Formation, the Gunnedah Formation and the Cubbaroo Formation in the Lower Namoi area. These formations consist mainly of sand, gravel and clay and their thickness is largely controlled by the bedrock topography (Barrett, 2012). Contouring of the base of the alluvial sediments indicates they form continuous units across the Hunter-Mooki Fault, extending beyond the eastern boundary of the Namoi subregion.

The uppermost Narrabri Formation dates from the Pleistocene to recent and is generally 30 to 40 m deep, but can be up to 70 m deep. It predominantly consists of extensive clays with minor channel sands and gravel beds. This is the watertable aquifer which is generally low yielding and low to medium salinity. The aquifer is highly stressed due to over-extraction in accordance with permitted allocation. The Narrabri Formation aquifer is known to be highly interactive with the Namoi and Mooki rivers (Ransley et al., 2012a).

The Cubbaroo Formation is present in the Lower Namoi at the base of the alluvial sequence and is a confined aquifer of the Middle to Late Miocene (Ransley et al., 2012a). Cubbaroo Formation sediments occur below 90 m and consist of carbonaceous sand and gravel with interbedded clays (Kelly et al. 2007; Ransley et al. 2012a). The Cubbaroo Formation is associated with the main paleochannel, which is limited to the central and northern parts of the valley and does not generally follow present drainage lines. The sediments in the palaeochannels are coarser than other alluvial formations, allowing for higher extraction rates (Barrett, 2012).

In some areas there is no hydraulic separation between the unconsolidated alluvial formations and they act as a single aquifer, for example in the far western and eastern part of the subregion. In other areas, hydrograph analysis indicates there is minimal connectivity (CSIRO, 2007; Kelly et al., 2007; Parsons Brinkerhoff, 2011).

Hydraulic characteristics of the Narrabri and Gunnedah formations are generally well documented, which is not the case for deeper formations. The hydraulic properties of the alluvial aquifers are highly variable (0.008-31 m/day (Golder Associates 2010)) depending on the presence of sand or clay lenses, but hydraulic conductivity generally increases with depth and in the palaeochannel.

Kelly et al. (2007) emphasised that the alluvial sequences as described generally under-represent the complexity of the sequence and the interplay between clay, sand and gravel beds. The dominant sediments are sometimes reversed with clays dominant in the Gunnedah Formation at some locations and sand and gravel dominant in the Narrabri Formation at others. This complexity of alluvial deposits is to be expected, and it adds to the difficultly in conceptualising the hydraulic parameters and flow pathways within the alluvial aquifer sequence.

In the north and west of the Namoi subregion the alluvium is underlain by the Jurassic and Cretaceous rocks of the Surat Basin (a sub-unit of the larger GAB) (Kelly et al., 2007; Green et al., 2011; Barrett, 2012). The GAB is comprised of sedimentary rock layers that form aquifers and aquitards containing groundwater that is mostly under artesian conditions (CSIRO, 2012). The extent of the Surat Basin in the Namoi subregion is shown in Figure 23. 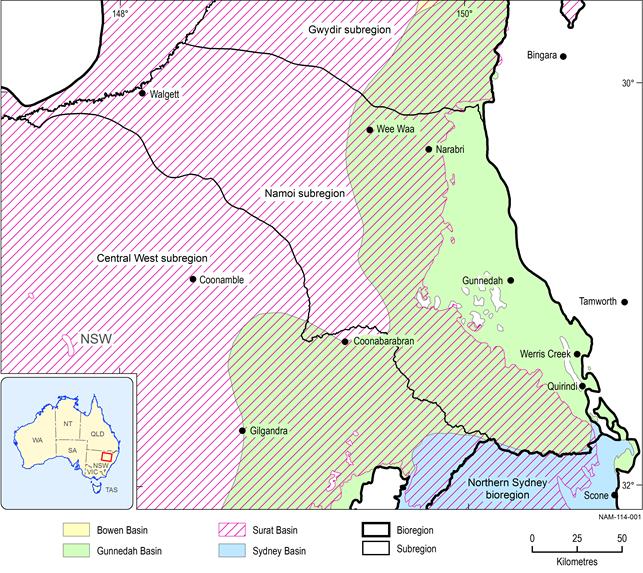 A stratigraphic table of the Cretaceous and Jurassic GAB sediments, and underlying Permian-Triassic Gunnedah Basin is shown in Figure 24. The overlying alluvial sediments are absent from this stratigraphic sequence.

The GAB Water Resource Assessment (CSIRO, 2012) included an updated correlation of the hydrostratigraphic units for the GAB (Figure 24).

Figure 24 indicates that the Wallumbilla Formation is a tight aquitard, the Pilliga Sandstone is an aquifer and the Purlawaugh Formation is an aquiclude (CSIRO, 2012), suggesting limited vertical connectivity with the underlying units. 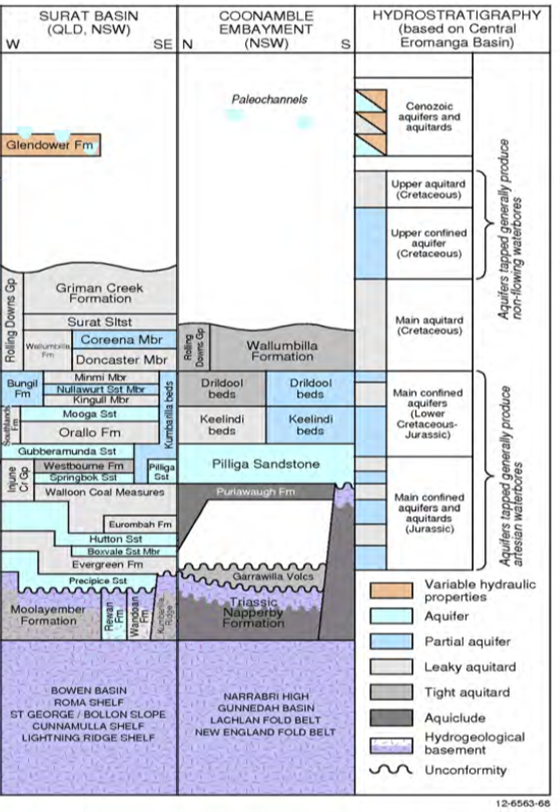 Figure 24 Hydrostratigraphic sequence of the Surat Basin and Coonamble Embayment

The sedimentary and volcanic rocks of the Permian-Triassic Gunnedah Basin underlie the eastern part of the Namoi subregion (see Figure 23) and are comprised of up to 1200 m of interbedded sandstone and siltstones of marine and non-marine origin with intercalated coals (Kelly et al., 2007; Barrett, 2012). The Gunnedah Basin unconformably overlies the Lachlan Fold Belt, which is the effective hydrogeological basement of the Namoi subregion. A stratigraphic table of the Gunnedah Basin sediments is shown in Figure 21.

The Gunnedah Basin is also known as the Gunnedah-Oxley Basin. The ‘Oxley’ component of the basin is not consistently recognised in literature, but is described in SWS (2011) as ‘a stranded portion of the Surat Basin’ that is ‘hydraulically disconnected’ and comprises ‘Pilliga Sandstone equivalent sediments’. It ‘directly overlies the Gunnedah Basin’ and is ‘located in the south of the (Namoi) catchment and to the west of Quirindi and forms a localised groundwater resource’. Mapping by SWS (2011) indicates the Oxley Basin outcropping in the south of the Namoi subregion.

The Gunnedah Basin sedimentary rocks are the focus of coal mining and CSG exploration within the Namoi subregion. Coal seams within the Permian Black Jack and Maules Creek formations occur both at depth and as surface outcrops. The principal seams for CSG exploration are the Hoskissons Coal Member, which lies within the Permian Black Jack Group; and the Bohena seam within the Maules Creek Formation (SWS, 2011). The Hoskissons seam, and associated minor seams, are also being targeted by open-cut and underground coal mining operations where they occur nearer to the surface (DPI, 2009).

In general, the coal beds within the Gunnedah Basin are considered to have a low hydraulic conductivity compared to the overlying alluvial aquifers (SWS, 2011). Hydraulic conductivity of the Hoskissons Coal Member at the Kahlua CSG site has been estimated from drill stem tests to range from about 0.33 to 3.3 m/day (Golder Associates, 2010; 2011), however much smaller values were obtained from testing at the Narrabri Mine (0.0086–0.02 m/day (Aquaterra, 2009)). Hydraulic conductivity values of the Upper Black Jack Group and the Digby Formation are assumed to be one to two orders of magnitude less, and thus are assumed to be aquitards (Golder Associates, 2010, 2011).

Bores are screened into the Napperby Formation and the Ulinda Sandstone (Digby Formation) in some places, but to a much lesser extent than the alluvial sequences as they are low yielding and not continuous. The Clare Sandstone is the only formation in the Black Jack Group with potential as a groundwater resource but due to its depth and the presence of more productive and shallower alluvial aquifers, the Clare Sandstone is not significantly utilised (Golder Associates, 2011).

There are a significant number of localised faults within the Gunnedah Basin sequence, with estimated displacements of up to 120 m (Tadros, 1993) which have the potential to cause a large disconnection across geological units. This faulting was not captured in the SWS study, although SWS anticipated that some of these faults may have a significant effect on groundwater flow characteristics (SWS, 2011).

The hydrogeology of Gunnedah Basin sedimentary rocks that host coal and CSG target seams is poorly understood and documented, because the focus of groundwater studies has traditionally been on unconsolidated alluvium. Consequently, there is very little published information on the hydraulic properties of the Gunnedah Basin. A small number of private wells do access these formations, mainly where the alluvium is absent, although they are not considered major groundwater resources. Hydraulic properties are limited to either testing work completed by the coal and CSG companies or published values for similar formations in other areas (Golder Associates, 2010, 2011; SWS, 2011).

Lower Permian volcanic rocks (the Boggabri Volcanics and Werrie Basalt) of the Lachlan Fold Belt form an effective basement for much of the Gunnedah Basin (Tadros, 1995) and the wider Namoi subregion. This basement varies in depth, forming a series of generally north-south trending ridges and troughs. Very little data exists on the hydraulic properties of the basal volcanic rocks (SWS, 2011).

A depth to economic basement map, developed under the SEEBASE Project, defines basement as the base of the Permian sedimentary material overlying the basement volcanics (SRK Consulting, 2011). This map is shown below in Figure 25.

The Hunter-Mooki Fault marks a distinct break in the bedrock geological formations. It is not known if there is significant groundwater flow across the fault to any great depth (SWS, 2011). In their geological model, SWS (2011) assumed there was minimal deep groundwater connection across the fault, given the properties of the geological strata involved and the lack of data to suggest otherwise. 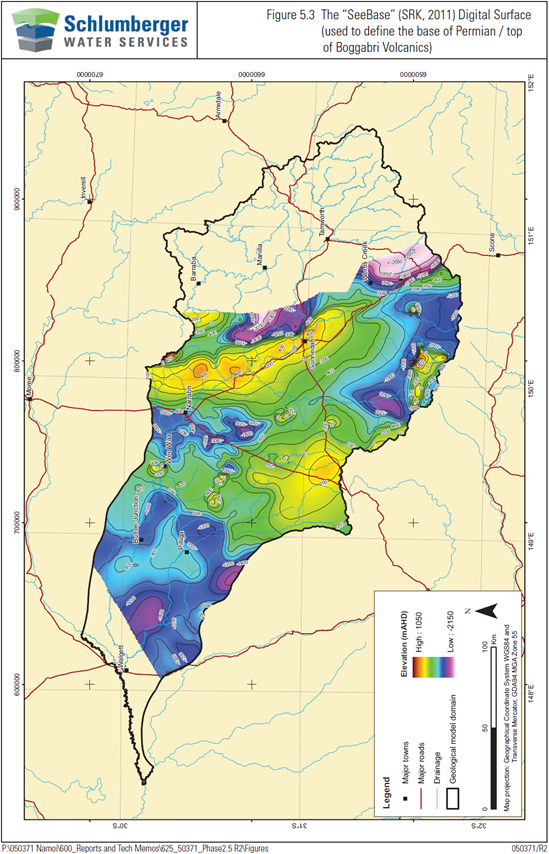 Figure 25 The 'SEEBASE' (SRK Consulting, 2011) digital surface (used to define the base of Permian sediments/top of the Boggabri Volcanics)

Source: SWS (2011). This figure is not covered by a Creative Commons Attribution licence. It has been reproduced with permission from NSW Department of Trade and Investment.